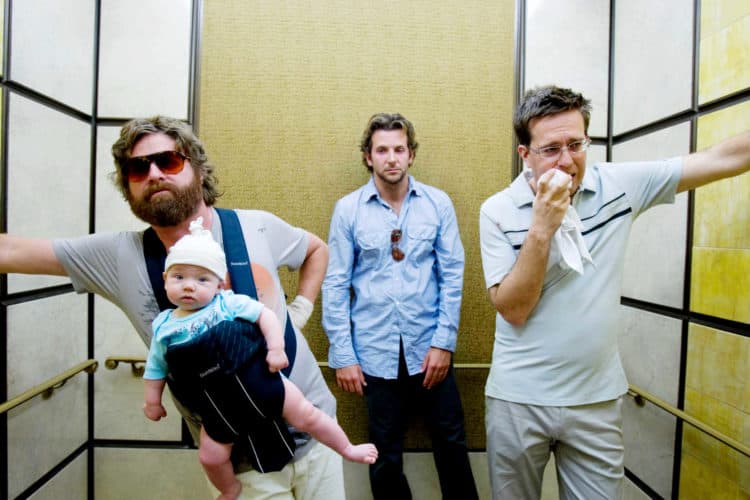 In 2009, The Hangover shocked Hollywood by becoming a critical and commercial success, with the film garnering nearly $500 million worldwide. Starring Bradley Cooper (A Star is Born, American Hustle), Ed Helms (Vacation, We’re the Millers), and Zach Galifianakis (Missing Link, Muppets Most Wanted), the film follows Doug and his three friends to a wild and unforgettable trip to Las Vegas. The Problem? The gang wakes up to a massive hangover that makes them forget their epic night and more importantly Doug! With little time before Doug’s wedding, the three hazy pals try to retrace their steps and find the groom in time to walk down the aisle. The raunchy comedy even won a Golden Globe for best motion picture – comedy or musical.

Naturally, when a movie exceeds expectations at the box office then it’s only wise to try and milk the cow as dry as possible. Hence the sequels The Hangover Part II (2011) and The Hangover Part III (2013); Both films were trashed by critics and fans, with Part II being a crude and darker carbon copy of the first film with an adorable monkey and Part III coming across as rote action flick with comedy. Either way, both films failed to match the success of the first Hangover movie. The franchise isn’t considered a flop since it amassed nearly $1.5 billion between the three films, but there’s no denying how the quality and audiences went down for each picture. So, what happened? Was it the fact that the sequels were an obvious cash grab to a film that didn’t a sequel? Let’s dive into the reason why The Hangover sequels failed to recapture the success of the first film.

The Quality of Both The Hangover Part II and III Dropped

Even if you’re someone who completely despises the rotten tomatoes scoring system, there’s no denying that the quality of The Hangover sequels. The issue is that the premise of the first film is too thin for multiple movies. It was clear that the first film was intended to be a one-off; however, the unexpected success of the comedy had executives making the movie an unnecessary franchise. In truth, The Hangover Part II isn’t too bad, but it’s nowhere near as good as the first film. What made The Hangover so fun was the unpredictability over what would happen next; however, the beats of the first movie were way too familiar in the second installment, thus making a highly predictable sequel with some funny moments here and there.

Part III was wise in deviating in the formula, but the problem is the script became this bad action/comedy. One of the core issues is bumping up the roles of Ken Jeong’s Mr. Chow and Zack Galifianakis’ Alan. Some characters are only met to be sidekicks and those two perfectly fit that bill. The personalities of Alan and Mr. Chow are more so annoying than funny, as both men lack true depth beyond the traits that they were given in the first film. Jeong and Galifianakis felt trapped in a character that couldn’t evolve because the filmmakers likely didn’t want to strip away the characteristics that made both men such a popular brand coming out of the 2009 film. The Hangover should’ve stayed at one film; however, Hollywood is a business first and foremost, thus it’s not surprising that the executives wanted to milk the franchise dry.

The Effort Never Felt There With The Sequels

Let me make this clear, I am in no way in shape, or form stating that Todd Philips didn’t put any effort into the actual films. However, I am making the claim that it didn’t FEEL as much effort was put into the sequels. Ok so, The Hangover Part II and III were cash grabs; however, the doesn’t mean that the quality can’t be good. Yes, I just went through a whole paragraph or two about how a Hangover sequel should’ve never been made; however, that doesn’t mean it’s impossible to make a good film. Films such as Toy Story 4, Blade Runner 2049, or Doctor Sleep are deemed unnecessary sequels; however, those films are pretty darn good and make a strong case for their existence. As previously stated, The Hangover Part II just felt like a copy and paste model of the first film. However, if the filmmakers took some risks by deviating from a few notable beats of the first film then this could’ve actually been a good and unpredictable movie.

The third installment felt as if the filmmakers were unfortunately stuck with the goofy characters of The first Hangover and needed to make a script around them. It was nice that the writers opted to deviate from the known formula; however, they chose to focus on the wrong character, one of the biggest mistakes to make. There’s a delicate balance when it comes to the subject of mental illness; however, the film chose a dark and nastier way to get into the actual plot. There are some sweet moments here and there but the film is a generic thriller that doesn’t have the energy of the first or second film. The cast and crew Hangover Part III felt ready to move on from the series and luckily, the third installment was indeed the last.