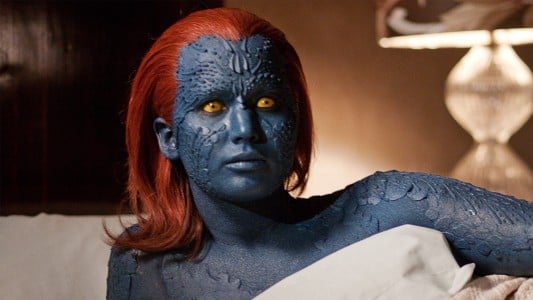 Mystique is a fascinating character. Raven Darkholme made her debut in Ms. Marvel #16 (April 1978) and has been one of the prime X-Men villains in both animated and live-action films. Mystique had a solid run in the original X-Men trilogy. She wasn’t given the depth of the story like Magneto, but she was still one of the more prominent features in the film. Was Mystique used to her greatest potential? No, but that can easily be said about any cast member who isn’t Wolverine, Magneto, or Charles Xavier. The key thing is that Rebecca Romijn always felt at home whenever she came on screen as the X-Men villain. Her performances were the embodiment of who Mystique was and she’s easily the best version of the two live-action Mystiques.

Now, that leaves Jennifer Lawrence’s version of the character. In X-Men: First Class, the filmmakers opted to take a different direction of the character by putting her on the side of good with Charles Xavier. Mystique wasn’t the main focal point of the feature, but it was a smart idea to shake up the dynamic between Charles, Magneto, and Mystique. However, Jennifer Lawrence started blowing up big as an A-list star thanks to her role as Katniss Everdeen in The Hunger Games, and noticeably, Mystique became one of the main characters in X-Men: Days of Future Past. Again, the dynamic between the central characters remained intriguing, and promoting Mystique as one of the main characters of the franchise was an interesting call. It was nice for one of the side characters to finally be showcased that truly explored the world of Mystique and the origins of the shapeshifter herself. However, once X-Men: Days of Future Past was all said and done, there was one notable weakness in an otherwise great film: Mystique. Believe it or not, it wasn’t the character itself or the way she was written. It was actually the performance from Jennifer Lawrence.

Now, to be clear, Jennifer Lawrence is one of the best actresses working in Hollywood today. Her performance as the emotionally damaged Tiffany in Silver Linings Playbook was excellent. Her career-defining performance as Ree Dolly in Winter’s Bone remains one of the top three movies in her strong filmography. However, the energy from both Silver Linings Playbook and Winter’s Bone was never felt when Lawrence was playing Mystique. There’s no denying that Lawrence’s role expanded because of her growing popularity, and while Mystique’s character has enough backstory to carry a feature film, it simply felt as if Lawrence was going through the motions as Raven Darkholme. Perhaps this was a case where Lawrence was simply miscast as the original X-Men character. There’s no telling whether Lawrence was truly invested in her role as Raven Darkholme. Thus far, the only negative thing that Lawrence has said about the X-Men franchise is about the make-up she had to do to play the part of Mystique. Either way, there seemed to be a disconnect between Jennifer Lawrence and Mystique as she felt muted and uninterested despite acting alongside the extremely talented Michael Fassbender or James McAvoy.

I can’t put the full blame on Lawrence as the potential of Mystique wasn’t truly tapped into. Her story in X-Men: Days of Future Past was solid, but it’s clear that there was never a true plan to mainly focus on her character throughout the franchise. Of course, I wasn’t behind the scenes with executives and writers during the making of these X-Men movies so my certainty around that statement is exactly clear. However, compare how prominent of a figure Mystique was in X-Men: First Class to her sudden transition in Days of Future Past. In Apocalypse, it felt as Mystique was shifting into a movie feminist role. The focus wasn’t on Mystique as much in the third film, though she was still one of the main characters in the X-Men role. Despite the amount of screentime that Mystique has received, we never get much of intimate side of the character unless it invokes a jealously battle between Charles and Erik. The films don’t particularly explore Mystique past enough, nor does it play around much with the dynamic outside of the Charles/Erik relationship. As I previously mentioned, Mystique the character could easily headline a feature film. Where did she come from? How did she gain her shape shifting powers? There are tons of interesting layers of Raven that could’ve been explored. Outside of Days of Future Past, Lawrence isn’t given much meat to chew on. Sure, she’s one of the primary characters in the franchise, but at the end of day, her version still pales in comparison to Rebecca Romijn.