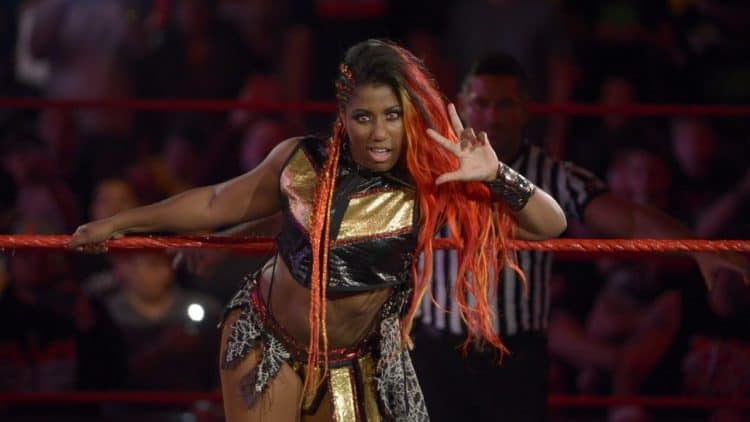 Ember Moon is the definition of a missed opportunity. The former NXT Women’s Champion first made a splash on the independent scene before officially signing a contract with the company back in 2015. However, Moon wouldn’t make her debut until a year later, defeating Billie Kay at NXT TakeOver: Brooklyn II. The match wasn’t anything to remember as it was mainly a squash bout for Moon; however, one thing stood out about the new NXT talent, her finisher The Eclipse. That moment had the wrestling world talent buzzing about the new female prospect that was entering the best women’s division on the planet. The great thing about Ember Moon is that she seemingly had a cool gimmick. She seems to be this dark warrior character, though the name probably suggests a gothic/vampire inspired gimmick.

Unfortunately, that was also Moon’s biggest problem. No one could define just who Ember Moon was. She had this cool aesthetic that made her stand out from the other women on the roster; however, it oftentimes came across as she was cosplaying as an anime hero. Because audiences couldn’t exactly nail down just who Ember Moon was, it was harder to feel a connection to the talented wrestler. However, sometimes being talented gets you far, and Ember Moon got over thanks to her tremendous wrestling ability. Her feud with Asuka really helped elevate the former NXT star, and though her character still needed some fine tuning, she was well on her way to being one of the most over acts in the development brand. Though she was given the NXT championship the following month, she wasn’t allowed to really do anything with the belt because officials were giving Shayna Baszler a huge push. She made her main roster debut a short time after dropping the NXT Women’s title, even though she wasn’t exactly ready for the big move.

Two issues really plagued Moon’s main roster run: injuries and the lack of compelling stories. Let’s be honest here, WWE doesn’t exactly know how to push babyface wrestlers. It especially doesn’t help that her character wasn’t established. The thing is that the main roster is vastly different from NXT. The developmental brand cares more about wrestling than character, but it’s vice versa on RAW and Smackdown. However, in the modern age, characters are the most valuable thing in professional wrestling. Anyone can be a great wrestler. The key to standing out is being a strong character. Despite bursts of strong moments, Moon was never treated as a star or anyone that the company truly wanted to push as a top female athlete. Bayley vs. Ember Moon should’ve been huge at Summerslam, but the match was flat because audiences didn’t care about her whatsoever. There was never any story that really got the fans on Ember’s side. She really wasn’t able to showcase her personality to the world. The match was met with crickets and instead of trying to do something with the former NXT Women’s Champion following her Summerslam bout, she faded to the back for the most part. The injuries derailed any momentum that she could’ve had, though given the fact that she was lacking in direction, it’s not completely her fault that she was chasing after the joke 24/7 championship.

Ember Moon’s return to NXT was much needed and putting her in a tag team with Shotzi Blackheart opened up some interesting possibilities. However, again, she wasn’t given much of a chance to develop as her and Blackheart quickly dropped the belts. NXT had a chance to not only freshen up her character, but really give Moon stories that could get the audience on her side. They didn’t. Her run overall felt directionless, and despite being given a seemingly cool character and a sweet finisher, creative just didn’t seem to know how to use Moon. It was odd that the company released her because she brings tremendous value to the division. However, it was clear that Vince McMahon and company just didn’t see her as a star. This is disappointing because Moon has a huge upside and considering the fact that the company continues to struggle with having a well-rounded women’s division, she could’ve been the future. But she wasn’t really given that moment to connect with the audience. The former NXT Women’s Champion will surely excel wherever she goes; Hopefully the next company that gets lucky enough to grab the former Ember Moon will be able to treat her better creatively. She’s in the upper echelon when it comes to in-ring work, but if she can just nail down her character then the former WWE star would the perfect package.