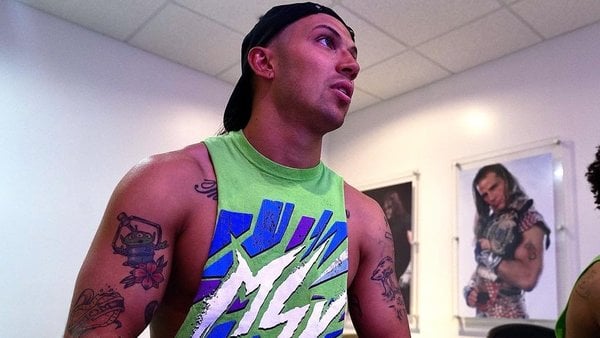 One-half of the WWE NXT Tag Team Champions is officially gone from the company. In recent weeks, Nash’s wife, Kimber Lee, has posted various incriminating messages in regard to her husband. Surprisingly, the company and Nash himself ignored Lee’s statements, with creative actually giving him and Wes Lee the tag belts for the second time in their careers at NXT: Stand & Deliver. However, Lee released a photo that showcases Carter doing the controversial Nazi pose with a Hitler-looking mustache. Following the picture, Nash was reportedly fired hours later, and the company stripped the belts from MSK and new NXT Tag Team Champions were crowned on the April 12th episode of the developmental brand. The decision appeared rash and according to several notable news sources, Carter was fired for the Nazi photo. Officials didn’t reportedly deem Lee as a credible source, which is why they never took action against the allegations.

Obviously, this is a tricky subject and since I’m looking from outside of the situation, it wouldn’t be fair to give an exact opinion on what WWE should’ve done. The issue lies with how backward this situation feels. Exactly what’s the meaning behind the Nash Carter photo? Based on the picture, it seemed like the guy was taking a goofy picture that he sent to family or friends. Does Carter have ties to any Nazi group or any other forms of racism? Does he have any criminal history involving race, such as hate crimes or something similar? I don’t know how in-depth WWE went into this situation because as it stands, it simply sounds as if the company instantly fired him after Lee released the photo. If this was just a silly photo that ultimately means nothing, then WWE was in the clear wrong for simply firing the guy because of a rash decision. The reason I deem this backward is due to the fact that the focus should’ve been on the domestic violence accusations.

Given the fact WWE never reacted to the allegations (at least publicly), it’s possible that the company did some investigative research before coming to the conclusion that Lee’s stories couldn’t be trusted. However, the narrative sounds as if WWE didn’t buy any of her statements based on their past working relationship with the superstar. First, it is skeptical that Lee is going out of her way to tarnish Carter’s name on social media. If she has proof of Carter’s alleged abuse, why not go to the cops and file a police report? To be clear, I’m not accusing Lee of lying as I’m not someone who knows what’s going on between the two; however, I’m also not going to pretend that it doesn’t sound fishy that she chose to go to social media over filing a police report.  Still, WWE should’ve taken the allegations more seriously and addressed Lee’s claims. The company trying to sweep this situation under the rug seems as if they didn’t exactly value her claims. Again, WWE could’ve done a thorough investigation on the accusations, but there’s no claims on that being the case. If Nash did these horrible things, then he deserved to be fired. In fact, he should be going to jail! But I would understand WWE’s positioning if this was a battle of he said/she said. Lee is a professional wrestler herself, so it could’ve been possible that she got those scars from a match.

It wouldn’t be the first time that domestic abuse accusations were proven false. If Lee did falsely accuse her husband of a crime that he didn’t commit, then shame on the former WWE star. This is a man’s livelihood at stake, and now, Nash Carter may never get another job in the business because of this whole ordeal. From the offset, it does seem that WWE made a hasty judgment in letting the former NXT Tag Team Champion go, which is a shame because Carter is a tremendous talent who doesn’t deserve his name to be smeared. Again, I have no knowledge of behind-the-scenes affairs, so I’m solely basing my opinion off what’s been reported thus far. Hopefully, this situation is cleared up and the truth comes to light. At the end of the day, you can’t particularly blame the company for firing Carter. These accusations are damaging to their family brand and WWE shouldn’t take a hit for a guy who may or may not be innocent. The situation sounds murky overall, but the decision to fire Nash Carter was an understandable one.