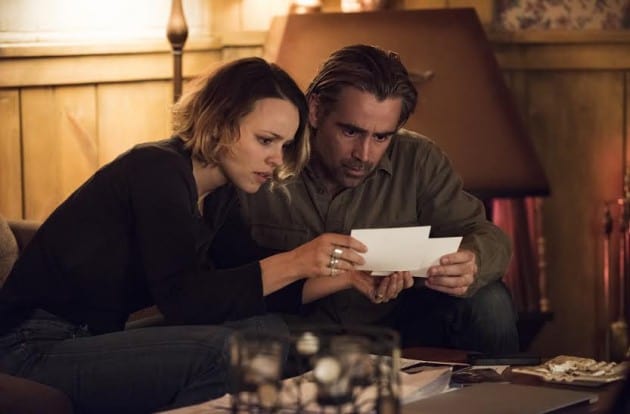 With so many engaging scenes and momentum-building moments, “Black Maps and Motel Rooms” should be the best episode of True Detective‘s second season. And it very well may be, removing itself from the personal lives of its characters (for the most part) for an episode heavy on the meat and potatoes of the Caspere investigation. Yet, it takes such a careful hand navigating the black maps of True Detective‘s titular hotel rooms: it is undeniably an episode packed to the brim with exposition, burying many of its intriguing elements under details that only get more and more obscure with every layer. As with most of this season, it makes a lot of the dramatic material difficult to engage with, as well crafted the intensely personal, close-up filled interludes of “Black Maps and Motel Rooms” may be.

So it turns out the Caspere case has a history; Casper and his corrupt police friends murdered jewelry store owners in 1992, stealing valuable diamonds and accessing the city’s larger corrupt municipalities. Twenty lavish years and many sex parties later, Caspere’s latest plan to manipulate someone (Frank Semyon) backfired, when he himself got ripped off and cut out of the picture after pissing his corrupt friends off. With Osip’s people already in place, all they needed was Blake to turn on Semyon, and then everything he owned would be theirs; to say the antagonists of True Detective are a culture of takers is an understatement.

However, these antagonists are mostly names and jumbled faces: there’s no emotional stakes to Chessani’s son ripping him off from underneath his nose (seriously – that kid is a criminal mastermind?), just as there’s really no impact to Blake’s betrayal of Frank, because there’s been no time spent building these important, plot-affecting characters. Eight hours is not a lot of space for such an intricate, sprawling plot and the time to put in the character work before hand to give these moments, whether shown or alluded to, any sort of real impact. The season’s tag line is “we get the world we deserve.” I guess we’re just supposed to assume we’re all screwed?

By that token, it makes sense that Paul Woodrugh meets the end he does. We’ve all heard of the “bury the gay” trope, and watching another depressed character struggling with his sexuality ends up being killed before the climatic moments. Turns out his friend Miguel was “checking up on him” for PMC (who know works for Catalyst, the big corrupt company at the top of the food chain), and chides him for not just “accepting how he was,” because it would’ve solved all his problems in the world. Thirty seconds later, they’re both dead, reinforcing Jerrod Carmichael’s wonderful observation that American cinema’s most beloved gay characters are the ones that “die in under an hour and forty minutes.”

In the end, True Detective‘s masculinity play is more about reinforcing ideals than challenging them, a world full of swinging d*cks that spend their time sword fighting over the scraps of humanity left, drowning themselves in indulgences and laughing at their utter control over everything (like murdering Davis in a parking lot right before she met with Ray, which elicits a hilarious “dramatic” exit from him as he scrambles from the scene). Ani’s father feels bad he couldn’t protect his daughter from being raped in the woods for a week, Paul keeps asserting that he’s being a “good man” by hiding who he really is, and Frank is idolized for his pathetic attempts at taking back all the power that’s been ripped from him (basically, a big temper tantrum, led by a fun scene where he murders Blake and yells at him for defecating on his carpet): everything that appeared to be challenging the conventions of detective noir has only reinforced them, overlaying these typical characterizations with a plot littered with unnecessary complexities, heaping on details that only exist to fill the space between one predictable encounter and the next.

There are moments of genuine intrigue in “Black Maps”; with the stakes raised on the three main character’s lives, there’s at least some tension added by the fact powers unknown and unseen can strike at any time. But what kind of tension is that really? There’s really no hope for Ani or Ray to ever be happy human beings; we’ve spent seven episodes establishing just how very irreparably broken they are, nothing that’s going to change after they have sweaty, stressed out motel sex with each other. Plus, we get Ray admitting he has no idea how to handle a woman like Ani sexually, which brings us back to the character’s introduction and the shows obsession with her sexuality, even though it doesn’t actually want to depict it in any sort of way (and no, I’m not asking for a big sex scene; but “she’s weird in bed because she got raped” just doesn’t work for me); there’s nothing about that moment that feels hopeful, or even necessary: it just follows the “put two good looking white people in a room long enough” trope, and assumes we’re in for the ride.

Despite all the narrative funneling we see in “Black Maps and Motel Rooms,” next week’s “Omega Station” is still going to be a 90-minute finale, which means we’re in for a lot more hard stares and dark rooms, lit by that ever-elusive light characters are chasing, but can never find (Paul’s walk into the light literally killed him, so good luck finding a positive ending for anyone here). Minor characters will suddenly have major influence on the plot, and nobody will be allowed to crack a smile (especially while Frank is cracking heads): “Black Maps” makes it very clear things in Vinci and Ventura (and maybe Velcoro) are coming to an end, but under its avalanche of detail-dropping and table-setting, never has a chance to make any of this matter beyond “the good-looking stars might die!” As much as the first season of True Detective dropped the ball with its story, it always had its philosophic musings and cinematic atmosphere to fall back on – season two doesn’t have that, and heading into its plot-heavy conclusion, is suffering mightily from it.