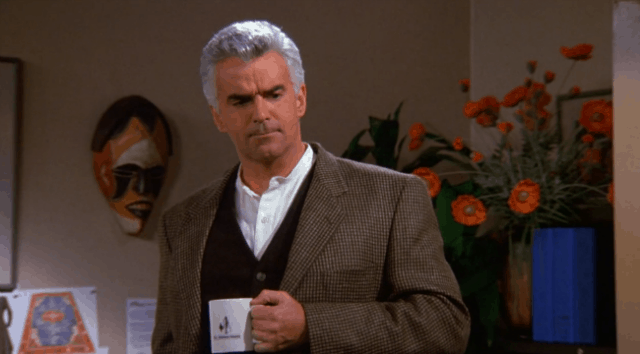 As the owner of his own catalog of goods Peterman is a bit of an eccentric and, once he meets Elaine, in a good deal of trouble considering that she simply cannot keep from doing very stupid and very accidental things. He’s not all there some would say, and they would be right. After all this is a man that made his way to Burma to try and distance himself from his problems at one time. As one of the characters in Seinfeld he is probably least remembered by many but just watching his clips might jog your memory and remind you just why J. Peterman was actually kind of funny.

Seriously, the guy ran away to Burma to get away from his issues. If that’s not eccentric I don’t know what is.

It could have been called the beginning of the end for Peterman when he bumped into Elaine on a rainy street one night. But somehow they struck up a conversation even though Elaine was sobbing her eyes out and barely coherent enough to be understood. Plus, it helped that they could talk about her fashion sense considering that her coat fame from Peterman’s catalog.

And he makes his way to Burma. You have to wonder what it was that really set him off to make Peterman take this kind of leap all the way from the states to a place like Burma. Wasn’t that place a war zone at one point and time? It doesn’t seem like the kind of place you’d actively try to get into, even if wasn’t as dangerous as others might make it out to be. But then that’s Peterman, he does things that make the rest of us go “huh?”.

Ever notice how the characters on Seinfeld just do things without really thinking about it? Seriously, who just eats a piece of cake without thinking about who it belongs to first? Somehow I think she might have been ready to choke on that single bite when Peterman revealed what it really was and how much it cost. I really hope that Elaine found it to be one of the most delicious pieces of cake ever.

You’d almost expect a guy that talks and acts like Peterman to have a home that’s decked out in finery. You kind of think that he owns shelves upon shelves of books, antiquities, pieces of art and historical trappings that might define a man of his seemingly impeccable taste. His apartment is one step above a college dorm really. Put in a table that used to be a cable spool and the effect would be complete.

Don’t give Elaine anything to twiddle in her fingers. DON’T DO IT. Chances are she’s going to keep twiddling and twiddling and eventually that piece of something is going to fly off and hit someone. Oops. But seriously Peterman it was a rubber band. If it had been used to fire a sharpened pencil at his ear it might have been different, or a paper clip with some actual mass. But a piece of rubber snapping you in the ear? Come on, most of us got worse than that in grade school.

So Peterman wasn’t the most stable person on the show, but it’s also true that he wasn’t one of the main characters, so that’s easy to forgive.