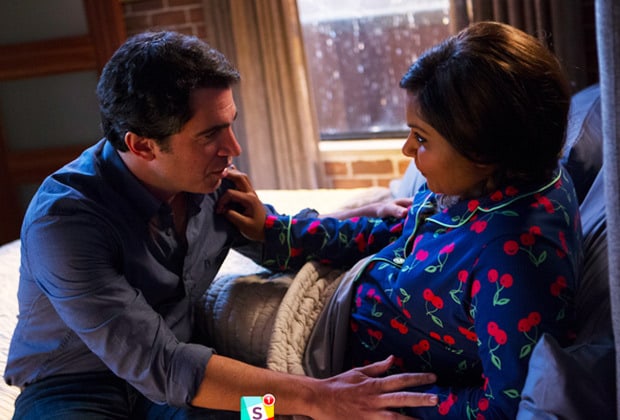 Fall “TV” season has officially arrived! I’m using “TV” loosely here because we’re not watching The Mindy Project on a traditional network or even cable channel anymore. Hulu swept in and saved Mindy and friends from a premature cancellation this past spring. We should all feel so blessed Hulu stepped up to the plate because not only did they pick it up, but they ordered a 26-episode season! That’s a win-win situation all around.

Seriously now, imagine if we were left with the cliffhanger from the last season finale. Mindy and Danny were on rocky terms, and I don’t know about you, but I could not live without cold hard proof that this power couple lives on happily ever after. This season premiere picks up right where we left off, with Danny flying to India to meet Mindy’s parents unbeknownst to her. I’m not entirely sure if he even knew why he was going through all this effort since he apparently didn’t actually change his mind on marriage – yet.

Sakina Jaffrey and Ajay Mehta were perfectly cast and written as Mindy Lahiri’s parents. It’s easy to see the influence they’ve had on their children’s lives and vice versa, as Mr. Lahiri at one point quotes his son Rishi saying, “Get a grip, dude!” Parents are usually a child’s first teacher, so Mrs. Lahiri most definitely passed down her flair for the dramatics to Mindy. Personally, I can’t wait to see more of the entire Lahiri family together. And what better occasion to gather than the impending birth of Baby Castellano? Perhaps a wedding now too, depending on what happens first. With an extended season, we’re bound to get all that and more.

While all that was happening in the “real” world, Mindy was experiencing an alternate dream world where she fell in love with someone far less complicated than Danny. In the style of Sliding Doors, she fell asleep pregnant and unmarried but woke up married to Matt (guest star Joseph Gordon Levitt.) Literally the man of Mindy’s dreams, Matt is a Real Housewives series producer. Their big and beautiful apartment didn’t mean much when Mindy discovers in this dream world that she’s having an affair with Brendan Deslaurier. She freaks out only to find Matt cool as a cucumber with the news of his wife’s affair because they have an open relationship. Mindy may have wanted a ring from Danny, but this really shakes her up. Above anything else, she wants a committed and loving partner in life and parenthood.

The most interesting part of this whole alternative universe was finding out what a “miserable meatball” Danny was without Mindy. Had he never gotten up on that plane back from Los Angeles two years ago and kissed her, she might have really met and fallen in love with Matt the producer. Let’s be honest, if that happened, the show would not have lasted as long as it did. Danny and Mindy complement each other. They’re a prime example of opposites attracting. Like Mindy tries to explain to alt-Danny, he tells her when she’s being an idiot and sometimes she needs to hear that to keep herself in check. Relationship goals, am I right?!

Just when Mindy wakes up from her nightmare, Danny is finally back home. She instantly forgives him and begs for his forgiveness in return when he tells her where he’s been. With Mindy’s parents setting an example of a successful arranged marriage, he really has no other option but to wise up and realize that what he and Mindy share is equally magical. Of course, Mindy accepts his proposal in the sweetest close to an overall perfect season premiere. Yay!

It’s safe to say The Mindy Project is still fresh with even slightly raunchier humor (hello, Mindy’s joke about spending half her life on her knees in Danny’s office in her dream!). The parade of guest stars that always bring something special to the show has only just begun. Frieda Pinto’s overreaction to Mindy sitting on her during her date with Danny brought out the extra snark in Mindy that always guarantees a laugh. I especially love the fact that Morgan and Mr. Lahiri are such good friends already, because why wouldn’t Morgan send him birthday gifts every year?! Oh Morgan, I’ve missed you (and your new annoyingly squeaky shoes) the most. Hopefully, now that everyone is on the same page about Mindy’s mysterious baby daddy, the Lahiris will make a trip down to the city once they’re back in their beloved Boston. Better yet, Mindy should make sure to drag Danny up to Boston for a Red Sox game with her dad.

-”It was so awful. It was like It’s A Wonderful Life except it was in color and it wasn’t boring.” – Mindy recounting her dream to Danny

-“Our daughter is a 35-year-old pregnant woman with a Bart Simpson tattoo.” – Mrs. Lahiri justifying their decision to Danny to arrange a marriage with any number of willing suitors for Mindy

-“Go and take care of our daughter. You can call it whatever you like.” – Mrs. Lahiri giving her blessing to Danny after learning the truth

-”Judging by your build and your denim jacket, I just assumed you were an old Native American man.” – Matt telling Mindy how they first met on the plane from L.A.