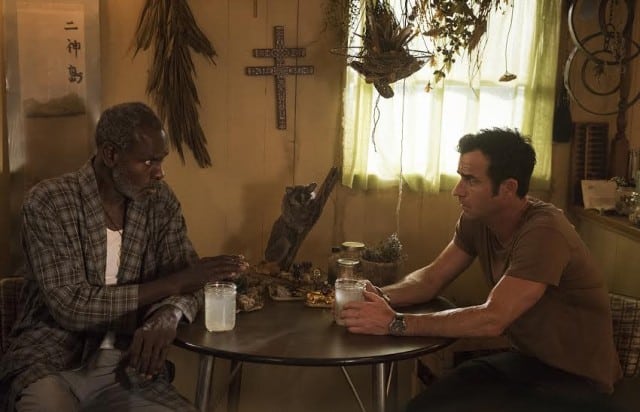 The Leftovers presented its most shocking character death yet in this powerfully dramatic episode.  It’s been clear from the start that Kevin isn’t mentally stable, but now, he’s completely unraveled.

Patti is the tip of the iceberg of issues inside Kevin’s head.  Fortunately, Michael reintroduces him to his grandfather, Virgil.  Having had his own inner demon vanquished, Virgil can relate to the parasite that is Patti.  We heard before that John shot his father, but I wonder if John realizes that he was actually saving him.  It all makes sense when Virgil explains how dying is the only way to get rid of this “most powerful adversary.”  We even get an answer about how Kevin ended up in the bottom of the drained lake with the cinder block tied to his ankle.  He was indeed trying to kill himself after his first meeting with Virgil, one that he has no recollection of at all.

At this point, Kevin’s had a bad day already.  Nora left him because he told her about seeing Patti, and advised he doesn’t call her anymore.  Even Jill starts to doubt his intentions in moving to Miracle and starting this new family.  She actually asks him if he was pretending all along.  I don’t think that’s true, because he really did hope to get rid of Patti by ignoring her enough.

Laurie came close to saving Kevin.  She really tried to get through to him with the cold hard truth that he needs psychological help.  Instead of agreeing to go back into Miracle with him, though, Laurie should’ve put him in her car at the motel and driven him as far away as possible.

Kevin may never get the chance to make up for this lie to Nora now that he’s pretty damn dead.  He made up his mind to let Virgil “free” him, no matter the huge risk.  Seriously, how did Kevin suddenly have enough faith in this strange man to bring him back to life?  The story about the guy atop the pillar being another “success story” of this method should not be taken as a flying endorsement for a normal life to follow this death and rebirth.

Michael may or may not be the key to all of this.  He was the one to direct Kevin back to his grandfather and he’s the one who drags his lifeless body out of the trailer.  For a teenager of faith, he really kept his calm when he discovered his grandfather’s suicide.  As a matter of fact, he barely reacted to the blood and brains from the fatal gunshot wound on the wall.  Almost as if he knew all this was going to happen.  Very, very suspicious.

Let’s say Kevin is dead, and Michael can’t restart his heart.  That doesn’t mean he’s necessarily off the show for good.  He could become Tommy’s own version of Patti, essentially a lost soul clinging onto the world for answers.  If Kevin does come back to life miraculously, Patti will more than likely be gone – but what if she isn’t?  What if Kevin is stuck inside this hell on earth with no way out?

What did you think of this episode of The Leftovers?