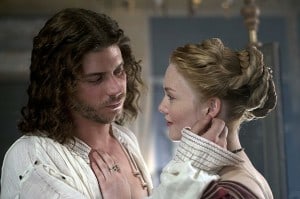 Alexander is refusing to back down from his punishment of the offending Cardinals, meaning that they’re hereby banished from Rome and all of their property will be seized and donated to the Mother Church. Every Cardinal goes along with it except for Cardinal Versucci, who loses his position as Procurator of the Office of Public works; as he leaves the Vatican for parts unknown, he steals several documents from his office before setting the place on fire with a candle. Luckily, no one is hurt and there’s only minor damage.

However, the treasury wasn’t healthy to begin with, according to the State of the Army report ordered by Cesare. To be at full strength, the papal army needs to be 10,000 strong; they currently have less than half of the men necessary to defend the papacy, as well as 6/10 the amount of horses and 1/2 of the weapons and supplies to aid said men. As a result, Cesare is ordered to go to Naples and, in addition to solidifying their alliance, assess how they are in terms of supplies. Do they have enough men to bring the papacy to full strength? Are there enough supplies in which to arm, clothe, and feed the papal army?

While he’s getting ready for the journey, of whose length he’s not aware of, Lucrezia asks if Alfonso can accompany her brother, seeing as how he’s frightened of Lord Borgia and couldn’t ask himself. Cesare agrees and pledges to do the utmost he can for Giovanni to be accept by King Ferdinand. Once he arrives in Naples with Alfonso and Micheletto, he notices how badly the French left the city: ill, indigent people, rusty armor, little swords among them. Ferdinand tries to roll the red carpet out as best as can, boasting of having over 10,000 men at his disposal, but a short exploration by Micheletto and Cesare’s instincts prove that he’s inflating the importance and stature of his city in the name of the impending wedding.

That carries over to further negotiations about the marriage. While Lucrezia’s title (Duchess of Bichelli) comes with no objections, Cesare again tries to reason with Ferdinand about Giovanni. He claims that the child does not have to be paraded in public; he can be accompanied to Naples by a nursemaid, but he doesn’t need to be separated from his mother. In turn, Ferdinand touts the family lineage that goes back to kings and queens of yore, claiming that they’re not known to have children by stable hands. Cesare then threatens the stability of their alliance, insinuating that Rome can find other cities to align itself with, before starting in on Alfonso, who didn’t say anything in defense of his bride or son.

Meanwhile, in Rome, the Duke of Aquitaine has arrived talking of peace and favors from Alexander. Louis XII, by all accounts an intelligent and thoughtful ruler, is not happy with the wife that he was promised as a young man. The woman, who turns out to be ghastly unattractive and likely barren, has made everyone in court wish for an act of God, if only to free the line of royal succession from the death grip she has on it. It turns out that the Duke wants Alexander to grant Louis an annulment, seeing as he’s the only one with the authority to do so; Alexander nearly drools at the concept of having two states in the palm of his hand in Naples and France.  After the failed assassination attempts on him and his family, he’s going to stop at nothing to acquire the power, resources, and leverage needed to thwart any attempt on the throne, so he tasks Cesare with going to France after Lucrezia’s wedding. There he will deliver the annulment and find himself a bride.

Lord Borgia first has to deal with Lucrezia, furious at Ferdinand’s refusal to claim her child. She’s become quite depressed about the thought of being separated from Giovanni and questions whether or not she’ll ever be happy. Her one constant, her relationship with her brother, is put to the test when she learns that he’ll be heading to France after her wedding; if nothing else, Lucrezia could always count on having Cesare around, so now that she’ll be handcuffed to Naples, she needs him more than ever. However, that’s not possible in a family defined by its ambition, so for now, she’s stuck in a situation she doesn’t want to be in with a man she doesn’t love, all the while trying to please a father who views her more as a pawn than a daughter.

It seems that Lucrezia’s wedding will be the site of a standoff between the Holy Father and King Ferdinand, the latter of which has invited half of the Lords of the Romagna families, as well as Catherina Sforza, to be his guests for the evening. The Romagnas have been egged on by Rufio as to what the Borgia Pope took from them and the weakness of the papal army, so they’re coming to the event ready for a fight and scoping out any potential weaknesses to exploit. As much as Cesare wants to make a public stand against Ferdinand and Naples, no doubt motivated by his simmering hatred of the King for his treatment of Lucrezia, Alexander will not allow it. Any sign of weakness will work against them and have the whole of Italy questioning the foundation of the papacy. Therefore, even with firmly gritted teeth, they have to welcome every guest as if they were, well, welcome.

Alexander welcomes each of Ferdinand’s guests, telling Catherina that he was beginning to doubt whether they could ever get her to kneel before a man, but Alfonso isn’t feeling as friendly. The boy confronts Ferdinand about inviting people who meant the Borgia family harm and nearly killed his soon-to-be wife in the process. For his part, the King encourages Alfonso to merely play his part in the game and leave the bigger moves to his elders, which he does by marrying Lucrezia. Cesare, meanwhile, has taken every pin on the seating arrangement chart and rearranged them, allies on one side and enemies on the other. Alfonso, you ask? In the middle with a question mark by his name.

At the wedding reception, Catherina and Cesare (figuratively) dance around each other as she does her best to flirt with him, just before he has a run-in with Roberto Orsini that ends with the latter being thrown out. Catherina, though, informs Rufio that those who pledge their swords to her will receive everything that was taken by Alexander, in addition to a divided Borgia estate. Her plan? To continue to confound the Borgia family, meaning that she’ll be staying in Rome for the time being.

After the reception, Lucrezia and Alfonso traipse up to their room where they begin kissing and undressing, only for Alfonso to spy the altered seating arrangement. Upset at this being the way her family thinks of him, he storms out of the room, leaving Lucrezia alone. She then takes her hair down, her shoes off, and changes into her nightgown before going to find…

Cesare. She takes her gown off and puts his hands on her breasts, claiming that only a Borgia can love another Borgia and that they shouldn’t deny themselves the pleasure, not when all of Italy talks about them possibly already being together. Lucrezia tells him that he will be her husband tonight and the two make love for the first time.

Additional thoughts and observations:
-As much as I liked this episode, why didn’t they address how Cesare and Alexander dealt with the body of Cardinal Orsini? I don’t need The Borgias to be Dexter or anything, but that’s a pretty big plot hole. They had someone in Catherina Sforza’s camp mention the death of Cardinal Orsini and the episode itself had only a minor time jump, so it felt strange not to at least allude to what happened.
-The only other (minor) quibble I have about “Siblings” is the Duke of Aquitaine’s usage of “two sack woman”, in reference to Louis XII’s wife. Either that’s a rather glaring anachronism or I’m not up on my 15th century insults.
-So, that last scene? I might have screamed a bit. Loved the camera work and the fake out that made you think she would be with Alfonso.
-Even though I think King Ferdinand is a punk his monologue about Alfonso playing his part in the game was quite well done. As much as the romance of The Borgias brings you in, the political/power moves are the things that stick with me the most. I love a good bit of strategy at work, especially seeing the other side plot against the papacy as Ferdinand does.
-Catherina telling Cesare he could sink his steel into her, up to the hilt, is the type of thing that makes me giggle. When he threw her up against the wall, though, I half-thought he was going to take her, no matter the fact that they were in public.
-Where do you think Cardinal Versucci went? The only clue that I saw, if you could even count it as a clue, were two nuns walking on the road near him. Perhaps he’ll be taking refuge near a convent? He won’t be able to stay too close, however, considering the manhunt that will commence once his theft is found out.
-Next week on The Borgias: Cardinal Farnese discovers Versucci’s theft, while Alexander calls for a Crusade,  Giulia sets up the Cardinals for a dramatic fall, and King Ferdinand publicly humiliates Lucrezia due to finding out about her marriage to Alfonso not being consummated.