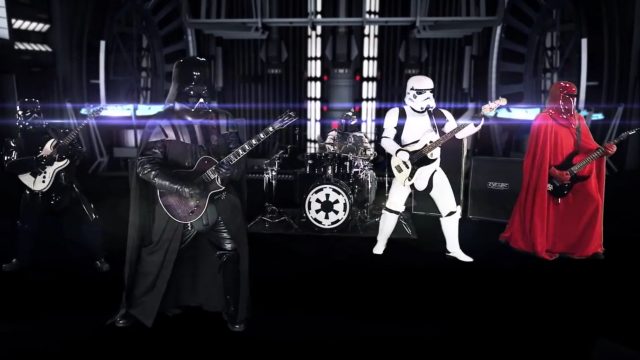 This past December, Star Wars fans around the world got a the perfect Christmas present in the form of The Force Awakens, the highly anticipated seventh film in the iconic franchise which, for many, surpassed their highest expectations. In the months leading up to The Force Awakens, everyone’s excitement was immeasurable, as fans across the globe participated in special events and movie marathons to prepare for the new film’s premiere. However, one group in particular took it to an entirely new level, combining their passion for Star Wars and their musical skills to create the metal band known as Galactic Empire.

Galactic Empire burst onto the scene back on Dec. 17, the same day as The Force Awakens hit theaters, with their excellent cover of Star Wars‘ main title theme. In the video, band members Chris Kelly, Grant McFarland, Carson Slovak, CJ Masciantonio, and Josh Willis dressed in costumes that looked like they were straight from the Star Wars movies and gave themselves fun names, such as “Dark Vader” and “Boba Sett.”

Galactic Empire’s metal version of the Star Wars‘ main title theme was an incredible success for the band. Their music video has been watched by over eight million people, and it even led to them performing live on television during E!’s coverage of this year’s Oscars.

Since that first wave of success, Galactic Empire has released an all-new cover of “The Imperial March.” The video, which was appropriately released on May 4 (aka Star Wars Day), is another impressive (most impressive) musical achievement, and while it features all five main members of the band, it also has cameos from Chewbaccca and the Emperor with them referencing moments from both Empire Strikes Back and Return of the Jedi, proving yet again just how big of fans these musicians in Galactic Empire are.

However, while Galactic Empire plans to continue releasing outstanding Star Wars covers, with a full album set for release later this summer, the band wants to do more than that. The members of the metal group are constantly being asked about when they’ll be able to put on a live show, and right now, that’s their main mission, which is why they’ve set up a Kickstarter page where fans can donate and help make their live-performance dreams a reality. Galactic Empire has raised a little over $16,000 so far, with their goal being $60,000, and the band is offering some pretty spectacular packages for those who donate, which include everything from free CDs to signed guitars to getting Force-choked live on stage during a show.

As we Star Wars fans patiently wait for Rogue One to hit theaters this December (only six more months, guys!), you may feel a slight disturbance in The Force, a little bit of a Star Wars absence in your heart. However, if Galactic Empire’s first two singles are any indication, their full album (and hopefully live tour) should certainly help fill it.