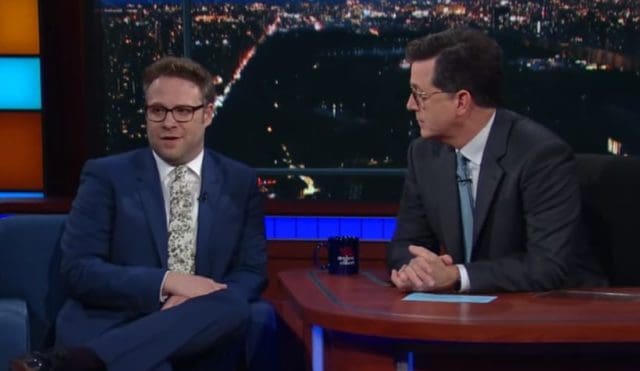 Admittedly this would be a lot cooler if the trolling on Twitter involved the President of the United States, but having his son getting picked on by Seth Rogen and Stephen Colbert is nearly as good.Â  Here’s the thing about Twitter for all you lay people out there.Â  One of the nicer features of Twitter is that if someone is following you on the social media site, you have the ability to direct message them so that they and only they can see the message.Â  If said person is not following you, you are unable to do this.

One thing that Seth Rogen and Stephen Colbert have in common is a follower that’s related to the President:Â  Donald Trump Jr.Â  My guess is that at this point Jr. just wants to keep tabs on these guys for some kind of revenge or something because it’s quite evident that Rogen and Colbert aren’t exactly Trump Jr.’s biggest fans.

In fact when Rogen was a guest on The Late Show last night the two decided to have a little fun with the President’s son.Â  Check out the entire clip below: