Growing up, I was a huge reader. I absolutely devoured books left and right, and I’d like to credit that early love of reading for helping to shape me into the person that I am today. While I loved most books that I read, two series in particular left the biggest mark on me. The first was J.K. Rowling’s Harry Potter franchise, which I was able to see adapted in full on the big screen (you can read my thoughts on those eight films here). The second, if you can’t tell, was Lemony Snicket’s (the pseudonym of author Daniel Handler) A Series of Unfortunate Events. Back in the early 2000s, a film adaptation of the first three books in the thirteen book series was released, and, while it made plenty of money, opinions of the film were very mixed (for the record, I thought it was a fine retelling of the story that was brought up an extra notch by the fantastic cast). For one reason or another, though, this film never kicked off the theatrical franchise that everyone expected it to, and fans of the series were left in the dark on its future.

Last year, we found out that Netflix had ordered a television adaptation of the series, and that adaptation is finally here. The first season of the series covers the first four A Series of Unfortunate Events books (The Bad Beginning, The Reptile Room, The Wind Window, and The Miserable Mill) through two episodes each. Early response has been so positive that a second season covering books five through nine has already been commissioned, and a third season wrapping up the series is expected to follow. As someone who has wanted to see a complete adaptation of this franchise for a very long time, I absolutely can’t wait to see how the streaming service handles it.

With all that out of the way, let’s take a look at the first two episodes of Netflix’s A Series of Unfortunate Events, “The Bad Beginning” Parts One and Two.

After a wonderful opening credits sequence (featuring the voice of series star Neil Patrick Harris), we’re introduced, similarly to the books, to author Lemony Snicket (played here by Patrick Warburton). For those unfamiliar with the story of the series, Snicket (and his siblings) plays a very active role in the actual narrative in addition to being the narrator for the story. Snicket introduces us to the protagonists of the series, the three Baudelaire children. Violet (Malina Weissman), the oldest, is an inventor. The middlest, Klaus (Louis Hynes), is an avid reader. The youngest, Sunny (Presley Smith with the voice of Tara Strong), is a baby with the gift of very sharp teeth with which to bite things. Each of the three children use their talents together to solve any problem that comes their way, but their world is changed completely when their parents die in a house fire at the Baudelaire mansion. The children are put in the guardianship of the family banker, Mr. Poe (played incredibly by K. Todd Freeman), who is charged with finding a guardian for the children. Unfortunately for the Baudelaires, this means being placed in the care of Count Olaf (Neil Patrick Harris). What follows in “The Bad Beginning” truly is a series of unfortunate events indeed. 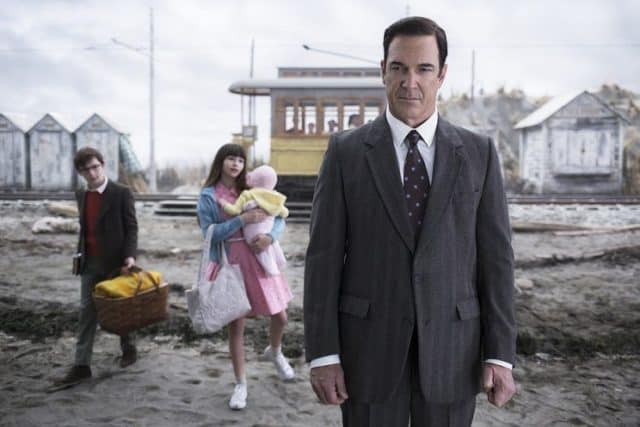 It’s hard to decide what the best thing about A Series of Unfortunate Events because the series works perfectly on so many levels. The thing that caught my eye first, though, was the design and style of the show. Aesthetically, I’m reminded a lot of Bryan Fuller’s television series (particularly Pushing Daisies), and the series does a wonderful job with this dark fantasy appearance. Just like the books, the series feels very out-of-time in that it doesn’t completely fit in any point in real history. So much of the substance and the technology calls back to the 1920s, but, every once in a while, you’ll get the hint that it’s a much more modern story than anticipated (it’s reminiscent of Tim Burton’s Batman in this way). Without a doubt, though, A Series of Unfortunate Events takes place in its own unique world that is quite unlike anything else on television.

Without a doubt, though, the strongest aspect of the series is the cast. While the children do as well as you could want (I particularly liked Weissman’s line delivery as Violet), it’s impossible to deny that the star of the show is Neil Patrick Harris as Count Olaf. Harris is clearly having the time of his life with this role, and it’s more and more obvious with every scene that he’s in. He absolutely chews up the scenery of “The Bad Beginning,” and Harris completely makes the case for why he was chosen. Jim Carrey is often considered the best part of the film adaptation, but Harris becomes the new standard for Olaf in only two episodes. We don’t really get to see it in “The Bad Beginning,” but the nature of Olaf’s life and acting “prowess” will allow for Harris to give a wide variety of performances through the series, and that’s something that I can’t wait to see more of.

Aside from the aesthetic alone, I want to mention how great the set design of Olaf’s house is specifically. It’s more important in a children’s show (which A Series of Unfortunate Events is, essentially) that the setting matches the story than it is elsewhere, and “The Bad Beginning” sets a great standard in this aspect for the series moving forward.

I would be remiss if I didn’t mention the changes that the series is implementing vis a vis the overall narrative arc of the series. In the books, the story truly kicks off once the exploration of VFD, a secret organization present in all aspects of the Baudelaire’s lives, begins in the fifth book. While the first four books were retroactively revealed to include VFD to a lesser extent than what followed, it’s obvious that Daniel Handler is introducing the mystery much earlier and much more directly than he did in the books. In my opinion, it works much better this way and should allow for more intrigue for both old fans and new ones alike.

In addition to more of VFD, the series is already doing a great job at fleshing out the story even more. The best example of this in “The Bad Beginning” is the flashback at the beginning of Part Two that helps explain how Count Olaf managed to manipulate Mr. Poe into putting the Baudelaire under his care (while, again, adding more layers to the VFD mystery). Things like this won’t be noticeable to viewers that haven’t read the series because they’re working so very well, and that’s exactly the way that it should be. Nothing (so far) feels out-of-place, and it’s a testament to the care that’s gone into the series that that is the case.

I had incredibly high standards for A Series of Unfortunate Events going in, but, if “The Bad Beginning” is any indication, the Netflix series has surpassed each of them. It’s rare to find a children’s series that doesn’t talk down to adults while also not going over the head of kids, but this is a perfect example of one that gets everything right.

What did you think of “The Bad Beginning?” Is A Series of Unfortunate Events proving to be the adaptation that you wanted? Let us know your thoughts in the comments down below!

Netflix’s adaptation of A Series of Unfortunate Events gets off to a perfect start with its two-episode retelling of “The Bad Beginning.” 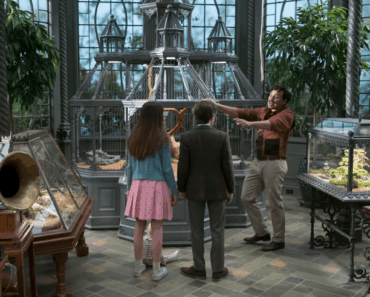 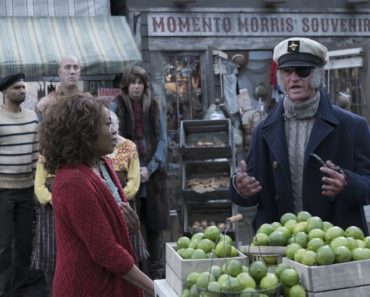