Home
Television
Between
Between Season 1 Episode 2 Review: “Who’s the Boss?” 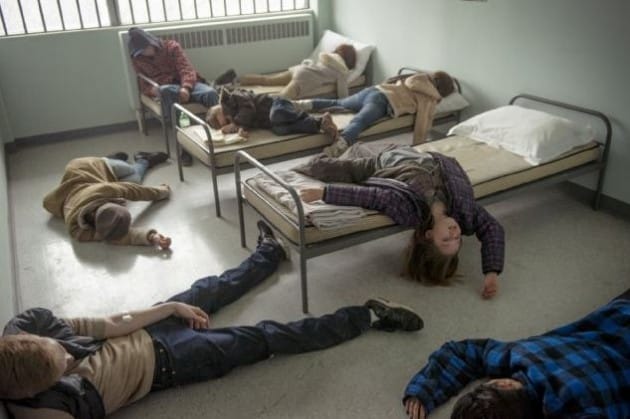 The first episode of the City TV/Netflix co-production Between established a solid premise with an equally great aesthetic, but the show’s cast was its major weakness (aside from the always wonderful Jennette McCurdy). There was enough good to justify more, though, so let’s take a look at “Who’s the Boss?”

Four days after the events of the premiere, Adam continues trying to figure out what’s going on in Pretty Lake and how he can get out of there. Meanwhile, the town continues trying to adjust to a world with a quickly declining adult population, but things aren’t going very well at all. By the end of the day, all citizens of the town over the age of 22 have been completely wiped out, and the population is ordered to burn all of the bodies so that the fences can potentially be taken down.

A major obstacle that the townspeople are having to deal with is trying to figure out who’s in charge and how to run the town. Multiple characters attempt to do what they can to keep things functioning, but there are challenges at every corner. One character that’s begun to really grow in a great way is Gord. It’s clear that the show is turning him into a moral compass for our leads, and it’s a role that he fits extremely well. Melissa, meanwhile, has taken on the role of town mother, opening up a makeshift orphanage for Pretty Lake’s orphaned children. There are just way too many children put in her care, though, and she faces the challenge of not being able to do all that she feels she needs to.

When she gets the chance, Wiley attempts to figure out how to get out of the deal with her baby that she had set in motion before the epidemic. Unfortunately, though, she passes out before she gets the chance. Meanwhile, a murder victim is found by Gord, Adam, and Chuck, and they begin an investigation into what could have possibly taken place. Things continue to get worse and worse for the town of Pretty Lake, and communication to the outside world becomes harder than ever. In the end, the town gets all of the bodies burned (in a surprisingly powerful scene), but not before Adam uncovers a connection between some people of power that was previously unknown.

One really interesting thing to me about the premise of the show is that it gives such a solid reason to have a predominantly young cast. While it is a shock seeing so few adults around, the justification allows you to simply enjoy the originality. The storylines in Between are beginning to merge, and the cast appears to be, slowly, coming into its own. The writing in “Who’s the Boss?” is very improved from that of the show’s premiere, and the score and set design are just as perfect as they have been since the beginning. One other huge positive that Between has working for it is the cinematography. The show’s camera work matches that of other Netflix originals exactly, and it helps you understand that you’re not watching some basic network drama. All in all, Between is a really interesting piece of science fiction that manages to blend in elements of other genres to to create something that really stands out in the television landscape of today.

What did you think of the second episode of Between? Do you want to see more Netflix co-productions in the future? Let us know below!