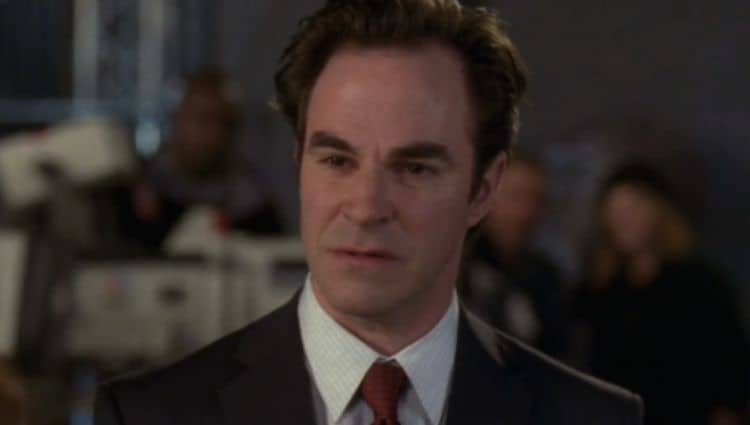 Roger Bart is one of those prolific actors who are never productive enough for us. Likewise, he’s highly lauded, but nowhere near often enough for our taste. Nearly everything he’s ever been in has been delightful and better because he was a part of it. In short, we can’t say enough good things about him. You know his face even if you don’t always recall his name because he’s been in about thirty movies from all different genres, plus almost fifty shows and an additional fourteen Broadway productions. Wherever you know him from, that’s not the whole story. Here are ten things you didn’t know about Roger Bart.

While Roger has done countless interviews, perhaps the most famous is Ilana Levine’s Little Known Facts interview, which she turned into an audiobook. There’s nothing quite as charming as learning even more about an actor when it brings new light and enjoyment to his (or her) body of work. If these facts aren’t enough, then never fear because there’s plenty more to learn about this fascinating performer.

Bibliophiles know that The Adventures of Huckleberry Finn is one of those, sometimes controversial, too often banned and burnt books. However, it’s also been more than one movie and a Broadway musical. Roger Bart debuted on Broadway in 1987 when he played the Tom Sawyer in Big River: The Adventures of Huckleberry Finn. The award-winning show was incredibly well-received, and though he didn’t personally win any awards for the role, Roger was a big part of why the show went so well. The show itself won sixteen awards and one more for the 2003 revival. It’s not a bad way to begin such a storied career.

In addition to his many Broadway roles, and voicing the singing parts of Scamp in Lady and the Tramp II: Scamp’s Adventure, Roger sang for Disney in another, even more, beloved classic. Every time you hear Hercules sing that is Roger Bart’s voice doing the work. He didn’t play the speaking parts, but never the less, adding ‘strongest man on earth’ to his repertoire is still a fair credit.

Among the more amusing roles Bart has taken, and there have been so many, he was cast in the upcoming musical adaptation of Back to the Future. It’s no small task to step into the shoes of Doctor Emmett Lathrop Brown, but if anyone could do it, certainly the ridiculously talented and brilliant Roger Bart can do the role justice. Christopher Lloyd, another beloved and entirely too talented actor, played the original and has been on set to see his theatrical descendant. The show doesn’t open until February of 2020 at the Manchester Opera House, for those who want to get their tickets early.

5. The Other Time Roger Played a Singing Dog

Roger Bart has never been cats in Cats, but he has played the role of a singing dog at least twice. Another of his incredible cartoon performances was playing the part of Snoopy in You’re a good man Charlie Brown, but there’s a twist to that tale since the show wasn’t a cartoon at all. Instead, it was the Broadway musical in 1999. That time he did win an award for his efforts. Bart picked up a well deserved Tony as the Best Featured Actor in a Musical.

With so much talent packed into one man, you might expect that Roger was like Kiefer Sutherland, a son from a famous theatrical family, but that’s not the case at all. No doubt, brains, and talent come from the Bart family. His uncle is Peter Benton Bart, the producer, and writer who was the Editor in Chief for Variety from 1989 to 2009 and a columnist for Deadline Hollywood for the last four years. However, Roger’s parents are a teacher and a chemical engineer from Norwalk, Connecticut.

Okay, that title is a little misleading, but Bart did introduce a friend, who later became a famous TV gangster, to the art of acting. James Gandolfini first became interested in acting when Roger brought him to an acting class. Though the credit for his skill goes entirely to James himself, it’s still noteworthy that James became a part of the acting world because Roger was a friend who wanted him to give it a shot. Perhaps in another life, Roger would have had a stellar career as a talent scout or a casting director. He certainly has an eye for talent.

” I do have a knack for making the absurd seem real,” Roger said to the Chicago Tribune in November of 2009. Though he hasn’t always played an oddball or a psychotic, Bart had undoubtedly done more than his share of outlandish roles over the years. He said it best himself. Roger has a talent for taking an almost unbelievable and improbable character and making you not only believe he’s real but love him, laugh at him, or fear him depending on the mood of the scene and the lines he’s given.

9. Private or Perhaps a Workaholic

You won’t find much in the way of personal details about Roger’s life. He keeps his personal life and his work separate. You don’t see his name in tabloids or mug shots, and he’s not involved in anything trendy or fleeting most of the time. He’s an icon in his own right. We’re not sure whether he’s just a man who likes his privacy, or if he’s a person with few secrets and an obsession with the thing he so excels at. Either way, we’re content to respect his space and admire his work.

While some people speculate about Roger’s Sexuality and whether he’s secretly married, we’re content to simply say that he’s dated women, and never been married. Anything beyond that is his own business, and he’ll share it, or not, as he sees fit. Bart has two daughters. Ali Kendall, daughter of Jennifer Kendall, is 32 or 33 now. In 2001 he became a dad for the second time. Eller Vereen, daughter of the now-deceased Shalyi Vereen, is 17 or 18.

If it’s not evident from our gushing, Roger Bart is one of our all-time favorites for the wacky and sometimes disturbing roles he’s played over the years. We can’t wait to see him in Back To The Future next year, and as always, we’ll be looking forward to whatever he does next. What’s your favorite role Roger ever played? Let us know in the comments.