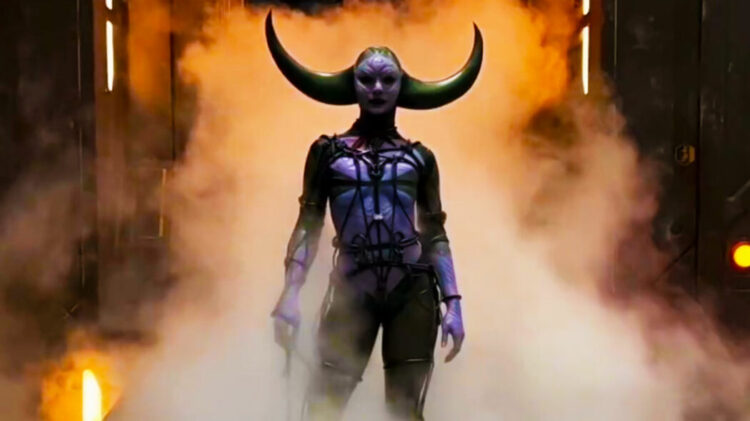 Should it be a concern that Rebel Moon is being likened in any way to Star Wars? Or is it just a coincidence that Zack Snyder, who might have wanted to do a Star Wars movie, is coming up with something that’s being likened to the fan-favorite franchise? It’s likely that there’s no reason to think that he’s going to copy too much from the franchise, or that he’ll copy anything at all, but from the few images that have already been released it does appear that things are going to be entertaining an edge that might hearken back to the 80s or 90s when it comes to the over the top type of villains and adventures that people remember. This simple image seen above is enough to think that the story might end up being something that will look awesome in a trailer but might be kind of awkward when one sits down to watch it. To be fair, Snyder does tell a convincing story and has managed to entertain quite a few people no matter how many folks might think that the Snyder Cut was too little too late.

In a sense, this feels like a version of The Magnificent 7 set in space, especially when reading the brief synopsis that’s been offered up. But perhaps there will be enough innovative and exciting elements that will make this movie stand out as something entirely original and capable of keeping people in their seats for more than an hour. It would be cynical to say that people are going to be entertained by anything they think is worth their time, but with this idea, it’s kind of warranted since looking at the pictures and the image of the villain it does feel like a serious mashup of a bunch of different elements that are meant to make people forget about other movies and focus only on this one. Seriously though, the movie already looks like something that’s going to be usable for cheap entertainment value and not much more.

Many people might stand in opposition to this idea since Zack Snyder is a name that a lot of fans trust and think can create something out of nothing, and an epic out of something great. But while the Snyder Cut of the Justice League was kind of interesting, it showed that Snyder might not be a great director, but he tends to tell a story that ends up lasting far longer than it should and takes forever to get to the point, at least sometimes. If this movie turns out to be the same way, it feels as though all the hype that’s been raised at this point might have been for nothing. It’s a bit early to think that the movie is going to be a flop or a success, but there are plenty of people that are leaning on every word that’s spoken about Rebel Moon and will either seek to defend it or speak against it at this point based on Snyder’s track record. That’s only natural to be certain, but from what’s been shown so far it feels likely that plenty of people are going to wait with great anticipation for whatever will come next.

Once the first trailer hits it feels as though a lot of people are going to change their minds while some will cling stubbornly to their opinions and their faith in Snyder. The fact that this is billed as an original story isn’t too hard to deal with, but it already feels as though, like always, originality is beginning to wane when it comes to Hollywood. Billing out stories that have familiar elements as original stories has become kind of tiresome at this point, but it’s going to keep happening since there are only so many different storylines, but infinite ways that they can be presented to the public. The fact that Snyder has been able to find success using such ideas isn’t hard to believe since he created something people enjoyed and folks have wanted him to keep doing it, which he’s obliged. Storytellers and directors tend to want to practice their craft as often as they can to get better, to please the fans, and to make their mark in cinema.

Rebel Moon is bound to be something that critics and many fans will see as another worthy offering by Snyder, and it’s not hard to believe that he’ll be praised for his vision once again. But if what we’re seeing at the moment is what the movie has to offer, it kind of feels as though Rebel Moon might be less epic and more basic. Hey, it’s a feeling, but at this moment it’s one that feels as though it’s warranted, and it’s bound to be an opinion that will be debated once the movie arrives.