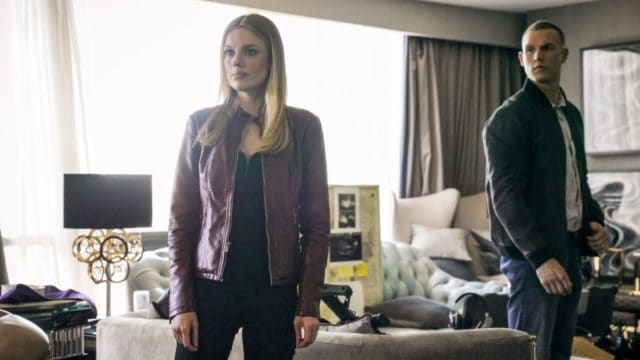 This week’s NCIS: Los Angeles reunites Anna and Callen for a personal case. More accurately, the case reunites Anna, Callen and Arkady. That man doesn’t seem to mind being in the middle of his daughter and her boyfriend. Anna was forced to handle the case in a particular way because of her personal ties to it, but Eric also showed how capable he was to be in the field. Despite Mosley’s reservations, Eric showed up to work.

Abram Sokolov has returned to the United States. I’d say people aren’t happy to see him, but that depends who you ask. Callen isn’t even sure he believes Arkady when he claims to have received a text message from Sokolov’s sister, which in and of itself is an unprecedented occurrence. But Arkady hasn’t steered Callen wrong yet, and considering Callen is dating his daughter, he has even more reason to be honest. Just the possibility of Sokolov being in town is bad. The last time he was in Los Angeles, NCIS broke up the money laundering scheme he was using to smuggle U.S. weapons to Ukraine. Since Sokolov’s sister helped NCIS, she’s on his hit list. Arkady is rightfully worried. Arkady also has reason to worry about who holds Sokolov’s sister’s fate in their hands.

The idea is that Sokolov is a creature of habit. He already went after his own sister, so it is natural to assume that he would go after Leah winters, the banker he was working with before. She also turned on him, but covered to make it look like she hadn’t. While Eric works to protect Leah, Sam, Callen, and Arkady try to track down Sokolov’s sister. What they don’t expect to find is Anna. Evidently, Anna and Callen have not seen a lot of each other lately. Callen didn’t even know where she was. They’re not going to make a big deal about it, since they both have busy jobs.

The person showing the most affection in this episode is Arkady. He seems to have genuine feelings for Sokolov’s sister. After Anna rescues her, Arkady insists on going to the hospital with the woman. But the ambulance is hijacked, and the only exchange Sokolov will discuss is Leah for Arkady. That exchange never happens, since it was to distract from activity at the bank Eric was guarding. Before Eric knows it, he has a lot of very angry Ukranians breathing down his neck with guns. NCIS gets there in time, but Eric still has to handle a gun. Eric was never the one to worry about, Anna was. Her relationship with Arkady might be complicated, but he’s her father. She had a chance to neutralize a threat against him, and she took it. If that meant ignoring protocol and shooting Sokolov when he was unarmed, well, Callen’s not going to turn her in. He has his own reasons, namely his father, for wanting Sokolov dead.

Does this threat end with Anna’s choice, or will there be personal and professional consequences for what Anna did?

Eric gets a chance to fly solo in this week’s NCIS: Los Angeles.