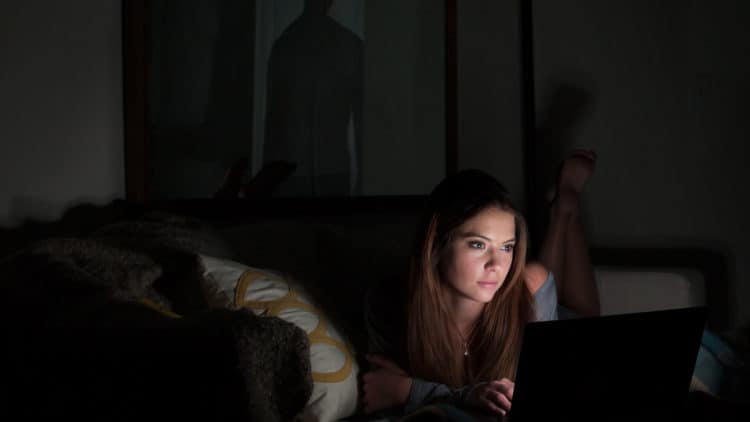 The found footage types of movies haven’t been firing on all cylinders over the years, and Ratter is another one of them that has been lost to the archives, probably for good reason. Let’s be fair and say this: the idea was sound and the paranoia that can be created by this type of movie is real enough since the fact is that just about every device we use these days, from phones to laptops to security cameras, etc., are hooked up to a network that some folks can dip into whenever they want. Ratter is the story of a young female graduate student that relocates to New York to further her studies, and is unfortunately set in the sights of an internet stalker that hacks into every online account she has, and begins to create a feeling of paranoia and terror in the young woman as she becomes increasingly unstable as the stalker eventually invades her apartment, with her in it no less, and continues to mess with her life in ways that would create more than a few different reactions in many people.

The realism behind this idea is so horrifying that it’s tough to simply shrug it off since plenty of people are scared as hell of being assaulted or even just watched in their own homes. From voyeurism to stalking, the privacy that people want is often something they don’t get because technology has advanced to a state in which no one is safe since a person can hack into just about anything so long as they know how to do it. People can access the cameras of a person’s PC, phone, or any other device if they have the know-how. It might sound like paranoia, but the truth is that any system that’s put in place is bound to be compromised at some point if only because there are plenty of people that have little to no moral center and feel that anything and everything is up for grabs.

Movies such as this make some of us pine for the simpler days when a good deadbolt was considered secure enough and people could feel safe in their own homes. Granted, home invasion is still a big issue that’s been around for a while, but in the technological age, a person doesn’t even have to be in the same space as the individual they’re attempting to terrorize, which is even worse, since it means that one’s privacy is up for grabs to anyone that has the type of skill that it takes to hack into their electronic devices. Not understanding the motivation behind such an act is every bit as bad since there was no real idea why the stalker was doing this, other than infatuation that might have been held for the woman being stalked. In terms of acting and overall story, this movie did feel a bit stiff, but in the interest of fairness one has to admit that it wasn’t a big-budget movie, and therefore there weren’t a lot of huge expectations to be had from it. One could safely say that it’s a movie that many people have probably forgotten about in the past several years.

The issue it highlights is creepier than the actual movie since there are already plenty of people that have experienced issues with stalkers, bullies, and others that feel the need, for some reason, to bother and terrorize those that they’re attracted to to to in one way or another. The idea of stalking anyone through their electronics is more than a little disturbing, not to mention demented, but this movie does manage to highlight the fact that it’s possible, even if a lot of folks might not know how such a thing might be possible. A movie such as this definitely makes a lot of people think twice about the many devices they use since the fact that just about anything can be hacked by someone with enough determination is enough to keep people from feeling too comfortable around technology. With that being said, it’s also easy to state that it wasn’t simple to trust anyone in this movie since the stalker was a bit possessive obviously, but it’s tough to think that the woman’s exes would have done something like this.

When all is said and done this movie is effective enough in getting the idea that cyberstalking is real across in a way that might terrify some folks, but could heighten the awareness of others. As a movie, it feels more like a prolonged PSA detailing the dangers of dealing with a cyberstalker, since the substance isn’t really there. As a found footage movie it feels a bit incomplete and could have possibly been given a different look and even a better script that might have been a little more engaging.