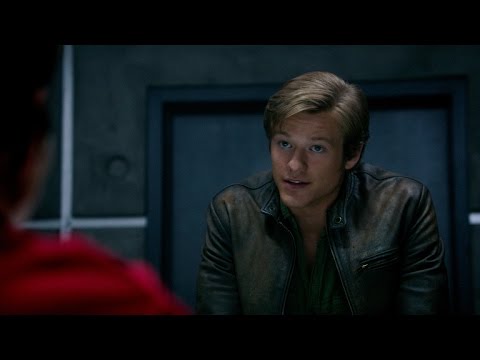 All in all the first season of the MacGyver reboot has been very successful. Once they smoothed out the Thornton storyline properly, the show found its footing with the already wonderful magic our modern day MacGyver has. Every addition to the team thereafter made the Phoenix Foundation feel like a home, to get them to the place of unity they are in now. It all started with Jack and Mac. We finally flash back to Jack and Mac’s first case together, or at least the first case where they bonded over not dying in the deserts of Cairo. Every year thereafter the two commemorate making it home from that mission with “Cairo Day”, where they take the day off and eat Egyptian food. It’s Jack’s one rule for a reason. Nothing good happens when they work on Cairo Day, and this time the trouble follows them home.

Mattie welcomes Dr. Milton Zito into the Phoenix Foundation, which is a name that should be recognizable to fans of the original series. This Dr. Zito is actually Jason Tennant (guest star Mark Sheppard), an enemy in disguise, which the Phoenix Foundation doesn’t realize before Bozer is stabbed. Hiss sole purpose for infiltrating the building was to release the anonymous man who worked for the Organization which tried to have MacGvyer killed. Murdoc said he would get his revenge for being captured. Once he realized he wouldn’t be able to do it himself, he gave a buddy in the cell over from his the right incentive to work for him. Things go from bad to worse when the Organization hacks Phoenix’s network, blinding Riley.

This means that the only way to break into the server room is by force. As it turns out, Jack was actually paying attention all those times that MacGyver was building bombs out of nothing. Jack, Riley, and MacGyver are forced to split up in order to take back the building, but in the process Riley is forced to take a man’s life. As if that wasn’t disturbing enough, MacGyver finds out why the letter he sent to his father never found its recipient. At least that’s what Tennant tries to make MacGyver believe. Everyone is left to fend for themselves, but ultimately it is Bozer and Mattie who save the day. As the only one who got a good look at Tennant’s face, Bozer is able to point him out to Mattie. Mattie has what I would call her ultimate Yoda meme/warrior moment when she literally takes Tennant out at the knees.

After everything is said and done, Bozer and Riley agree that they would rather the life they have than to live in ignorance. MacGyver and Jack choose to have an adventure looking for MacGyver’s dad. Maybe it will be a summer long adventure so that everyone can heal. Mattie can hold down the fort in the meantime, or so she thinks. She takes great pleasure in rubbing Murdoc’s failure in his face, but you know what they say about poking the bear. He’s going to swipe back, or in Murdoc’s case, kill anyone who gets in his way of escaping.

Just like that, Murdoc’s story is just getting started. Share your thoughts on MacGyver’s Season 1 finale, and the first season overall. See you for Season 2!

The cycle of vengeance between MacGyver and Murdoc kicks up in the first season finale.