Who cries for Frank?

That’s the one thought that I left “The Candidate” with. Despite all the heart-wrenching deaths of the episode, the one that hit me the most was Frank’s, which was the least heart-wrenching of all. It was done almost comedically, with Frank being hit by a heavy metal door and knocked out as the water rushed in from the breached hull of the submarine. Could Frank have survived? It’s possible, and I certainly hope so — but 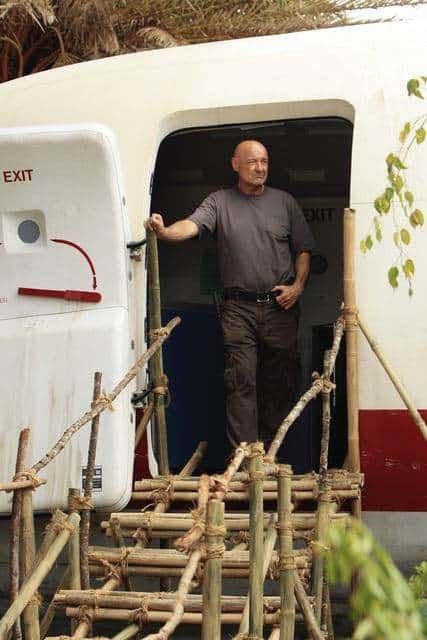 I doubt it. It seems that after all the deaths, though, that perhaps they could have given the original pilot of Oceanic 815 a little bit of honor with his final curtain, instead of the brief smack he received. Because, really, I didn’t think he was dead until the episode ended and I realized that they didn’t show Frank waking up and escaping. It was an anti-climactic end(?) to a fantastic character.

But if it was climactic deaths you wanted, all you had to do was look over at the three other characters, who died perhaps the best deaths they possibly could have. Sayid took a bomb and ran with it in an attempt to save the other survivors in another episode of “C-4 on the Water.” He at least managed to save some of his fellow submarine riders (and to tell Jack that “it’s you,”), but unfortunately was obliterated so completely that Jack would later scream to Hurley that “There is no Sayid!”

But the castaways that Sayid failed to save, in addition to Frank(?) (whose death I will refer to with a parenthetical question mark until confirmed otherwise), were Sun and Jin, whose too-good-to-be-true reunion in “The Last Recruit” was indeed too good to be true. The foreshadowing was evident in the cages scene, where the two discussed their off-Island daughter, Ji Yeon. Why else would they have shown that scene if they didn’t plan to give those characters the axe?

And they did, in one of the most heartbreaking scenes of the series, since at least Charlie’s death in season three’s finale. As the water rushed into the breached sub, Jack, Sawyer, and Jin all struggled to save Sun from a piece of debris that had her pinned to the wall. All their tugging was worthless, and Jack left with an unconscious Sawyer, while Jin and Sun stayed behind and drowned together, unwilling to leave each other’s side. As they died, their hands slipped apart in a way reminiscent of Juliet and Sawyer’s grip in “The Incident,” (except horizontal, of course). Excellent direction of this shot, unquestionably. But why did it have to be so damn sad? (Of course, I wouldn’t have it any other way).

There were some more deaths of the Widmore goons, who were just an annoyance in the episode and posed no real threat, not even when they shot Kate in the shoulder. After all, the real lurking threat was the Man in Black, who completely shot any moral ambiguity to absolute hell. After all, you can’t trick Jack into taking C-4 onto a submarine, killing 4(?) main characters and then expect to be loved for it. Even Claire is finally starting to get a clue that this guy isn’t all he’s cracked up to be, especially when he heads off to “finish what he started” with the survivors. That last shot of her standing on the docks had an interesting feeling to it. Claire hasn’t returned to main character status to sit around and look crazy. She has a purpose, and I think it’ll have something to do with taking down Man in Black.

Of course, she’s going to have to try a lot harder than Sawyer did. He’s been acting very stupidly throughout this season, especially in this episode, when he indirectly caused the deaths of Sun, Jin, Sayid, and Frank(?). Sure, Man in Black planted the bomb, but if Sawyer hadn’t been an idiot and pulled the wires, there would have been a little more time to properly dispose of the bomb instead of Sayid taking one for the team.

And what was up with Widmore? He’s abandoned any facade of niceness that he might have possessed before, and now he’s acting just as despicably as the Man in Black does. I’m pretty sure he’s going to get killed, and when he does, I will be happy.

The flash-sideways time-line has a very big danger of being the forgotten aspect of this episode, considering all that went down on (and just off the shore of) the Island. But it was still fairly important, as it revealed that Locke and Cooper were in a plane crash which left Cooper a vegetable and paralyzed Locke (which turned out for the best, I suppose), and the fact that Jack is starting to see how deeply connected he is with every member of Flight 815. Sure, nothing major other than Locke’s survival was revealed, but it was still an acceptable transition considering how much the Island story progressed.

All in all, I’ll give this episode an A. As much as it pains my heart to do so, it was a great episode with great and terrible deaths… and we obviously haven’t seen the last of Sun, Jin, Sayid, and Frank(?) — remember, every cloud as a silver lining, and every time-line has a flash-sideways.

See you again next week for the very interesting-looking episode fifteen.