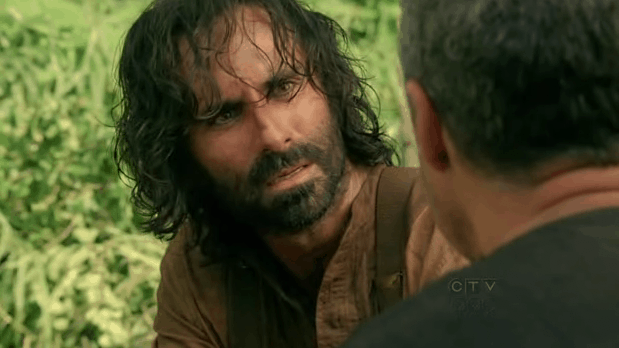 Richard Alpert recieved a starring role in tonight’s episode of LOST, titled “Ab Aeterno,” and I know I’m not the only one sighing that it’s about time. The Island’s mysterious ageless man has been on the show since the episode “Not in Portland,” way back in season three, and even then it was in Juliet’s off-Island flashbacks. We first saw him on the Island in “The Man from Tallahassee,” and we only learned he was ageless in Ben’s flashback from  “The Man Behind the Curtain.” In fact, despite all we’ve seen of Richard (twenty-five episodes), we’ve never known much about him outside from his role as an advisor to the leader of the Others. It was only in tonight’s episode that he received real motivation and became a real character.

Despite having a running time four minutes longer than other episodes, “Ab Aeterno” simply flew by, perhaps because there were long periods of not much happening. They were essential to the depiction of time passing, I know, but the long montage sequence of Richard stuck in the Black Rock was a big time-waster.

However, that’s my one complaint about an otherwise solid episode, which delivered more than its fair share of answers. Want to know how the Black Rock ended up so far inland? Want to know how the Statue of Taweret ended up being reduced to a foot? The writers cleverly knocked out two birds with one stone: the Black Rock toppled the statue as it rode a giant tsunami inland. You can mark two of the show’s questions off your list, as well as one more major one: why doesn’t Richard age?

We’ve known that Jacob gave him the gift, but why he gave him the gift was a completely different matter entirely. The answer? He wanted Richard to be his liason to the people he brought to the Island, since Richard is very non-interventionist. Of course, that wasn’t Richard’s first choice for his new job’s paycheck; it was his third. Having his deceased wife Isabella back was his first, while penitence for his sins was the other. Jacob admitted that he was incapable of either of those tasks, but eternal life for Richard? “That I can do.” Mark Pellegrino’s delivery of this line brought forth a chuckle, probably because there were tones of really dry humor in there.

Isabella’s death from some sort of sickness was depicted in the early flashbacks of the episode. Richard’s attempt to save her ended with the accidental death of a doctor. Richard was then put in prison, where he was told by a priest that there was no way for him to repent – he was going to be hanged and he was going straight to hell. Reassuring words, padre.

But the Padre did seem to look out for Richard, in that he sold him to a slaver working for captain Magnus Hanso, of the Black Rock. Richard then spent a while on a boat with several other prisoners, until that fateful storm that landed them on the Island (and also messed up that statue).

The aftermath was gory; the ship’s first mate, Whitfield, slew all of the slaves but Richard, who was spared when the black smoke came, killed Whitfield, and then gave Richard the scan that he had given Eko and Juliet earlier in the series. Then, obviously using Richard’s memories, who showed an image of Isabella being taken by the smoke monster. Richard, despairing, remained stuck in his bonds for a while. That is, until a man showed up. They had cleverly hidden his face so that we all thought it was Jacob, and then when it was revealed that he was Titus Welliver’s the Man in Black, it was quite shocking. After making a deal with Richard (that Richard would do whatever he said), then the Man in Black released Richard from his bonds. “It’s good to see you out of those chains,” he remarked, just like he would centuries later outside the statue after Jacob was finally dead.

What followed was a manipulation of Richard that was so transparent it was almost sad. Calling Jacob “the Devil,” (a name also attributed to the statue by Richard’s fellow slave) the Man in Black said that in order to get Isabella back from Jacob, he would have to kill him. After all, the only way to get out of hell is to “kill the devil.” Oh, and the Man in Black let it slip that he was the black smoke, whom Richard had presumed was the devil.

Then he issued his command: stab Jacob with a knife. The knife was, in fact, the same knife that Dogen gave to Sayid to kill the Man in Black with in “Sundown” (and with which Sayid later cut Lennon’s throat). It was also issued with similar commands (down to the “don’t let him speak” bit), although with different targets. This was another example of the wonderful parallelism in this episode, though it’s interesting to note that if Dogen’s instructions to Sayid were the same as the Man in Black’s to Richard, then is it possible that Dogen wasn’t just sending Sayid out on a suicide mission?

Of course, when he approaches the statue, Richard is soundly beaten by Jacob, who then convinces him that he is not in Hell, and that he is not the Devil. After everyone has calmed down, Richard then pours some wine and proceeds to give Richard the most relevant metaphor we’ve had since the magic box in season three — perhaps even more revelant than that.

Jacob compared the wine in the bottle to Hell, and the flask containg the wine to be a similar container for hell. But the cork which keeps the wine/Hell out is the Island. This makes the entire series seem much more prevalent, and makes the stakes universal instead of only character-based. But somehow, this major twist seems to fit in with everything.

In the main Island storyline, we receive two sort of pointless flashbacks from Ilana, which are basically Jacob giving her instructions while she’s in the Russian hospital we saw her in during “The Incident” (and later out of the hospital). Basically, he told her to protect the remaining six candidates and that Richard would know what to do after that.

Richard, of course, has no idea what Ilana is talking about when she recounts these instructions to him. Still believing that Jacob has lied to him his entire life (I thought we gotten past that during the dynamite scene in the Black Rock!), Richard stalks off into the jungle. As the survivors contemplated what to do, Jack spied Hurley speaking Spanish with a spirit. It’s nice to see Hurley finally utilize his ability to speak Spanish on the show. We’ve seen it briefly in interactions with his family, but never as pronounced (no pun intended) as it was during this episode.

In fact, Hurley follows Richard and tells him that Isabella’s spirit is still on the Island (which is odd, considering she died off the Island and her body isn’t on the Island either). Hurley then has a Ghost-esque moment with Richard, translating Isabella’s love to Richard. In a nice touch, Hurley doesn’t repeat everything we hear Isabella say — it’s assumed and it’s still fantastic.

Of course, all this happens after Richard calls out to the Man in Black that he wants to take him up on the deal. He thinks no one’s heard, but after Hurley tells Richard that “we all go to Hell” if MIB leaves the Island, we pan away to find MIB watching from afar, turning to the camera menacingly.

I thought this would be the end of the episode, but instead it utilized its longer running time to the max, showing us a quick Man in Black flashback in which he meets with Jacob on a hilltop. Jacob presents him with the gift of the wine bottle we saw as a metaphor earlier in the episode. As Jacob leaves, the Man in Black shatters the wine bottle. He knows about the metaphor, we realize. And he truly intends to unleash Hell on Earth. If there ever was an ambiguous moral line between Jacob and the Man in Black, I think we can safely say that the line is pretty much erased now.

“Ab Aeterno,” while not quite meeting the expectations that were set for it (most were expecting a HUGE mythology dump, but we only got a medium-sized one, with an emphasis on character development), was still one of the best episodes of the season so far. I’ll place it in second, behind “Dr. Linus” and right in front of “The Substitute.” You can expect a more detailed mid-season ranking of LOST later in the week. Until then, I give this episode an A+.