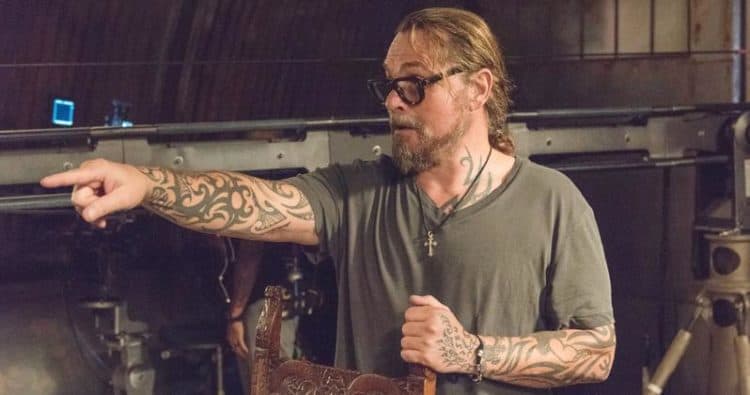 If this telling of The Beast by Kurt Sutter sounds familiar it should to those that have seen Brotherhood of the Wolf, a French movie that came out in 2001 and was actually quite interesting given that it was a bit of mystery as well as a martial arts exhibit as it starred Mark Dacascos, who’s best known for having starred on Iron Chef: America and in the latest John Wick movie. If anyone’s willing to doubt this then perform a quick Google search in order to verify the location and the time period that Sutter will be writing about, since the tale takes place in Gevaudan in the 1760s, the same information that’s being released concerning his directorial debut. It’s not much of a surprise really and it’s not scandalous to be fair, but it’s a hope that Sutter and Jason Blum, who will be working with him on this project, will have expected people to make that connection since it’s been a couple of decades, but the mere mention of the story should be enough for those that have seen the movie would make the jump.  Now it’s interesting to think about what might be coming from Sutter’s creativity and how he’ll tell the story. The only hope is that he won’t go stomping all over the 2001 version by trying to do the same thing since to be realistic, the version that exists is great in its own way, but it’s not exactly true to form since it’s not likely that the hunters that took off after the beast were martial artists, and in the documented story there’s no indigenous guide that was present during the hunt.

In short, Brotherhood of the Wolf was a fictional story based around a real tale that took place in France and started around 1764. The particulars of the story were kept for the most part since the beast, or beasts, did in fact go after many people, but it was never fully understood if there was one or more. But the first documented attack was one that was foiled by a few aggressive bulls that backed the beast away, leaving the lone witness with a tale to tell. How realistic the recounting was is up for grabs since despite being documented back in the day there are a lot of tall tales that made it into the books that in this day and age would be attributed to imagination and exaggeration since even sea beasts were said to be far more terrifying than they are today. As real as the beast was, any tale about it was likely to be deemed as either stark truth or fanciful tale depending on who was telling the story and how real it might have sounded. But it’s easy to wonder how Sutter will take this and in what direction he’s thinking of going since his depiction of motorcycle clubs has left a lot of people thinking that he’s good at telling a dramatic tale, but he might have missed out on a few things that didn’t really fit the culture. One can only hope that he’s not going to do the same with this story since like it or not, he could be offending more than a culture this time around, he could possibly insult an entire country that might see that story as something that isn’t so much a part of their pride, but is still something that needs to show France in a decent light.

There isn’t too much of a concern since one thing Sutter can do is tell a story, even if it’s not entirely accurate, and people have liked what he’s been responsible for in the past, so it’s not something that a lot of folks are going to worry too much about. But since the story of the beast has already been told at least once or twice and is probably something that plenty of people in France might know about, it’s going to be important to be at least somewhat accurate with it since like it or not, this type of story does need a bit of special attention to make sure it comes through the way it should. At the moment there’s no release date for this movie, but it’s likely that more information will be forthcoming when things really get underway. It’s going to be of greater interest once it’s really seen how Sutter is going to adapt this story and make it his own since if fans start to figure out the relation between this and the 2001 movie it’s likely that more will wonder if Sutter is going to do something similar or stick to the facts of the story, such as they might be. We’ll have to wait and see what’s going to happen and hope for the best.