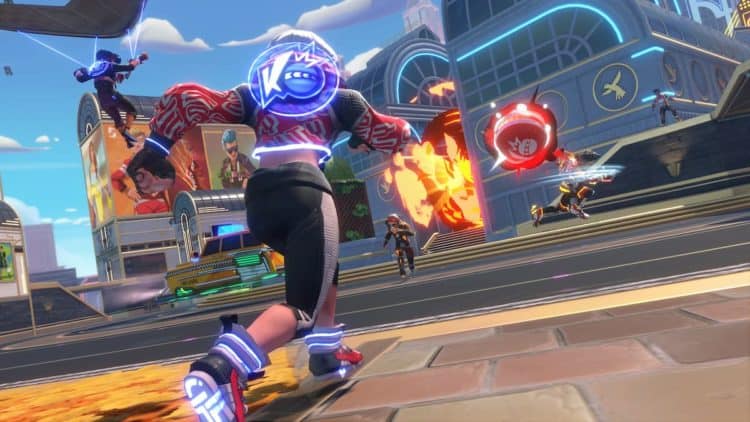 Knockout City is a little game that many gamers are overlooking. Given that pretty much everybody has their eye on AAA titles that could potentially be launching this season, this is understandable. However, Knockout City is a fun little romp that involves the childhood favorite activity, dodgeball. Developed by Velan Studios and published by Electronic Arts, Knockout City seems to be a nice little alternative to Fortnite and other battle royales that are flooding the market. What makes this game work so well is the fact that it is centered around the simplistic fun that many kids used to play during gym class on Fridays. Of course, this isn’t a Madden or MLB interpretation of what dodgeball is, this title is much more stylized.

The twist with this game’s release is that it is initially free-to-play. However, once the player reaches level 25, then the player has the option of buying the full game. It’s almost like an extended demo for players who are on the fence with this game. Of course, players can purchase the full game from the start of just $19.99. This seems to be a reasonable price given that the content is associated with the basic tendencies around dodgeball. This may seem like a shallow way to get some thrills, but this game is garnering some rather solid reviews. It comes with cartoony fun that is coupled with an arcadey aesthetic that is hard to beat.

Art Of The Bounce

Despite the charming demeanor that comes with Knockout City, this is a surprising level of depth to the gameplay. Naturally, the default attack is hurling a ball across the map while trying to hit the target. Beyond that, there are some nuances within the controls that players need to master. If timed correctly, players can throw balls around corners, catch incoming balls, and even fake out attacks. The physics in this game isn’t really realistic by any standards and that is what makes it fun. The avatars of the players can jump around the map like ninjas and even do somersaults to get extra footing. Matches come in either three or four-player matchups that come in a variety of different game modes.

The standard game mode is “Team KO.” This is basically a basic rendition of team deathmatch. The team with the most points wins. Other game modes are also available those spice things up considerably. “Ball-Up Brawl” is one game mode where players are required to throw each others teammates that were morphed into balls. It’s a wacky mode that reminds one of Metroid in a weird way. Thus, “Diamond Dash” is a tug-of-war variation to where players must collect diamonds that are dropped by knocked out opponents. All of the maps in this game are varied and they all offer environmental hazards to keep players on their toes. These areas are all zoned within a metropolis that is titularly called “Knockout City.”

Every map forces players to switch up their tactics in order to keep things running smoothly. Rooftop Rumble takes place on top of towering buildings that are riddled with pitfalls. Concussion Yard is a construction site that has wrecking balls swinging around wildly. Lastly, Galaxy Burger is a fast food-themed joint that is a giant circular puzzle constantly rotating. These are on a few of the maps that players will get to play, with a total of five maps currently available. To keep things interesting, there are also power-ups that players can utilize that can make rounds a spectacle.  The “Moon Ball” lets the player jump extra higher in the air while they are holding it. Plus, the “Bomb Ball” is a spherical explosive device that explodes on impact. These are basic things, but they do add a little pizazz to the gameplay. The avatars can even have the ability to glide across the air with hand gliders in a classic Fortnite fashion to cross the map in a pinch.

There is also a really hefty customization system in Knockout City. Players can dress their avatar any way they please that reflects their personality. Players can use an in-game currency called Holobucks that they can use to unlock a variety of cosmetic items in the Brawl Shop. The throwing mechanics in this game do have some strategic intertwined into it. The trick is that players must charge up their throws to enable the trajectory of the ball to become “uncatchable.” This requires some positioning and timing to pull off. Of course, a standard throw can be caught and launched back to the attacker. This can leave them wide open for a counter. There is a trade-off of how all of the attacks function in this game. On top of that, there are also some mild melee attacks that players can use to gain space between their opponents. These moves come in the form of uppercuts and shoulder bashes that can help gain an advantage in tight quarters. Currently, Knockout City is in Season 2 that is going to end on the 27th. Much like games like Apex Legends and PUBG, new content is slowly drip-feeding into the game. Heroes are available to play and new maps are being added on a fairly regular basis. There is a lot that goes into a game that is merely about dodgeball and it is winning players over.

Knockout City is one of those games that came out of nowhere and it made a small splash. However, with that splash is a ripple effect that is gaining attention. From what the reviews have stated, this game has tight gameplay and is a worthy addition to the slew of PVP titles out there. Even though this game was launched this past May, the player base is growing by the day. It is now currently available for the Nintendo Switch, PlayStation, Xbox, and PC. If a fan of PVP games somehow missed this title this past summer, then now is a good time to jump in and try it out.