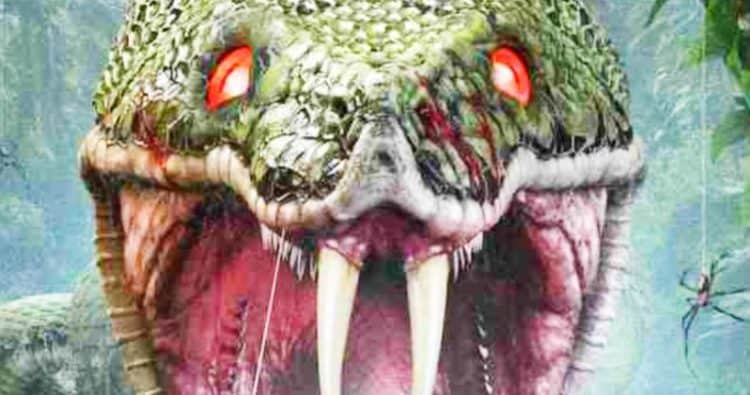 It’s not really certain if this is mocking Jungle Cruise, or shooting past it in an attempt to do something that’s been done before but not in a while. Did that make sense? It looks like a spoof movie that doesn’t know it’s a spoof movie so it does its best to be real while trying to move beyond being a spoof movie. Okay, that made it worse. It’s a ridiculous action movie that’s going over the top in order to sell a story that could have possibly been written in permanent marker on a whiteboard. An expedition goes missing, the daughter of one of the expedition members goes to find her father, takes a group with her, blah, blah, blah, and voila, jungle monsters that the world either forgot about or never knew about in the first place. It’s the kind of movie that one expects to see on the shelves before Jungle Cruise even hits Disney+ since the effects aren’t going to be completely bargain basement but they’re still going to look pretty bad since from the coiled snake that we see in the cave to the swarm of piranha, to the…whatever the heck the thing with a burning head is, this movie looks like a properly ridiculous action movie that shouldn’t get anyone’s hopes up and should simply deliver on what it’s displaying in the trailer.

If it sounds like I’m being a little caustic towards the movie don’t worry about it, the adventure does look interesting enough to check out, but if you’re hoping for a blockbuster then it might not be the right movie for you since quite honestly it does look a little silly and not like something that would be comparable to a movie that people might be psyched to see. It’s amazing the difference that marketing and a heft budget can make, but to be fair, a lot of people have actually enjoyed the lower-budget movies over the years for a number of reasons. One of them is that they don’t have to worry about big stars taking over and kind of dominating the movie.

A lot of times a low budget movie can be every bit as dependable as a big blockbuster, but there are those times when a person can’t help but laugh at the antics that are being carried out on the screen since quite often a low budget movie will find actors that have either been around for a while or are just starting out, but that’s typically for bargain-basement movies the likes of 5G Zombies and Murder Hornets. Lower budget movies can usually get people that have acting experience and might have been popular at one time. On top of that, the effects in lower-budget movies might not be the best, but they at least look decent enough to make it appear that the movie spent a good chunk of change on the CGI and practical effects. Coming up with fantastical jungle monsters and making it appear as though everything in the jungle is out to kill human beings isn’t too hard since it’s not too far from the truth. While a lot of animals might not be out to kill humans, they’re certainly not that welcoming and won’t thank a person for being there.

While I’m not bound to recommend this movie I definitely wouldn’t say stay away from it either since it could be entertaining. It might earn a few laughs from a lot of people but it’s possible that it would be enjoyable enough to watch with friends. One can imagine that it might even be fun to turn off the sound and try to make up your own dialogue since it could be a good time for all. No offense to the movie, but it does look like something that would give people a good laugh and a fun time all in one since on the serious scale it’s likely meant to be kind of scary and even thrilling but from the trailer it kind of just looks like something a person would watch when there’s nothing else on or if they have friends around and they want to have a little bit of fun.

Whether a person wants to take it seriously or not this movie does look like something that would be enjoyable to some and laughable to others, so in other words, a lot of people would enjoy it one way or another. As far as spoofing Jungle Cruise, yeah, probably not, but that does mean that it can be seen as its own unique thing, which is a lot better when a person thinks about it. It’s the kind of movie that would keep the truly gullible from ever going to a jungle, and get others to read up on the jungle before even thinking about it.