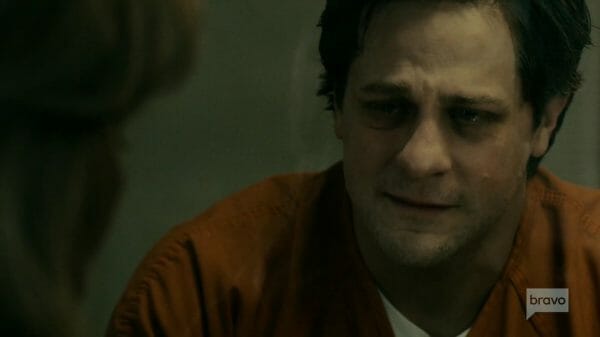 Joe Tippett has been working as an actor for more than 15 years. However, most of his experience has been in theater productions. Over the last several years, he’s gotten more involved with TV roles, and many viewers will be familiar with him from his role as Sam Strickland on the NBC series, Rise. Although the show lasted for just one season, Joe Tippett has continued to make guest appearances in other shows. Later this year, he will be back on the small screen with a main role in the upcoming HBO series, Mare of Easttown. There hasn’t been a lot of information released on the show so far, but there’s no doubt Joe Tippett is going to do his thing. Keep reading for 10 things you didn’t know about Joe Tippett.

1. He Is Dating Sara Bareilles

Joe has been dating singer/songwriter and actress, Sara Bareilles since 2017. Bareilles is best-known for her 2007 hit single, “Love Song”. The two met while they were both working on the Broadway musical Waitress.

Getting the opportunity to travel the world is something not everyone is lucky enough to experience. Fortunately for Joe Tippett, he’s had the chance to see lots of awesome places and he’s grateful for every moment of it. Joe has visited lots of places both domestic and abroad including Finland, the UK, and Paris.

What better way to commemorate travels than with lots of beautiful pictures? Not only does Joe love taking pictures, but he’s also really good at it. He definitely has a natural eye for capturing beautiful images. He often shares his photos on social media, and several of his followers have encouraged him to make prints.

4. He Was A Talented Athlete

Acting wasn’t always in the cards for Joe. He grew up playing sports and thought that was the path he was going to take. However, he wasn’t specific about exactly what what sport(s) he played. Joe said that he could have gone to college on a sports scholarship but ultimately decided to pursue acting instead.

5. He Stays Out Of The Spotlight When He Isn’t Working

Joe is a notoriously private person. When he does decide to conduct interviews or make public appearances, he always makes sure the focus on his work. His Instagram account doesn’t even have very many pictures of him. Most of the content he posts is the pictures he takes during his travels and other adventures. Even his relationship with Sara has largely been kept out of the spotlight.

Joe wasn’t the type of person who knew he wanted to act from a very early age. It wasn’t until his teenage years that he realized he wanted to consider acting. During an interview with Stage Buddy, Joe said, “I had an English teacher in high school who taught drama…and she turned me onto it.”

7. He Prefers Doing Theater In NYC

Theater has been a major part of Joe’s career, and he’s appeared on stages all over the country. However, he says New York City is his favorite place for theater. He says, “New York is home now, and that’s where I think the source of my theatrical pulse comes from. I’ve done shows and been hosted generously by cities all over the U.S. from Greensboro, NC; and Ames, IA; to Chicago and Los Angeles. On my bucket list is to do a show in London. But New York is home.”

8. He Doesn’t Think He Has The Voice For Musicals

Even though Joe is very confident in his acting abilities, he doesn’t feel the same way about his singing voice. Joe admits that he isn’t much of a singer. At one point, he only felt comfortable singing if there was whiskey involved, but now that his drinking days are over, the little bit of confidence he had is gone.

9. He Learned How To Play Tennis On YouTube To Prepare For A Role

In 2018, Joe starred in the play Our Very Own Carlin McCullough. His character, Carlin, was a tennis coach who was hired to work with a talented young player. Ironically, though, Joe, doesn’t know much about tennis. He told Broadway World, “I have never played a single match of tennis in my life. Roller hockey on a tennis court was the closest I ever came. I went on YouTube to learn tricks and how to spin a racket and so forth. Then, I basically just bullsh*t the rest.”

Despite not being the best singer, Joe loves to listen to music. One of his favorite groups is Hall & Oates. The legendary duo is best-known for songs such as “I Can’t Go for That (No Can Do),” “Rich Girl,” and “Private Eyes”.