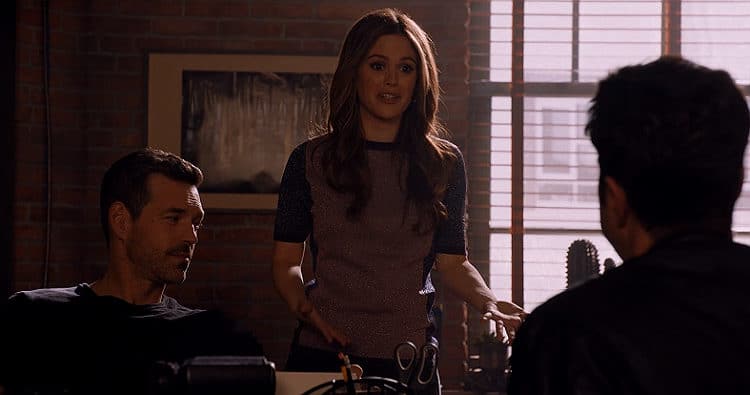 When I saw ABC’s Take Two trailer it reminded a bit of the film classic, Gigi. Take Two episode 2 definitely brought that feeling back.  This is the episode where P.I. Eddie Valetik (Eddie Cibrian) starts to see actress and P.I. wanna be Sam Swift (Rachel Bilson) has possibilities in his life beyond being an annoyance.  Of course, the only thing murdered in Gigi are people’s reputations. In Take Two episode 2 -“Smoking Gun” – the case of the week is an actual murder. Let’s start with that.

The case in “Smoking Gun” starts with an over-the-top voice-over by Sam while she and Eddie are sitting on a routine stakeout of a philandering man and his mistress. Eddie is trying to convince Sam that it’s boring work when shots ring out.

Eddie dashes out the car and up the stairs – with Sam trailing behind. They get to the bedroom, turn on the lights, and Brad Marsh – the man they’d been watching – is standing over the dead body of Daria – his mistress – with, yes. a smoking gun. The first thing this guy says is, “he didn’t do it.”

This being a light dramedy police procedural, we know he’s got to be telling the truth. Sam decides he must be because, as an actor, she can tell if someone is lying. (A skill that, judging by last week, apparently works with everyone except Eddie.)

Meanwhile, Eddie is talking to his detective friends-with-benefits pal. Detective Christine Rollins (Aliyah O’Brien) about the case – and about Sam.

In terms of Sam, he’s been taking her on the most boring cases he could find in order to discourage her from wanting to be more than just a face to meet the clients. Their attitude towards Sam is like the grownups talking about how to get a mischievous child to do what they want.

That’s when Christine notices Sam talking to Brad. She’s annoyed. Again though, her reaction is that of an adult in a restaurant telling parents they need to control their kid.

How They Get on the Case

Eddie is furious to learn that Sam’s told Brad that she and Eddie will take Brad’s case and swears they aren’t doing it. The tables turn when Sam ends up accusing the client of setting up Brad and revealing he’s been picked up on murder charges. This leads to Eddie losing his payment for the job. (Now, in real life, she’d have to pay up, but this is TV.)

Sam refuses to feel bad about this because Brad has lots of money and “will pay 10 times as much” for them to prove he’s innocent. Eddie points out that Brad is guilty. Rather than argue the point, Sam points out that if Brad did turn out to be guilty there’s “a certain justice in taking money from a guilty man. ”

From here on the case moves along nicely. As various clues are revealed it’s shown to us – and to Eddie – that Sam actually has some good instincts For instance, although Brad’s wife wasn’t the killer, she was cheating on Brad – which is what Sam suspected. (It makes the wife’s line, “once a cheater, always a cheater.” doubly true!)

It’s also Sam that guesses that Brad’s mistress wasn’t who she said she was – and asks M.E. Mick English (Jordan Gavaris) to run Daria’s fingerprints. Mick and Eddie are shocked that she’s right. Daria’s identification comes back as “Tina Florez” – a woman who’s been dead for eight years!

At that point, Eddie agrees to actually take the case. As more evidence turns up it turns out that the woman had a ton of aliases and had been blackmailing a lot of men…but not Brad. Hmmm…

One interesting addition is introduced in Take Two episode 2. Monica (Alice Lee). is a super smart psychology Ph.D. student living in Sam’s guest house rent-free in exchange for working as Sam’s assistant. Eddie’s assistant, Roberto ‘Berto’ Vasquez (Xavier de Guzman) finds her intimidating and awesome. Her being a body hacker contributes to both of those feelings!

Castle creators Andrew Marlowe and Terri Edda Miller liked to explore odd subcultures on that show. Having Monica be a cyborg definitely is a continuation of that tradition!

At the end of it all, (No, I’m giving you the actual case ending) Sam surmises that the Daria must have really loved Brad because she gave all her blackmail victims back the incriminating photos and said she was sorry. It makes Brad feel better about the relationship because he says he loved her.

Eddie and Sam: Is She Eddie’s Gigi 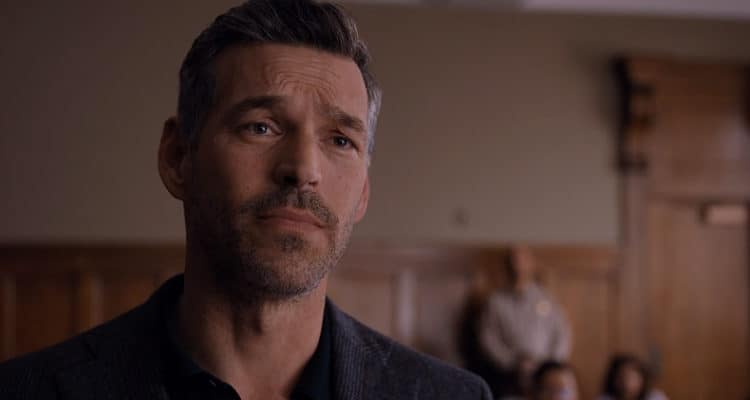 Of course, what’s really important for the shipper crowd is what’s going on with Sam and Eddie.  As such, I’m gonna have to address that closet scene.  …If the point of the scene was to suggest some kind of sexual tension between these to, it falls flat.  At best, Sam is aware that Eddie has a nice body. However, if it’s supposed to feel awkward and uncomfortable while making Sam appear a little vain and bratty, it works.  Given the way that “Smoking Gun” ends, there’s a case to be made for the latter.

Going back to the film Gigi, there’s a point where Gaston starts to see Gigi as a woman instead of a child. This episode seems to be moving Eddie in that direction. The closet scene, with all of its forced intimacy, puts into Eddie’s mind an idea that didn’t seem to occur to him in episode one.  He’s been made aware that this “kid” Sam thinks he’s attractive – and thinks she’s irresistible to him.  With that realization, the possibility of sex is on his radar in a way it hasn’t been before.

Between him vouching for her at the probation hearing, and how he looks at her while she’s assuring Brad that Daria did in fact care for him, we know his feelings have changed. Despite his general protests, and what he told Christine at the murder scene, he no longer really wants to get rid of her. It’s why at the end of the episode he decides not to go see Christine. Instead, he goes back to the office to celebrate with Sam, Berto, and Monica.

Like Gigi, Sam has quickly become endearing – in part because we know her background. She was an actress on a successful TV series, a recovering alcoholic, and had her heart broken by her ex-fiance. It’s easy to connect to a person trying to put their life back together. Bilson also lets an innate sweetness flow through Sam that works well for the character.

However, it’s through Eddie’s eyes that we get to see the way she cares about people. It’s this part of her personality that’s appealing to his jaded heart. In this episode, we learn a little bit more about why he’s always for negative point of view.

In the Take Two pilot, we’re told that someone died and he believes it’s his fault. It’s the reason that he stopped taking the big cases.  Now we’ve learned that he was stabbed in the back by the appropriately named Max Duchemin (Ben Wilkinson) – pronounced “douche-man.” Max is a P.I. that Eddie trained and then struck out on his own. Now he has a big agency.

There clearly was something shady about what happened. Eddie takes Sam to a bar to meet his pal, Zeus (Lamont Thompson). Zeus is Eddie’s friend from his days “with the force” – but now he owns a bar and a high-end security company. As soon as Eddie tells Zeus he needs help breaking into Duchemin’s office, Zeus is all in.

The Wrapup: Take Two is Fun, but More Needs to be Revealed

If Sam’s going to do a disguise every episode – I’m cool with that. It’s like a spoof of Alias. It’s even funnier that it never completely works and Sam ends up having to do mild physical harm to someone in order to escape.

I’m also loving the tongue-in-cheek names this show is doing! Sam Swift, Mick English, and now we have Max Duchemin and Zeus! These are right up there with Nikki Heat! Come to think of it, Nikki has a sparring-partner-with-benefits in the novels. That relationship is pretty similar to Eddie and Christine’s.

It could be that Take Two has more in common with the Nikki Heat novels than with Castle. In the novels, the characters’ names are a wink and nod to the reader. They let us know not to take things too seriously. The same can be said for the characters in Take Two. In that sense Take Two may more like the TV show Psych than Castle.

What’s Needs to be Revealed

Despite the things that are working, there are some things that are still needed to really make the show work.  On Castle, both Kate Beckett (Stana Katic) and Richard Castle (Nathan Fillion) were given strong backstories in episode one that made you care about them and see why they needed each other.  Thus far, only Sam’s past has given a real shape.  Take Two episode 2 has given us some more information on Eddie, but it’s not enough to really pull me into his character.

Hopefully, a stronger backstory for Eddie will emerge soon. Otherwise, the possibility of romance won’t gain any real heat.  These vague hints about his past aren’t enough to justify sharp cynicism, nor his pull to the youthful idealism of Sam.

The show also is going to need something that shifts the kind of father-daughter feel the two have together. I’m not sure what that is though.   These are not Gigi times,  a few lessons in etiquette don’t make you a grown-up.  There’s more to becoming a mature woman suitable for dating than learning to walk across a room, wear a tight dress, and chose a good cigar for a man.

While Take Two clearly is aiming to be light-hearted, maybe there needs to be a bit more seriousness in some of the interactions between Sam and Eddie? Let’s hear your thoughts about this in the comments. Maybe some of you are seeing it differently?