Home
How to Make It in America 1.01 “Pilot” Review 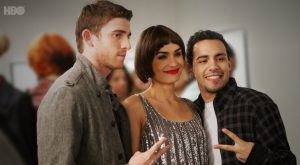 Why is that? The answer’s doesn’t lie with the characters; while they’re memorable, they’re all a little too stereotypical and underdeveloped, which is normal for a first episode. The answer lies in the fact that, unlike Entourage, the show itself seems to be winking at the audience. While watching it, I often thought of Arrested Development, especially in the jump-cuts to inanimate objects that made AD so memorable. For example, in How to Make It in America, the character Cam learns that his gangster cousin Rene (Luis Guzman, that very recognizable face) has returned. As he reels in shock, the camera suddenly cuts to Rene’s mugshots, and then cuts back into the scene seconds later.

The show centers around Ben Epstein and his friend Cam Calderon, two nobodies living in New York. Ben’s still pining for his ex-girlfriend, Rachel, and Cam has all kinds of harebrained schemes that he never seems to follow through with. Bryan Greenberg (October Road) and Victor Razuk (Lords of Dogtown) are solid as the two main roles, but don’t quite prove themselves as memorable. Kid Cudi makes a brief appearance as Ben and Cam’s friend Domingo, but even this short appearance doesn’t garner much memory. In fact, the only memorable performance is the naive David Kaplan, played by Eddie Kaye Thomas. His awkward acting makes him memorably funny, and he’s easily the best character on the show.

Instead, the show’s weight rests on the shoulders of the storytelling, which is actually quite strong, and the editing, which throws in the wonderful jump-cuts with the rest of the story.

Will I watch How to Make It in America next week? Probably. It’s off to a good start, though it will need quite a bit of character development to make anything particularly memorable or lasting. For now, the show gets a B-.