Home
Movies
He Was In That? Dean Norris was in 1990s Total Recall 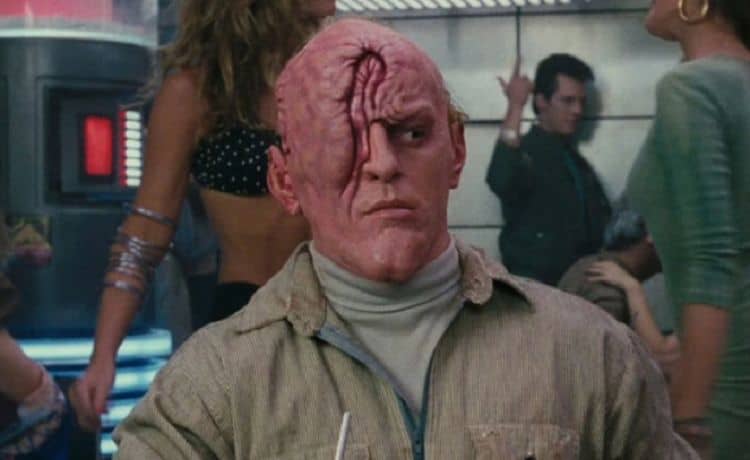 Makeup and wardrobe can do some amazing things since there are times when you really can’t remember who it is that’s under that getup and yet there are times when it’s someone that you probably should have recognized since they have such a familiar face. Back in the day though, Dean Norris might have been someone you could pick out of a crowd, but he still didn’t have the kind of fanbase that he’s amassed in recent years thanks to shows such as Breaking Bad and the many years he’s spent in the business. Dean has definitely made a name for himself over the years since he hasn’t always been front and center but he’s always been a reliable addition to a cast that helps to make it pretty solid. If you remember the original Total Recall movie with Arnold Schwarzenegger, and most do since the remake wasn’t so horrible that it can’t be watched but it definitely pales next to the original, you might remember the mutant Tony whose face looked like a half-finished calzone. The guy obviously didn’t like Quaide for his own reasons, even if the audience didn’t know yet that the character was supposed to be an undercover agent for the bad guys. Tony was just another rough and tough kind of guy that did have more to him than others in the town since was a part of the resistance that was trying to keep Cohaagen from taking over Mars completely.

But it’s still funny to think that a lot of people might not remember that Dea played this role. Admittedly it is hard to tell that it’s him under all that makeup and the prosthetic that’s being used, but his voice and his mannerisms are pretty easy to point out since the guy does have a very distinct voice and at this point in his career it should be easy to pick him out of a crowd since he’s taken on so many roles that he’s become a rather popular celebrity. One could argue that his celebrity status didn’t really hit an all-time high until he played the role of Hank on Breaking Bad, but he’s been around so long that it does feel as though people have seen him enough that he’s kind of a mainstay that’s fun to see every now and then since he can be a tough guy, which he usually is, or he can be someone that’s dialed down just enough to make it clear that he’s tough, but is also fair-handed and even-minded. After all, he has played authority figures that have had to show a little bit of reserve now and then, and he’s also had to switch up his acting style a couple of times just to make it clear that he’s versatile enough to step out of his comfort zone every once in a while.

Throughout the length of his career Dean has always been a pretty easy face to pick out, but there have been a few instances in which actors haven’t been recognized because of one getup or another. Some are fairly obvious once people get a look at them, while others are so hard to figure out that a person really needs to read the credits and then go back and try to figure out if there’s any way to discern the actor’s identity beneath the disguise. The one used in Total Recall isn’t the most concealing but it’s definitely good enough to the point that a lot of people weren’t fully aware that this was Dean Morris. One has to remember that his career was in full swing at this point, but at the same time he was still a great deal younger, so recognizing him from the movies he’d starred in might not have been that easy since he’d been more of an extra or supporting character at that point. Trying to pick him out of anything he’s done at this point would be easy since people know him quite well now and wouldn’t be that confused as to who it might be under the disguise. But with Total Recall it was kind of difficult to tell who anyone was if they were made up as a mutant since the effects were pretty well done.

Dean Norris doesn’t usually hide his acting in any way so if there’s any confusion as to which part he’s playing it’s usually found that it’s because of the outfit or getup he has to wear during filming. Total Recall is actually one of the only movies that this has happened in regarding Dean, but it was definitely one that confused a lot of people since quite a few fans had no idea who played the part of Tony until it was revealed. It’d be fun to realize how many people didn’t know the same guy that played Hank in Breaking Bad was also in this movie.