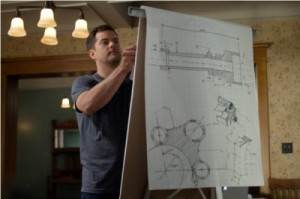 Let me be honest here: Fringe‘s fourth season hasn’t been as consistently great as the third season. While some of that could be blamed on the show’s noticeably lower budget, the majority of the problem is that there isn’t a real direction to the season. Sure, the slow build to Peter’s return over the first four episodes of the season was great, but once Peter returned the show seemed to slow down, as if to ask itself, “What next?” While he did have a fairly large role in last week’s “And Those We Left Behind,” Peter appeared for a total of three scenes in this week’s midseason finale, “Wallflower.” It’s quite baffling to me why the writers of the show made Peter’s return such a central part of the season, then failed to really expand upon it once he did come back. There’s promise of more Peter action once the show returns in January, but the momentum’s already been lost. Instead of another case-driven episode as the midseason finale, Fringe should have taken us to winter break with a more mythology-driven episode. Having Nina semi-predictably be revealed to be double-crossing Olivia simply wasn’t a solid enough ending to take us into the break.

But while I could be happier about the season’s pacing, there’s no doubt that the writers haven’t lost their knack for brilliant character-driven episodes. The center of the episode was, interestingly, Lincoln Lee, who struggled to be seen by Olivia in a similar way (metaphorically) to how Eugene struggled to be seen by the girl in the elevator. Peter’s good-natured assistance of Lincoln in his goal makes it seem like this isn’t really a love triangle at all — but I’m pretty sure that Fringe will ensure that Peter and Lincoln will eventually compete in some way for Olivia’s affections.

The case of the week was a little difficult to follow but was ultimately poignant, with the invisible Eugene struggling to be seen by the girl in the elevator before eventually being noticed — and dying soon after. His death scene was a wonderfully underplayed moment in the episode — a quietly tragic end for a quietly tragic life.

“Wallflower” was a great episode, though I’m not sure it was the best midseason finale. The twist featuring Nina at the end wasn’t necessarily strong enough to get the less fanatic viewers to tune in again, though it does open up some pretty interesting possibilities for the rest of the season. B

Fringe will return Friday, January 13, with the midseason premiere, “Back to Where You’ve Never Been.”