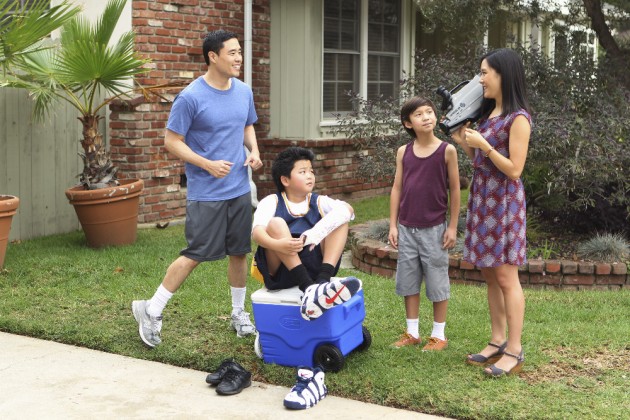 On a sitcom, morality plays about lying always play out in the same fashion: one lie turns into many, snowballing until the person initiating said lie can no longer control its effect (Breaking Bad also did this, but in a much… darker fashion, let’s say). So it’s no surprise where “Very Superstitious” begins, leads, and ends, which places the emphasis of the episode on the jokes and performances to carry a predictable story, Unsurprisingly, Fresh Off The Boat is more than up to the task on delivering both.

This episode, along with last week’s, have shown a slight shift in the ration of screen time between adults and children, with Fresh slowly starting to show faith in its younger actors to carry stories, if only for the sake of having consistent comedic devices around the parents’ more grounded (though thanks to the construction of their characters, still absurd) portrayal. “Very Superstitious” certainly reflects this in its latter two acts, splitting time between Eddie’s school election and Jessica’s paranoid relationship with the number four, which is not something made up for comedic purposes – many buildings in Hong Kong do not have a fourth floor, and companies in eastern Asia avoid naming their products with a four in the product or model name.

Of course, the more rewarding comedically of the two is Jessica’s story: her paranoia is co-opted by Louis after he watches a commercial filmed by his biggest competitor, cashing in her unlucky commission check to buy a mechanical bull (a very, very creepy one, I might add) for the restaurant for entertainment appeal. This paranoia isn’t just to paint Jessica as an insane harpy, however: it’s played for laughs, but as a byproduct of Jessica’s natural intensity, not any attempt by the script to ridicule the character’s beliefs. If anyone becomes the butt of jokes, it is Louis once again, whose aloof nature and ability to pull a conversation out of any random comment have made him such a likable straight man to Wu’s much more animated, in-your-face character, whose intensity is best reflected in her ability to erase every sign of the number four from her children’s lives, be it their birthday (“happy second three!”), their clocks (“it’s a quarter to h!”) or their bodies – the latter of which falls to the wayside when Louis cashes the check (numbered 4444) and leads Eddie to break his… you guessed it, his forearm.

Thankfully, “Very Superstitious” avoids some obvious ending about how lying gets you nowhere in life – ultimately, Eddie gets his first taste of politics when his misappropriated war stories get him elected to the student council (boy, doesn’t that sound familiar?), a position that will certainly be useful (at least on his resume, which current consists of “You were born, you like food, and you ran for president”) even if it comes at the cost of his free period every day. The episode offers a little karmic justice (again, the whole “fore”-arm thing), but it’s less concerned with the idea of lying than I expected it to be, which makes the episode – and the third act in particular – a lot more entertaining than I may have initially expected.

On the other hand, I’m not sure what to make of the grandmother. As great as the little brothers have been, Grandma Huang’s been a cipher for Eastern-sounding background music and couple of bland, random jokes that may be funny, but don’t land with any kind of weight, being as we only know her as the “old lady who raised Louis, who sits in a wheelchair all the time.” The more prominent she becomes in the episode, the more troublesome: as much as I enjoy her fooling the kids into getting her Garfield glasses, the shamanistic ritual she performs to rid the house of bad energy preceding it is the kind of “wacky foreign voodoo crap” material I think Fresh Off The Boat is better than.

This is a small complaint, of course: Grandma is still a riot in this episode – and even though it doesn’t offer any attempts to connect mother and son through this idea of truth, it doesn’t really need to. We’ve got Fresh taking shots at a smiling Scottie Pippen (none of the kids want to wear Air Pippens), Jessica being paranoid, and Judah Friedlander playing a broad, Jeff Rosso type. “Very Superstitious” isn’t trying to be revelatory, or re-affirming, just funny, and it does a great job at that, showing off the show’s improved balance between generational sets of characters and delivering a funny story that isn’t concerned with its ultimate weightlessness, even though it initially presents itself as taking on an Important Parental Moment.