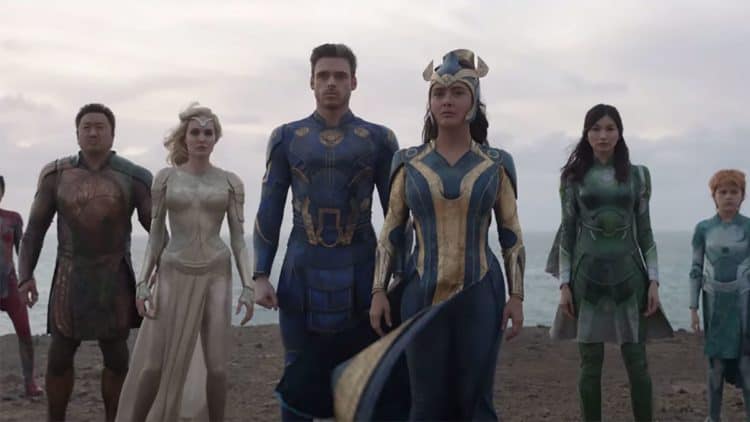 Currently, Marvel’s Eternals is dominating American box offices as the latest offering from Chloe Zhao and Kevin Feige expands the Marvel Cinematic Universe in intriguing and exciting ways. However, this article will highlight five great movies featuring the cast of the popular Marvel film, whether they’re the lead or simply a background character. The only type of movies exempt from this are animated features so don’t expect Puss in Boots, Shark Tale, or Ku Fu Panda. Let’s gets started with the first film.

The Gangster, the Cop, the Devil

American audiences may not be familiar with Ma Dong-seok; however, the Eternals actor has been in over a dozen features including one of his best, The Gangster, the Cop, the Devil. The 2019 film plays somewhat as a buddy action film, with Ma Dong-seok playing the gangster and Kim Mu-yeol as the cop trying to take down an elusive serial killer. The Gangster, the Cop, the Devil works because it’s genuinely a compelling story that features a great cast of characters and some sweet action sequences throughout its 1hour and 50-minute runtime. However, the action never comes over the story and plot that showcases the dangerous criminal underbelly in South Korea helps keep the narrative running smoothly.

Based on true events from the real-life relationship of Emily V. Gordon and her husband Kumail Nanjiani, The Big Sick tells the simple story of a Pakistani who meets the American graduate at one of his stand-up shows. The two have a hot sexual encounter that evolves into a serious relationship that likely won’t be met with the same happiness with Kumail’s traditional Muslim parents. Suddenly, Emily becomes ill and the bond between Kumail and Emily’s parents grow deeper thanks to their love for the same person. The Big Sick feels earnest, genuine, and most importantly, funny. Zoe Kazan and Kumail have fantastic chemistry that’s infectious; We want this love to last because the two actors come across as likeable people stuck in a terrible situation. The Big Sick avoids classic romantic-comedy tropes and handles the topics of Kamil’s Muslim customs and Kazan sickness with sensitivity and care. Of course, another reason that this movie is great due to supporting characters played by Holly Hunter and Ray Romano.

Featuring Gong Yoo from Netflix’s Squid Game and Ma Dong-seok, Train to Busan is more than just your run-of-the-mill zombie film. It’s a social commentary that manages to be scary, funny, and thought-provoking. The movie follows a business man and his estranged daughter, who become trapped on a speeding train with other passengers during a zombie outbreak in South Korea. Train to Busan doesn’t hold back on the gore; however, it never uses violence or bloodshed as a force to drive its story. The film is packed with developed characters and Gong Yoo’s charisma helps carry the film to its 1hour and 58-minute runtime.

A technical and nerve-racking masterpiece, 1917 follows two British soldiers who have to follow a seemingly impossible task: they must race against time to cross enemy territory to deliver a message that could potentially save 1,600 of their fellow men, including one the soldier’s brothers. While 1917 lacks in the character development aspect, the film makes that up with an engrossing plot that has you on edge of the seat from the beginning. The danger that these two soldiers deal with throughout the movie is consistent due to Sam Mendes expertly crafting obstacles that could ruin their mission. Given Mendes’ work on Skyfall, Spectre, and Jarhead, it’s no surprise that the action scenes are tremendous, and the film as a whole is a visual treat. Definitely one of the best world war films of the 21st century.

Who would’ve thought that the guy that made The Hangover series and a bunch of other comedies throughout his career would make such a great Joker origin story. Before the “Clown Prince of Darkness” was fighting his greatest nemesis, Batman, the film showcases the mentally unstable Arthur Fleck trying to survive the hell known as Gotham City. While Joker isn’t the most original film in the world, the character driven piece does an excellent job of showcasing the Batman villain’s descent to madness. The social commentary of the film is a bit on-the-nose; however, that doesn’t distract from the powerful message conveyed in this 2019 origin story. Not surprisingly, Joaquin Phoenix is tremendous in the lead role; The Oscar winner doesn’t just play the infamous Batman villain, he embodies the spirit of Joker thanks to his mannerisms and body language that characterizes the comic book iconic. Joker is an example of how to properly tell a villain origin story.