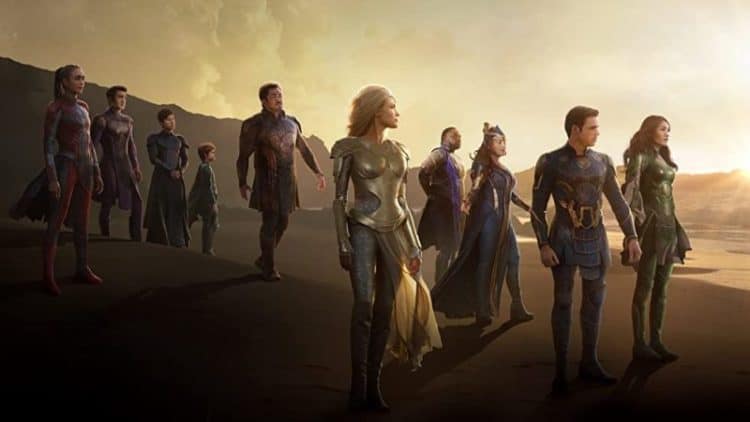 Sometimes when pitting combatants against one another, and especially when taking individuals that are vastly different from each other in terms of physical appearance makeup. The Eternals are immortal beings that have been cloned who knows how many times while having their memory erased each time to avoid the pitfalls of having to endure the press of millennia, but they are also powerful individuals that have busted loose from their service to the Celestials. In the movie, it’s shown that their most powerful effect could kill a Celestial, but on their own, they’re quite powerful. The other combatants, the Transformers, might appear to be far more powerful since they’re bigger, they appear to be stronger, and they’re likely more versatile since they can lose limbs and other parts and be cobbled back together. But like all living beings, Transformers can be killed. What might happen if the Eternals, who fight Deviants, powerful creatures that are the anthesis of the Eternals’ existence, were to come up against the Transformers in a deathmatch? It’s not that likely since the Autobots might want to talk and come to an agreement, but one can imagine that the Decepticons wouldn’t be as welcoming.

Looking at the two groups, some might see machines versus flesh and blood and think that the Eternals don’t stand a chance. But the truth is that both groups are insanely powerful and have been around for quite a while by earth standards. The appearance of flesh and blood doesn’t mean much when pitting these two groups together, especially since each of the Eternals that fans have been introduced to would likely bring their abilities to bear quickly to withstand the force that several of the Decepticons would bring to bear. There are a few individuals that would fare better than others, but it’s fair to say that Ikaris would seek to decimate any intelligent robot that stood against him, either with his immense strength or various other attacks. Sprite’s illusions might not work quite as well, but there’s a chance that she might be able to keep the Decepticons off their game for a few crucial moments.

Druig’s ability to control minds might not work quite as well, but it feels as though it would depend on the minds he was trying to touch since it’s very possible that several Transformers might be a little more susceptible to such an attack. Makari would be an interesting opponent for the Transformers, but it does feel as though she would be more of a distraction, much like Ajak. Gilgamesh and Thena would be fun to watch when pitting them against the Transformers since their fighting prowess is great enough that they can punch way about their weight class, as Gilgamesh’s strength would no doubt allow him to smack several of the Transformers around, and Thena’s speed, skill, and agility would keep her in the fight for some time. Kingo doesn’t feel as though he’d be able to do much honestly, as even his most powerful blasts would likely irritate the Transformers and do little to no damage. On the other hand, Transformers such as Megatron, Optimus Prime, and possibly even Bumblebee would give the Eternals all they could handle and more, since these are just a few of the greatest fighters within the ranks.

Some might want to argue that since the Eternals took down a Celestial that they might be able to unite and create the same effect to take down the Transformers. But the funny thing about this is that the Transformers have fought threats that might actually be equal to the Celestials, or at least close to it. This would be a good fight without any doubt, and a tough one as well. There’s no way to truly discount the power of the Eternals since they were designed to be strong enough that they could withstand just about anything. The one Eternal that might prove to be the most problematic for the Transformers would be Phastos since his ability to create just about anything would be invaluable. But Sersi could likely help quite a bit as well since her ability to change the molecular structure of almost anything feels as though it would be a serious danger.

One thing to note however is that for all the advantages and powers that the Eternals have, the Transformers could possibly have an answer for them. Calling this fight for one side or the other would be a little tough, but the best thing to say is that it would be a tough, drawn-out engagement that wouldn’t end quickly, and would see the termination of several of the combatants before a winner could be decided. But it does sound reasonable to say that Optimus Prime would be one of the last ones standing. Apart from that, it’s a guess as to who would overcome who.