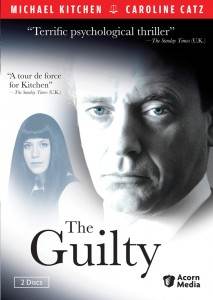 The Guilty is what Shakespeare would have written if the Bard had written for British television. The 1992 miniseries, starring Foyle’s War‘s Michael Kitchen, is a tour-de-force of television. It’s gripping from beginning to end. It was so gripping, in fact, that I deprived myself of precious sleep in order to finish watching it all the way through (I’m still depriving myself of sleep, even now, because I’m so enthusiastic to write this review).

I didn’t expect much upon receiving my copy of the series. The packaging isn’t quite noticeable at all. In fact, it’s rather plain: the only real color in the image comes from Michael Kitchen’s stern eyes. The rest is faded black and white, providing a very bleak image that might put off those who aren’t familiar with the miniseries (or those who haven’t at least seen the 2000 film adaptation starring Bill Pullman). However, the austere palette only goes to prove one thing: never judge a DVD by its cover. While it is quite bleak, The Guilty is anything but black-and-white. It’s vibrant, full of color, and absolutely lives up to the review emblazoned across the top of the cover: it’s a “terrific psychological thriller” in every sense of the word.

Now, the DVD set itself is very barebones. The only special features are subtitles; the two discs contain roughly around 100 minutes each of the 200 minute series, and that’s about it. A recap of the first disc appears on the second, but if you watch it all in one sitting like I did (something that was surprisingly difficult to resist), that feature will be worth it. You’ll be all about the show for three-and-a-half hours straight. A recap only throws a wrench in the works.

The premise of the show, much like the show itself, is dark. Steven Vey, an ambitious and successful barrister is on the verge of becoming a judge — a giant career move — when he drunkenly rapes his secretary. Meanwhile, Eddie Doyle, the son Vey never knew he had, comes to London to reconnect with his father and ends up falling in love with the secretary, Nicky — right as she attempts to blackmail the father he is trying to reconnect to. Disaster results.

Who the show really has fun with is the audience, successfully stringing them along for three white-knuckled hours of suspense. It’s the kind of show that makes you bite your nails and shout at the television. It’s impossible to predict how the series will end until it does, and when it does, you’ll be left satisfied. Surprised, and satisfied. And really, what more could you ask from a show?

The Guilty will be available on DVD January 4. It’s part of Acorn’s first batch of 2011 titles, which includes the Martin Clunes comedy Dirty Tricks and Enemy at the Door, Series 2. You can find reviews of these other two titles, also at TVOvermind.

You can order The Guilty on Amazon through this link for $35.99.