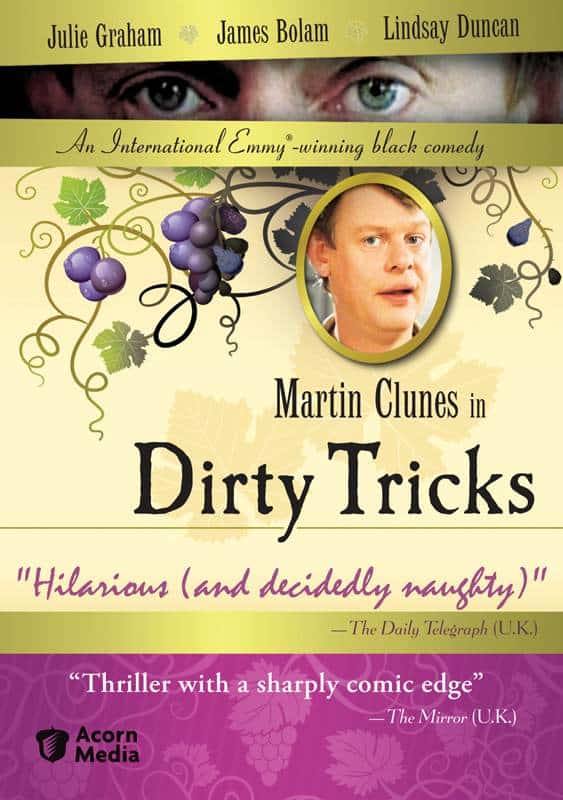 The show struck me immediately as being similar to Desperate Housewives, though from a male perspective and much more focused. The show stars Doc Martin‘s Martin Clunes as an unsuccessful Oxford graduate teacher who becomes friends with a rich couple. This friendship becomes incredibly different when he begins having an affair with the wife, Karen (Lindsay Duncan). Soon, both Karen and her husband meet sudden – and Our Hero claims accidental – demises. But is he telling the truth? As he flees from the law that has accused him of murder, the protagonist recounts his tale in a cheeky story.

The miniseries, which lasts about two and a half hours, is a quick watch and is a lot of fun. I didn’t expect to enjoy it going into it, but found its zaniness – and Clunes’ absolutely fantastic performance – too engrossing. It does lose steam in the second of the two episodes, though thankfully, when it wraps up, it has a satisfying end reminiscent of Guy Ritchie’s turn of the century gangster flicks.

The cast is all wonderful, and Clunes has to work hard to make sure the supporting cast doesn’t completely steal the show. Two characters – a little girl and a South American immigrant – are the best thing about the show, and their sporadic appearances are absolutely fantastic, adding variety to a series could have really only focused on its two leads. These characters pop up a lot as the series goes through its breakneck pace, and add a bit of that “sharply comic edge” that The Mirror raves about on the cover of the case.

You can’t really call the DVD a set, because it’s the first item from Acorn Media I’ve received that only has one disc. The set, like all releases by Acorn, doesn’t have many bells and whistles in the packaging. It’s a simple case with the DVD in it. Special features are scarce, too: it has a handful of on-screen biographies/filmographies of the cast the director. Even those are only words displayed on the screen — the only video the set has is the show. And that’s okay, because the show is entertaining enough to carry the whole set.

Dirty Tricks will arrive on January 4, 2011, alongside fellow Acorn offerings such as The Guilty and Enemy at the Door, Series 2 (both of which have been reviewed on TVOvermind as well). You can order the series on Amazon for $26.99.