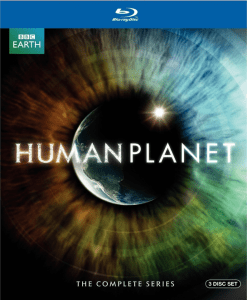 With grandiose titles like Life and Planet Earth, BBC’s documentary imprint certainly looks like it wants to be the king of documentaries, and perhaps deservedly so. They’ve tackled huge topics with beautiful cinematography. “Definitive” is the adjective that comes to mind.

Now, with their new documentary Human Planet (released on Blu-ray 4/26, just two days after its run on Discovery Channel wrapped up), they’re still cementing their place as the creators of panoptic docs (panopdocs? May want to copyright that). This time, though, they’re focusing less on the natural world than how human beings interact with it. After all, we are the predominant species on the planet (unless you count Doctor Who‘s Silence), and we’ve had impact on just about all of the planet. Of course, even when you take a geographic approach like Human Planet does, you can’t expect to show all of it. What it does show us, though, is a lot of really, really beautiful stuff.

Watching this set on anything but Blu-ray is absolutely a crime. The high definition makes every wide shot absolutely beautiful. It’s the closest I’ve ever been to looking like one of those visibly shocked customers on television commercials. At one point, I caught myself with my mouth hanging open. And the best part? The Blu-ray makes the cities look almost as majestic as the rest of the natural settings the show depicts.

John Hurt (V for Vendetta, 1984) isn’t particularly memorable as a narrator, but he certainly is the token “old British actor” that these documentaries so often use, and he plays that role to a ‘T.’

The making-of featurettes, which occur at the end of every episode, are the set’s only real special features, are fascinating but really don’t shed any major light onto the series. It’s best just to watch the series itself in majestic Blu-ray, and be repeatedly shocked by just how amazing it really is.

Get it on Amazon.