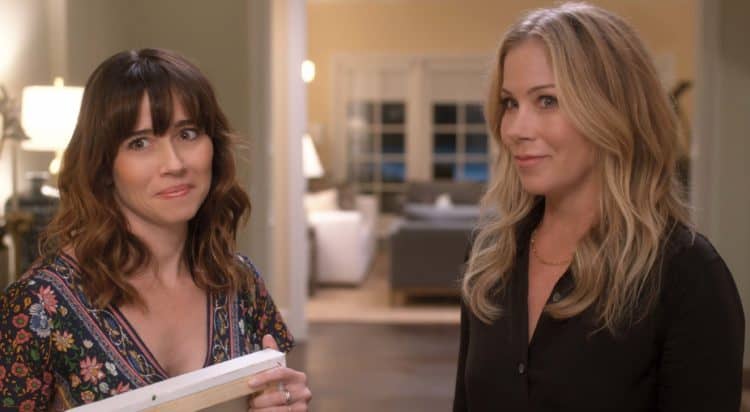 Dead to Me is a popular series that aired on Netflix that a huge array of audiences enjoy. From true crime buffs to comedy-loving couples, there are moments that just about everyone can enjoy. Below are our favorite moments that range from being hilarious to heartwarming to empowering.

1. Jen Denying Judy a Hug When They Met

From the very start of the series, you get a clear idea of the personalities of both Jen (Christina Applegate) and Judy(Linda Cardellini). Judy is an overly nice free-spirit who wants to make everyone around her feel seen and loved. Though Jen has a good heart, she’s a little rough around the edges. When Judy asks for a hug, Jen pauses for a few moments before saying “No!” with a confused and stern tone. This moment hilariously captures the polar opposites the two of them are from the beginning.

2. When Jen and Judy Share Their Own Ways of Coping With Grief

One of the funniest moments in Dead to Me is seeing the two women share their ways of coping with grief. While Judy enjoys smoking marijuana on the beach to clear her mind, Jen has her own form of meditation. There are many moments in time that Jen “meditates” by listening to heavy metal music, but when she shows Judy her form of meditation it definitely takes her by surprise.

3. Jen and Judy Staying on the Phone All Night

While you may think that there is no way these two entirely different women could get along, you start to see that they do have some things in common. They find comfort in talking about their love for Entenmann’s Chocolate Chip Cookies and watch the same TV show together while on the phone. Their friendship begins to form as they bond over the simple pleasures as well as discussing their struggles with grief.

4. Judy Coming Clean About Her Grief

Jen is a hothead, so when she finds out that Judy lied about her reasoning for being in the grief group she loses it on Judy. She curses at her and tries getting kicked out of the group, only to find out that Judy has her own form of grief; multiple miscarriages. Though they are both going through different hardships, they can find the commonalities in their pain. It takes some time, but Jen ultimately not only forgives her but empathizes with her.

5. Jen Struggling to Deal With Lorna at Ted’s Birthday Celebration

Many women go through the struggle of dealing with a bothersome mother-in-law, so watching Jen vent about Lorna (Valerie Mahaffie) during her husband’s birthday celebration can feel relatable. Even without mother-in-law issues, there is still likely someone in your family that gets under your skin. Lorna has been critical, to say the least, of Jen up to this point and she cannot take it anymore. After losing it on Lorna, Jen even encourages the kids to destroy Ted’s life celebration cake.

6. Henry Thinking a Bird is His Dad

Losing a parent is heartbreaking and confusing for kids, and “Dead to Me” is sure to show the challenges of this. A heartwarming moment is the first time Henry (Luke Roessler) tells his mom about a bird that comes to his window, who he believes is his dad who has passed. Jen tells Judy that Henry thinks that the bird is his dead father. Of course, the spiritual soul, Judy thinks that maybe it really is Ted coming to visit him from the other side.

7. When Jen and Judy Decided to Parent Together

Judy struggles to have children and has suffered through several miscarriages. After losing her husband, Jen has been trying to navigate life being a single mom. When Judy moves into Jen’s house, she starts to bond with the children and starts loving them as if they were her own. Although it may not be conventional, neither Judy nor Jen are conventional women.

8. Judy Forgetting She is the One Who Killed Ted

Judy wanted to be there for Jen after discovering she killed her husband. When Steve (James Marsden) finds out that Judy has befriended the woman whose husband she killed, he’s understandably very mad at her. It seems like Judy keeps forgetting why she wanted to be friends with Jen in the first place, to comfort Judy through her loss. She even states, “He’s the one trying to help Jen find the hit-and-run driver.” at one point.

9. Judy Complimenting Jen Even While She Was Mad at Her

Another scene that solidifies the personalities of both Jen and Judy is the scene where Jen is mad at Judy. Seeing their two personalities collide throughout the series creates a lot of funny moments, such as this scene. Being the sweetheart that she is, Judy cannot help but say something nice. As Jen is fuming, Judy says, “You look really nice.” and Jen quickly shouts, “Shut up!” In fact, no matter who is mad at Judy, she is always able to say something kind.

10. Jen Being Mad at Steve for Calling Judy Crazy

Judy states that “nuts” was practically her nickname because Steve constantly made Judy feel like she is crazy. As Jen grows to love Judy, this makes her extremely mad. When Steve told Jen that Judy was nuts, she told Judy that it bothered her, and said “Men call women ‘crazy’ and ‘nuts’ way too often to undermine us” to make Judy feel validated.