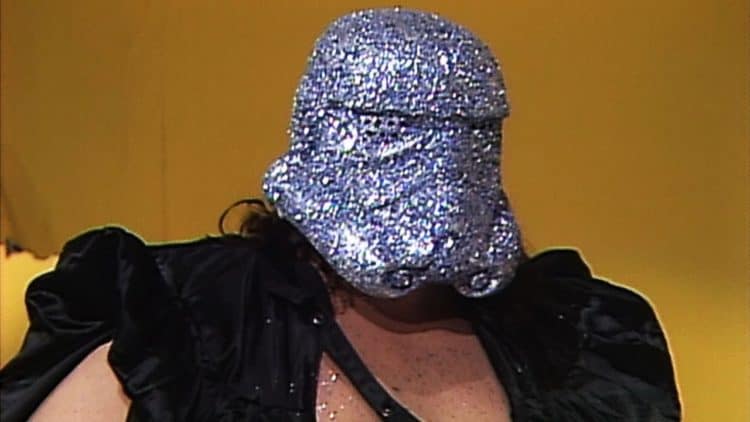 A wrestler’s gimmick can make or break them. Fantastic gimmicks such as The Undertaker have gone on to have incredibly long careers and became legendary and loved by millions of fans. But, what about the ones that weren’t quite on the same level as The Deadman? Here are the top 10 worst wrestling gimmicks of all time. 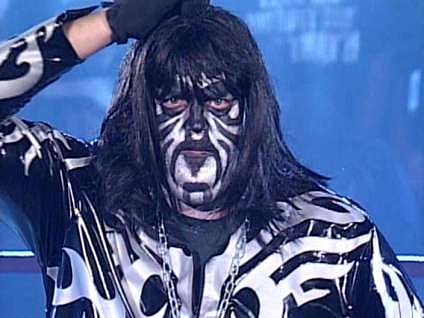 Dustin Rhodes is one of the greatest workhorse wrestlers of all time. While never winning a world championship in his career, the former Goldust can always be depended on to have a great match with anyone he steps in the ring with. At the age of 52, and having wrestled in five different decades, Dustin is still putting on fantastic matches on a regular basis. Due to his successful run as Goldust in WWE, every time he left the company to join another promotion, his new employer always tried to create their own take on the character. In WCW, Dustin was saddled with the Seven character, a very dark character that looked like a gothic cowboy version of Goldust, mixed with the personality of The Undertaker. To Dustin’s credit, he would have made this work had he been able to run with it. A few years later he made his way to TNA after leaving WWE once again and was given the Black Reign character. A character that looks almost identical to Goldust but with a black and white color scheme. The character was a flop, which was also in part due to Dustin being in a dark place and dealing with substance abuse at the time. The character is such a dark time in his career that Rhodes refuses to discuss it and will even block people on social media for mentioning it. 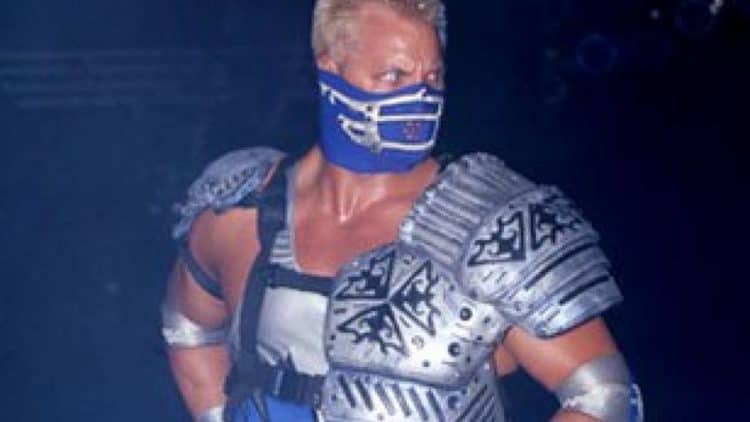 In the early 90s, a new violent fighting game appeared following the success of Street Fighter 2, Mortal Kombat. The game became an instant hit and spawned many iconic characters. One of those is Sub-Zero and in the mid-90, WCW decided to bring the character to life in the form of Glacier, a gimmick that was very clearly a rip off of Sub-Zero, donning a very similar attire. As expected, the character flopped and was quickly swept under the rug by the company. 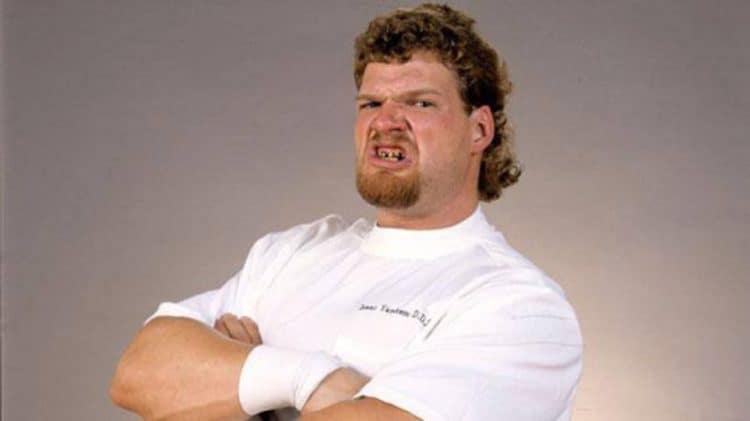 It really is a testament to Glenn Jacobs that he was able to make the best of many bad gimmicks, including the one we’re discussing here. In the mid-90s the WWF was in the mindset of every character needs an occupation. This meant that we saw wrestling plumbers, taxmen, garbagemen, hockey players, and in the case of Glenn Jacobs, he was a wrestling dentist. Despite some good matches with the likes of Bret Hart, Isaac Yankem wasn’t a good character, and it is great that Jacobs eventually got to show what he could do when he became Kane in 1997. It is quite ironic that in 2021 there is now a wrestling dentist, Britt Baker in AEW. But, she is a wrestler that is also a dentist in her day job, rather than it being the basis of her character. 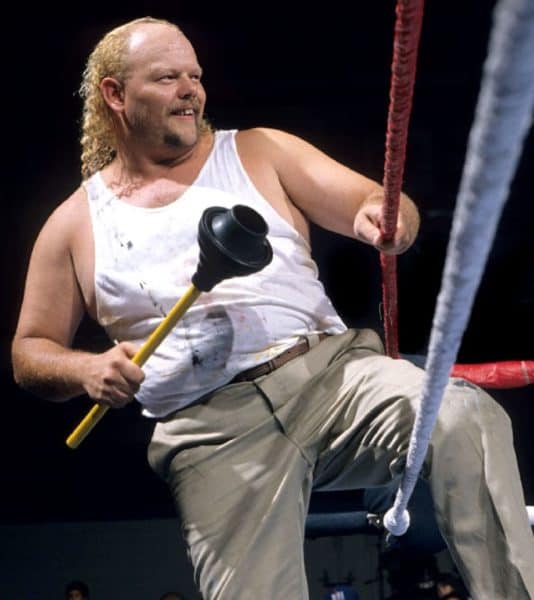 Speaking of wrestlers with occupations, TL Hopper was a wrestling plumber, need I say more? Tony Anthony was given the role between 1996 and 1997 and overall it ended up being about as good as you would expect, you’re never going to see a wrestling plumber as a world champion. 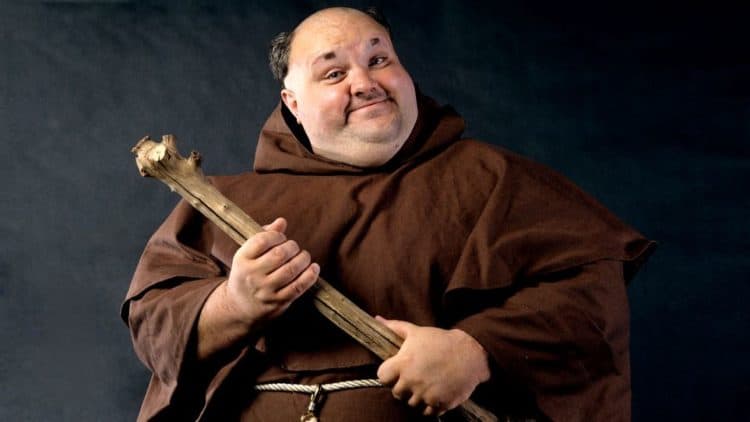 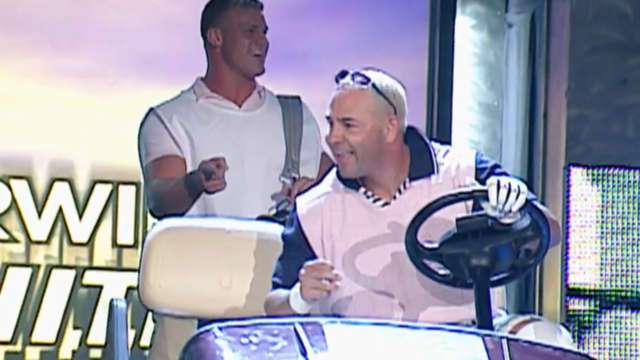 When you’ve got a wrestler as good as Chavo Geurerro Jr. on your roster, a wrestler that comes from one of the greatest wrestling families of all time, you don’t give him the gimmick of Kerwin White and have him “become a white guy”. Well, for a short time WWE did just that. Being the performer that he is, Chavo ran with it and tried to make it work and overall he did a good job. But, just let him Chavo, he’s too good for a silly gimmick. 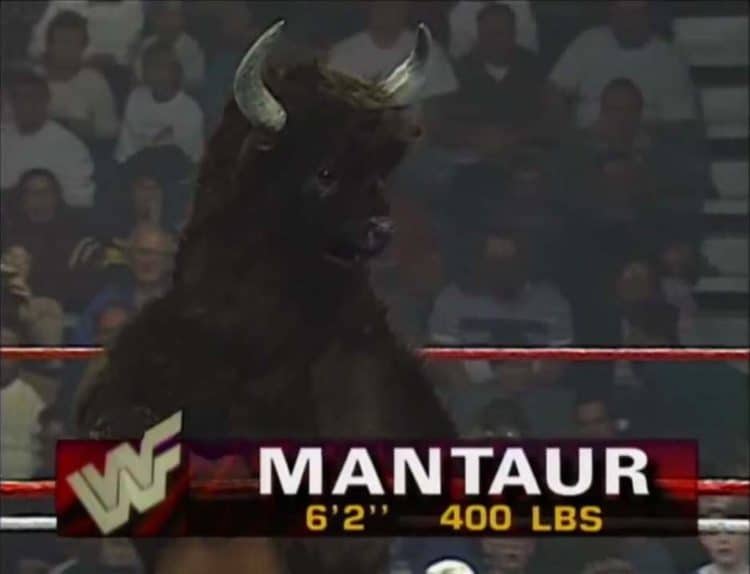 No, the image above wasn’t a mistake, this is actually from WWF television. Mantaur was based on a Minotaur who charged, trampled, and mooed at opponents, it is as stupid as it sounds. Although wrestling matches against the likes of Bret Hart and Razor Ramon, the character didn’t really go anywhere and he would be gone from the company after a few months. 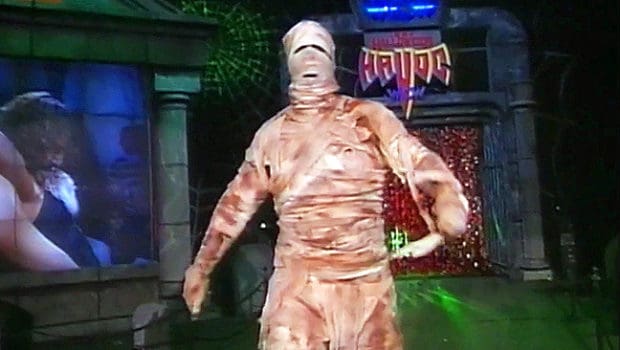 The Yeti was supposed to be based on the folklore ape-like creature of the same name but instead looked like a Mummy made out of toilet paper. Debuting at Halloween Havoc following a match between Hulk Hogan and The Giant, The Yeti completely flopped as expected, and would return a few months later as a black and yellow ninja. Don’t worry, I’m confused too. 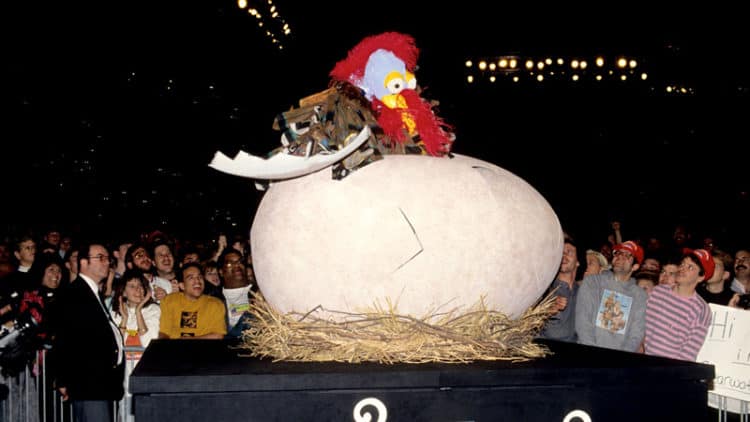 A giant egg was set to hatch at Survivor Series 1990 and no one knew what would be inside. It turns out it was the Gobbledy Gooker, which was Hector Guerrero in a turkey outfit. Survivor Series 1990 was also the event that saw the debut of The Undertaker. In the weeks prior to debuting The Undertaker believed he would be hatching from the egg and envisioned his character being called “Egg Man”, can you imagine?

The Shockmaster was set to debut in 1993 to help Sting, Dustin Rhodes, and The British Bulldog in their War Games match against Sid Vicious, Big Van Vader, and Harlem Heat. At Clash Of The Champions XXIV, he made his first appearance during Ric Flair’s A Flair For Gold talking segment, wearing a Stormtrooper helmet painted purple with silver glitter sprinkled on. When he made his entrance by busting through a wall, someone accidentally placed a plank of wood low down, causing Shockmaster to stumbled and trip over on live PPV. The debut became legendary for all the wrong reasons, and as you can imagine the character didn’t stick around for long.