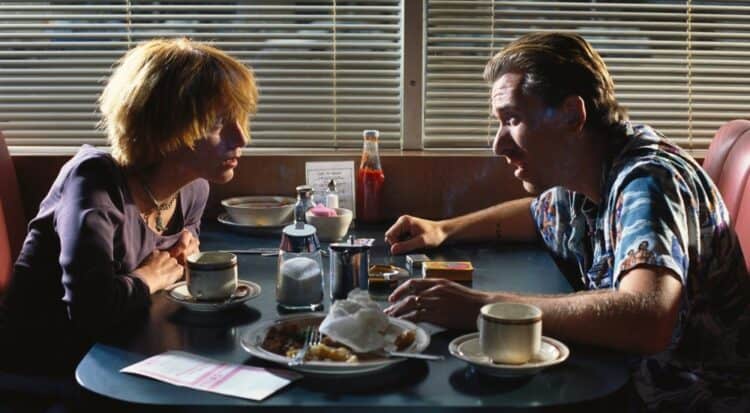 Yolanda and Ringo aka Honey Bunny and Pumpkin were minor characters in Pulp Fiction, yet they still managed to make a lasting impact on the iconic film. When we first meet the robbers, they’re discussing what they did wrong in their previous heists before they opt to stick up the coffee shop that they are sitting in. Now, the focus of Pulp Fiction is mainly on Vincent Vega, Marsellus Wallace, and Jules Winnfield; however, the premise of the feature as a whole is to focus on the criminal underbelly of Los Angeles. There’s not much known about Honey Bunny and Pumpkin other than the fact that they’re thieves with a low tolerance for pricks. Pulp Fiction is littered with a colorful cast of characters who have an air of mystery that should be explored. Who knows, maybe Honey Bunny and Pumpkin are simple criminals who just want money? However, in the world of movies, the term simple people is a silly notion. There is also an underlying message or theme when it comes to characters or actions.

People in general have multiple layers. So, the question is, what’s the purpose behind Yolanda and Ringo? Do they get their kicks out of robbing people? Are they just a low-rent version of Bonnie & Clyde? That’s the intriguing thing about these two. Why do they do what they do. Perhaps Tarantino didn’t want to explore that notion because that answer would ultimately be very disappointing, but there’s a certain fascination about digging into the roots of criminals. Who are they outside of their robberies? Are they a normal girlfriend and boyfriend? Do they have goals and dreams of being something bigger than petty thieves? They are living in Los Angeles, a city that’s full of young hopefuls trying to make it big in the world of entertainment. Mia Wallace is an actress whose career didn’t exactly take off, could that be the same for Yolanda and Ringo? That’s the beauty of crafting such interesting characters. We don’t get much from these two robbers, but we get enough to want to see the world through their eyes. No one just wakes up in the morning and decides to highjack a coffee shop.

However, this story is deeper than these two becoming petty criminals, it’s possibly the dynamic of their relationship. Is Ringo the leader of this entire operation? He’s the one that came up with the idea to rob the coffee shop. Perhaps he’s been a misguided delinquent who somehow dragged Yolanda into his world? Maybe Yolanda is the troublemaker who caused the downward spiral in their relationship? She clearly loves him. From the steamy make-out session moments before the actual stick-up to her going bananas when Jules got the upper hand over Ringo. Perhaps these are just scared people who don’t know to express their emotions and take their frustrations out on the world? Pulp Fiction highlights the trials and tribulations that these criminals go through, and though we only see Honey Bunny and Pumpkin’s world inside of the diner, their actions speak so much about them as people. Perhaps this is overthinking on my end, but that’s the fun, right? We get so invested into these worlds when it comes to cinema that all kinds of theories or ideals come to mind. It’s not exactly necessary that Honey Bunny and Ringo have a spin-off, but their time in Pulp Fiction certainly warrants one.

In fact, it isn’t too late to catch-up to Honey Bunny and Pumpkin. Jules and Vincent let them walk freely, so a follow-up to their characters over 20 years later could be fun. Are they still in the business of doing petty crimes? Or have they resided their criminal ways and are living in a beautiful island from the all the money they made? Or could they be in prison for what they’ve done? Surely, someone called the cops because their faces were present very clearly. In that moment with Jules, we get more of a story regarding these two that brings their lives full circle. They’re not psychopaths. Sure, Honey Bunny threatens to execute every bastard in sight, but they leave with a new found perspective on life once all the commotion is said and done. They’re not bad people, and that layer of Honey Buny and Pumpkin is what makes their worlds so fascinating. It’s a shame that we’ll never get into the psyche of these characters but perhaps it’s a blessing in disguise. Either way, Honey Bunny and Pumpkin should’ve gotten a spin-off following their unforgettable appearance.