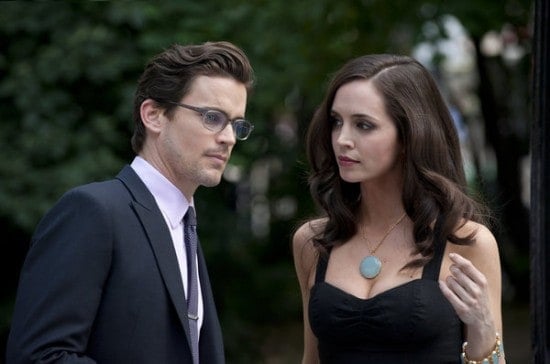 It’s a nerve-racking roller-coaster ride in this episode of White Collar. Neal goes through the manifest, the one that he lied to Mozzie about not finding in Peter’s safe, to make sure that everything is accounted for. Mozzie then comes rushing into the apartment, rambling on and on about how the FBI is onto the fact that the two of them have the lost treasure from the German U-boat. Neal, on the other hand, isn’t too worried, but when Mozzie brings up that Sara knows about the treasure, Neal says that he will talk to her and see what she knows.

After a somewhat awkward and tension-filled meeting with Sara, Peter comes to pick up Neal to work on a case. It is revealed that Matthew Keller, one of Neal’s old partners in crime and the one who kidnapped Peter and Elizabeth (in separate episodes, of course), is back in New York after stealing an Egyptian scarab amulet from the Egyptian museum.

A connection is then found between the amulet and Keller: a woman named Raquel Laroque, an Egyptologist by day and a professional fence (artifacts smuggler) by night. Peter tells Neal that Raquel has put out word that she is in need of a restoration tech. Sounds like a job for, Neal Caffrey, who is able to set up a meeting with Raquel with some help from Hale, a friend within Neal and Mozzie’s circle of what Peter calls “crime super-friends.”

Neal then gains Raquel’s trust and helps her remove the amulet from what looks like a glass pyramid and put it into a chemical solution in her apartment/lab. However, like all good things, Neal’s cover is blown when Keller comes into the lab area (through a secret entrance) and tells Raquel that Neal’s working as a C.I for the FBI (hey, that rhymed) and that he wants the amulet back. Keller and Neal then get into a scuffle, and Keller escapes before Peter and the rest of Team Burke storm into the apartment/lab.

The scene where Keller shows Neal the live video feed of the warehouse with all the treasure in it is both shocking and confusing. We know that Keller got the IP address from Sara when he confronted her posing as an agent from Interpol (his fake accent reminds me of Jason Statham), but what I don’t understand is how he was able to create a fake video feed without accessing the real feed? Unless he got a glimpse of the real feed, took sections of it, and created the fake video feed, there’s no way to tell how Keller pulled it off. I also applauded Neal’s quick thinking to lead Keller to a place called the palace to make him think that the treasure’s there and not at the warehouse. Yet somehow I think that both Keller and Peter will find out the truth sooner or later because Mozzie put a six million dollar bounty, the selling price for the Degas painting, on Keller. Not a very good move Moz.

I also liked the scene where Peter calls Elizabeth from his car early in the episode. I enjoyed the playful banter between the two of them, and it’s amazing that Peter knows Elizabeth so well and vice-versa. If that’s not the definition of soulmates, I don’t know what is. I also literally laughed out loud when I saw Neal’s facial expression after Elizabeth said that Peter is going to make things up to her by not going with her to their neighbor’s barbecue as his mind, like the rest of ours, went into the gutter.

In the end, Keller avoids capture once again, but Raquel is brought in after she attempts to shoot Keller back at the palace. Peter then tells Elizabeth about the case and Keller, and she’s not happy that she was kept out of the loop. Seems that Mozzie is in the same boat as Elizabeth when Neal blurts out that he found the manifest at Peter’s house and asks Mozzie who he sold the Degas to because they need to get it back before the FBI finds out. If they can’t get it before the FBI discovers the truth, then both Neal and Mozzie are going to be in extremely hot water. Here’s hoping that they can retrieve the painting in time.