Home
Movies
What Can We Expect From A Blue Beetle Movie? 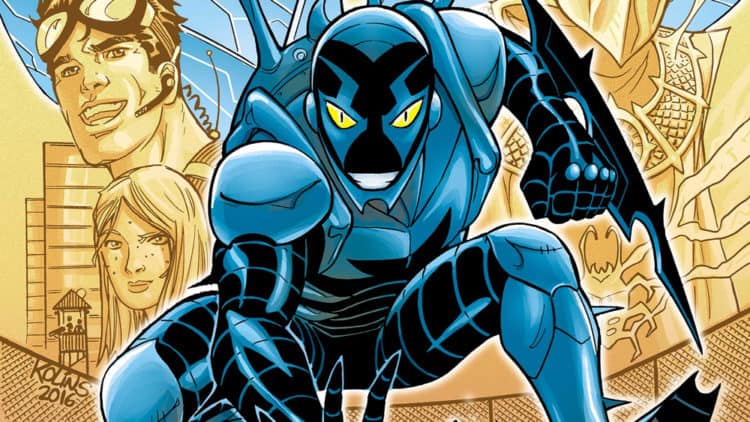 Looks like the DC Cinematic Universe is picking up a habit of giving us more lesser-known DC characters. They’ve done it with Birds of Prey, they’re doing it with The Suicide Squad, and now we’re getting some fairly new DC superheroes. The next candidate who qualifies for his own solo DCEU movie is Jamie Reyes, aka Blue Beetle. Okay, now let’s be honest, how many people actually know who this character is? If you don’t read comics, you probably won’t know who he is. Even if you’re just a casual comic book reader, you might not know who he is. It’s understandable, considering he’s not Superman or Batman. However, the Blue Beetle name is actually a mantle that has been passed down a few times. Jamie Reyes is the current and most prominent Blue Beetle. But what else is there about the Blue Beetle mantle? Well, actually a lot.

First of all, let’s go back to the topic at hand. The Jamie Reyes version of Blue Beetle is the one getting his own movie, but why him? Well, I will say he looks the coolest. He’s got the more modern look and his suit is actually what makes him powerful. In fact, the suit is what separates him from Ted Kord, the original Blue Beetle. And maybe that’s a good thing, because the Ted Kord suit really looks like a superhero costume from the 60’s. Hey, the character made his first appearance in 1966, so of course there was a lot of that classic old school DC corniness added to him. However, with him being the first Blue Beetle, I expected him to be the one to get a movie before Jamie Reyes.

Let’s actually dive deeper into that. I remember back in 2015 when it was announced that Blue Beetle and his buddy Booster Gold would be getting a buddy cop sort of movie. Now that’s a pairing that really makes sense, because those two are among the greatest best friend duos in all of comics. With Booster Gold being the more eccentric and impulsive of the two, and Blue Beetle being the smarter and more gadget-reliant one, the two of them are a fun pair to see in action. That’s exactly why I felt a buddy cop style film with the two of them would’ve worked.

Can it still happen? I wouldn’t rule out the possibility after all the crazy things superhero movies are doing nowadays. However, with the Jamie Reyes movie happening, I think the best appearance of Booster Gold and Blue Beetle we’re going to get is the Jamie Reyes movie. There’s also a critical difference between how Ted Kord and Jamie Reyes operated as Blue Beetle.

Ted Kord had no superpowers. However, his real power was his scientific mind. He’s one of the smartest heroes in the DC Universe with an IQ of 192. He’s knowledgeable in martial arts, although nowhere near the level on Batman. He is, however, similar to Batman in the sense that he carries many gadgets. Heck, he even has his own airship called “The Bug”. Call it cheesy, but that’s classic, early days DC.

Now Jamie Reyes, on the other hand, is a more modern take on the Blue Beetle hero. He’s a young teenage kid who lives with his mom and dad, and also his younger sister in El Paso, Texas. As far as life of a superhero goes, his life is unusually normal. Unlike Ted Kord, he’s no rich genius who relies on gadgets. In fact, Jamie is more of a fusion of Spider-Man and Iron Man. A naive teenager who works for his family, that’s all Peter Parker. What makes him more like Iron Man is the Scarab suit that is the source of his power.

Like the spider that bit Peter Parker, the Scarab found its way to Jamie and literally threw itself on him. The result: a modern Blue Beetle that resembled the Iron Man armor. The Scarab granted Jamie several abilities, including forging advanced weapons such as cannons and bladed weapons. Not enough for you? It also allows him to fly. There you go, everyone. A blue Iron Man.

So, Jamie Reyes sounds interesting enough, but is he interesting enough to have his own movie? If I had to guess, I’d say this would be an origins story. Jamie’s backstory sounds like something many directors can work with, considering he’s pretty much an everyman. However, I’m mostly interested in the original Blue Beetle. In fact, this upcoming movie could be the introduction of all the men who took up the Blue Beetle mantle. That means Ted Kord, Jamie Reyes, and maybe even Dan Garrett, the original Blue Beetle. You want to talk about old? Dan Garrett debuted in Mystery Men Comics in 1939. That’s the same year Batman made his debut in comics!

Now my theory is that director Angel Manuel Soto (who I’m not familiar with), will have Jamie Reyes and Ted Kord meet, with Ted being his mentor. Now they can make some changes to their origins and have Ted Kord, being the genius scientist that he is, conducting experiments on the Scarab in order to find out more about it. Eventually, the Scarab would escape and cross paths with Jamie. Once it merges with him, Jamie will have to spend some time learning about the Scarab’s powers and now to control it. However, unlike the Iron Man armor, the Scarab is a living thing. It chooses to bond with Jamie and they eventually learn to fight together.

This will be an interesting dynamic to explore in the movie. Just imagine yourself as that young kid who gets inside his dream car. Instead that car is a living weapon, but it still looks awesome. Now Ted Kord doesn’t have to dress up in his corny Blue Beetle outfit and fight with Jaime. Instead, he can be the mentor who guides him and tries to educate him about the Scarab while learning more about it himself. This would be an interesting new take on their relationship, while possibly setting up for a team-up with Booster Gold. Seriously, that buddy cop idea with Blue Beetle and Booster Gold still sounds awesome. If he won’t work with Ted Kord, he’ll have to partner up with Jaime Reyes. Not the buddy cop idea we had in mind, but it’s one that I’ll take.

Heck, why not have a little nod to Dan Garrett? He could be an original host to the Scarab and maybe the Scarab rejected him. There are a lot of routes Soto can take with these characters, but this is a fairly unknown superhero. In my opinion, that’s enough to make for an interesting movie and opens the door for more less popular characters to get their chance in the spotlight.