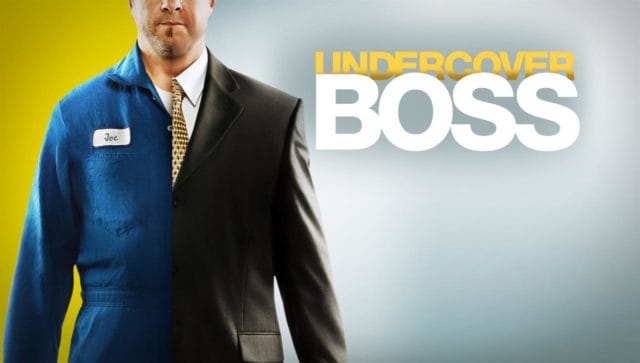 When the reality television series Undercover Boss first aired in the United States in 2010, it premiered in the slot following Super Bowl XLIV. Created to calm the growing public distrust for corporate America, it became the most popular show of the 2009 — 2010 television season. It received Emmy nominations in the Outstanding Reality Program category for each year from 2010 to 2013; winning the award for 2012 and again in 2013. The extremely popular series is franchised in 15 countries, and adored by fans. Here are five of the most amazing episode reveals:

Mitch Modell trains for a variety of jobs during his episode. He’s not in great physical shape, so his employees find easier tasks for him. They give him a picture of what it’s like to work at minimum wage on labor-intensive jobs. Modell considers how little he understands the work his employees do. He’s embarrassed by the lack of communication between upper management and employees. Modell discovers that several of his stores are not properly stocked for his customers’ needs. He meets Angel, who lives with her children in a homeless shelter. Before that, they struggled to eat and slept at bus stops. But, she encourages Modell to keep trying with the belief that life will get better for him.

Modell realizes that his company has curtailed spending at the expense of his most needy employees. He invites his four employees for his big reveal at CitiField; the home of the New York Mets:

Cloobeck is the head of a half a billion dollar-company which sells time-share vacations all around the world, and of different varieties. His company motto is YES. Whatever a customer wants and needs, they get. He decides to visit some recent property acquisitions. Randy trains him to repair a roof air conditioner, but Cloobeck starts an oil fire. Sara makes him livid because she isn’t properly trained to work at a company call center. He learns how to plaster and paint with Greg, but discovers that the painter’s safety glasses are the cheapest version. While hand sanding, he learns that the resort needs electric equipment and additional maintenance staff. Front Desk Agent, Amanda, shows him that the company needs to better organize its guest intake policies.

Cloobeck invites his team members to his beach home for the big reveal:

Jose MasTec runs a multi-billion-dollar company which provides infrastructure engineering and construction. The company is the second largest company in the United States which is Hispanic-owned, with more than 20,000 employees throughout North America.

Jose quietly struggles through four training sessions at various company sites, learning about the things which his father did to make the company great. He also learns what is needed for its future.

At the big reveal, he has the chance to make things better for the employees he encounters. Jose calls employees to the Freedom Tower, where Cuban immigrants were processed when coming to the United States. The street outside is named after Jose’s father.

With 520 worldwide locations and revenue annually of over $300 million dollars, Fast Signs is the largest sign company in the world. Monson had to make many difficult decisions to keep the company working through tough financial times. Her surfing brother broke his neck as a teenager, becoming a quadriplegic. Her mother was a violent alcoholic who shot herself. Monson decided not to have children, and become work-focused.

Carol travels to four company sites. She trains with Jen, who believes the company needs better marketing materials. She learns from Sheldon that the company has no online ordering capability. She installs signs with Gary. They take a break and talk about Gary’s life in a gang, dealing drugs, and facing life in prison without parole. The judge miraculously dismisses his charges. Gary tells her his family lost their house that day. Carol also meets Scott, a franchise owner. They install an outdoor sign; standing in a cherry picker in the wind.

She brings all the employees to her favorite Nellie Gail equestrian center in Laguna Hills, California for the big reveal:

Forman Mills is one of the fastest growing discount bargain store company, worth a quarter of a billion dollars. Rick Forman describes it as a huge flea market with unbelievable deals. He made money at flea markets as a kid, and then decided to locate his stores in unwanted inner city areas. The company has brought hundreds of jobs to communities which had none. Seeking valuable information before a huge company expansion, Forman goes undercover to check up on how his employees are doing.

Forman makes stops at four key locations in his company. He trains with Sales Associate Mshinda, who unsuccessfully attempts to teach him how to organize the sales floor stock. He trains with Back Stock Coordinator Elizabeth, who gives him fork-lift and freight wrapping lessons, but admits he is terrible. Nikia try to teach him her customer service skills, but he fails miserably with keeping the customers happy because he works too slowly. He meets with Kurtis, who tries to train Rick how to clean the smelly bathroom first. Rick is excited about being home at the first store his company ever opened. He did a terrible job cleaning the bathroom. He cut up boxes for recycling. Kurtis tells him the company doesn’t care about the employee’s futures. Kurtis mentors at homeless shelters and gives to others after recovering from being a homeless alcoholic. He invites Rick to go with him to the shelter, where they distribute items Kurtis has bought with his own salary.

During the final reveal, Rick invites the employees who trained him: