Home
Movies
This Back to the Future DeepFake Video Starring Robert Downey Jr. and Tom Holland 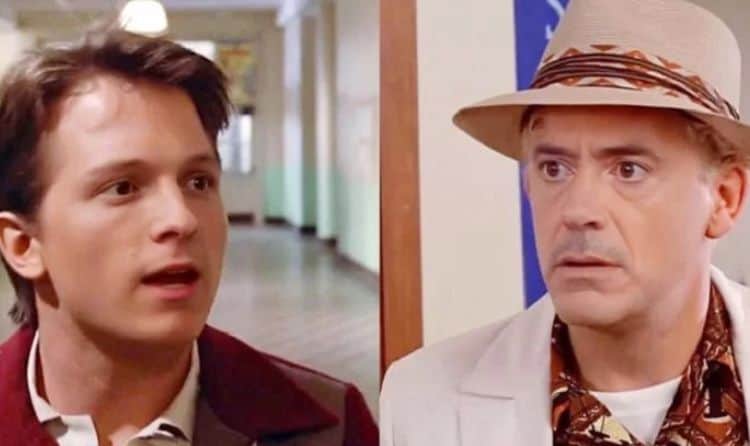 Is anyone else thinking this could work if someone actually pulled the trigger on it? Robert Downey Jr. and Tom Holland have been a seriously dynamic duo for long enough now that it would only make sense to put them together for a reboot that people would absolutely love to see and have been talking about on and off for years now. Sure, it hasn’t been the hottest topic out of the many others that have come and gone but it’s still something that would be a lot of fun to see if only because it would be the revival of something that’s been waiting for the perfect actors to come along and assume such iconic roles. The chemistry between Holland and RDJ has been perfect since their time spent in the MCU and at this point it’s great enough that it could possibly be used in this manner without much of a fuss. Whether or not each actor would agree to it would be another thing entirely since at this time it does appear that they’re both kind of busy and might not be able to jump on the time-traveling wagon at the moment. Maybe a collaboration further on down the line might be possible however, as this is just too perfect to pass up, and a return to the days of Marty and Doc trying to make heads or tails of time travel would be kind of fun to see. Annie Walton Doyle of 22 Words has an interesting story about Holland and RDJ that might be kind of amusing.

It might even be that any questions pertaining to the three movies, if in fact all three were remade, could be addressed since time travel has been discussed in a big way throughout the years, and its effects have never been fully agreed upon since one version tells it this way while another version tells it that way and reality has an entirely different take on it, apart from claiming that it’s not real. With the type of characters  that Holland and RDJ have played in the past it’s possible that they might be able to bring something to the screen that might be capable of showing a great deal of respect to the original but also bring it fully into the modern era without as many possible mistakes or things left undone or unsaid. It might be that a lot of Back to the Future fans would look at this idea and say ‘no way’ but it would be as close to the original as one could ever get without having to compromise on looks or acting.

Let’s be real with this one, there’s probably no one that could take on these roles as well as Michael J. Fox and Christopher Lloyd did, but even if they wanted to come back Fox’s current health issues are a little too great to get around Lloyd’s advanced age (the guy is in his 80s at this point after all) kind of make it impossible to produce a remake of this movie with the originals. It’s true the Fox is not nearly as incapacitated as some might think, he does take medication for the condition and has more control over it than he did at one point, but there’s still the reality of the condition and the idea of what might happen if he pushes himself too hard. To see both men have cameos in a remake would be a must without any doubt, but seeing Holland and RDJ take over these roles would be about as good as it can get since really Deepfake has managed to perfect this idea in this simple video. The debate on whether or not this could be used on a much more profound level is still ongoing as you might think but at the very least, as of now, it would appear that we’re more likely to see more and more of these videos than any serious attempt to replace deceased and possibly ailing actors with new acts that could essentially erase them from the movies. Ian Sample of The Guardian has more to say on this. That sounds like something that would definitely rile up enough movie fans to push more than a petition when it comes to keeping the entertainment we love and cherish as unchanged as possible.

But all the same, hats off to Deepfake for this one since it does inspire a great deal of confidence in something that could possibly happen if enough people agree and are willing to come together to make it a reality. Just think about the effects of the first movie and everything else from that point and then think about how it might translate today. The effects would be insane, the story would hopefully be mostly the same if only slightly altered to accommodate the current era, and the actors would be dang near perfect for what was needed. While I won’t start a petition for it, I’d definitely be down to see if it would work, as would many others I’m certain.