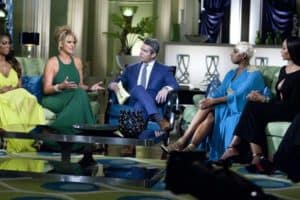 Did The Real Housewives of Atlanta bring the pain by welcoming back Kim “Wig” Zolciak-Biermann back into the fold during part two of the reunion special? Um, no.

The second installment of the three-part reunion was highly anticipated with the return of Kim, who left the show in dramatic fashion earlier in the season, for two reasons: 1) because Bravo head honcho Andy Cohen brought up the lawsuit fellow cast mate Kandi Burruss served Kim earlier that very morning before the reunion taped, and 2) being Kim making amends with her bestie turned nemesis NeNe Leakes. Both events were indeed touched upon, but not to the point of the Fort Knox-esque secrecy surrounding either segment. In fact, the NeNe vs. Phaedra showdown was way more entertaining than what Kim brought to the table since we finally got a glimpse of sorts to why NeNe has had little to no love for Ms. Parks.

According to NeNe, Phaedra was the one who filled the producers in on Marlo Hampton being a great foil for NeNe since both women allegedly shared romantic ties with Charles Grant. This piece of information was an eye-opener for me since I had thought Andy Cohen seeked out Marlo after the infamous Watch What Happens Live! Aftershow incident where NeNe was a guest and Kim called in to argue with her then enemy. Over the phone, Kim dropped Charles Grant’s name, accussing the newly minted actress of cheating on Gregg with the guy. The only problem with this info was that it was dated before season three even premiered, meaning Phaedra was not even part of the cast at that point. The whole situation still seems iffy with me, but no matter who tried to instigate a huge war between NeNe and Marlo, we all know that it failed miserably, leaving everyone involved looking like Boo-Boo, the Fool.

Then just when you thought NeNe was done with Phaedra, she drops another bombshell about the attorney-turned-mortician contacting NeNe’s estranged sisters to get dirt for the show. If true, that does sound all shades of messy, but, again, a part of me can’t help but feel like there is more to that story as well than what we heard. For starters, why are NeNe’s sisters just telling her about this now? Does it have to do with the new Hollywood starlet bringing in “ Ryan Murphy checks” from her appearances on Glee and The New Normal, plus other forms of revenue flowing in? I don’t know, nor have I seen, any of NeNe’s sisters, so I don’t know if they are already well off or not, but I still think that their timing on revealing Phaedra approaching them (as well as their attendance to Aydan’s birthday party) is very suspect and NeNe should look deeper into that situation as well.

Also, while NeNe was drilling Phaedra several new ones, Kenya Moore tried her damnedest to insert a dig in on Phaedra several times, but while Ms. Parks was barely holding her own with NeNe, she was very deft in shutting Kenya’s fan-flapping behind down.

Now on to the Kim portion of the show, which pretty much dominated the latter half of the hour. 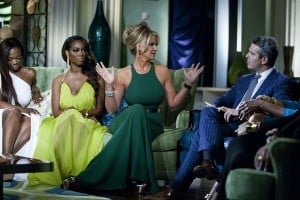 Once Kim came out, she immediately informed Andy that the nest on her head was actually her real hair. I slick wanted to get Derek J or some other hair forensic scientists to test that theory, but I digress. Afterwards, Andy immediately guided his blabber into the lawsuit between Kandi and Kim over, which the Don’t Be Tardy star dismissed as “hilarious” and left it at that. The subject was never brought up again. Womp. Womp. What was brought up, however, was the ridiculous “Kash/Cash was my baby’s name first” debacle, which revealed that not only did Kim have ‘paperwork’ showing that she had the name first, but that her husband Kroy Biermann was standing on the sidelines like a jackass version of a jack-in-the-box, ready to pounce if anything popped off the wrong way. Have several seats, Zolciak-Biermanns. Kandi was over the situation before it even began, and it seems that this particular segment was the main reason Kim even wanted to return to the reunion in the first place.

Kim also tried to defend her highly questionable comments towards Kandi’s new house (which Kim threw all on Sweetie), but no matter how nicely she tried to package that b.s., it still came out smelling like the manure that’s fertilizing my front lawn.

Finally, there is the NeNe and Kim make-up session that we were all waiting for that left us sucking our teeth, muttering “that’s all?” when it was all said and done. After all news/blog reports and the tweets between the two proving their reconciliation, one would think that we would have seen some type of discovery during this reunion special right? Well, we did, but not as elaborate as the blogs made it sound. But is it just me, or did it seem as if NeNe and Kim were a bit reserved this time around?

Every reunion since the first season, there has been an epic NeNe vs. Kim battle that would end with the two either sneering at each other or ready to slap the taste out of the other’s mouth. This time, however, the fight was just not there. Could it be that they made up before they shot the reunion?

NeNe had plenty of opportunities to go in on Kim, but she didn’t attack. Kim could have easily been fired up after the ‘No More Excuses’ reel, but she didn’t get lash out at all. Plus, when Andy brought up NeNe calling Kim a racist in the past, The New Normal star didn’t take back that she in fact labeled Kim such, but added that maybe Kim was just ignorant of her words and simply didn’t know. Oh really, Ms. Leakes? And when Andy asked NeNe about her ‘knowing’ Kim was done with the show, Kim pretty much smiled and said, “She knows me” as NeNe explained how she knew Kim was done with filming. Awwww…. 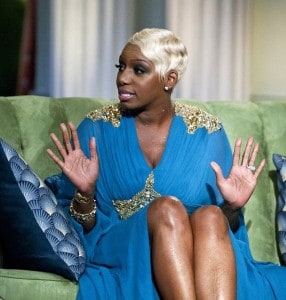 So while Kim and NeNe’s reunion was lacking in the sparks and love fest on air, it was clear that the two made up in some capacity before walking on that set that day. So in that regard, it was a sweet reconciliation, but you really had to pull back the bull crap faÃ§ade that Cohen and Bravo was trying to feed us. With that said, I still worship Andy Cohen and forgave him for the mislead regardless of me feeling some type of way about it. Any who…

Other Moments of Note From The Night:

– After being anti-social for the last year and a half with the other ladies, Kim used more excuses and “whatevers” to explain her actions. In other words, nothing was solved.

– Speaking of which, it was very telling when Andy stated how production was miffed at Kim’s flip-flopping with the Anguila dates instead of “the cast.” Hell, even Cohen himself looked a bit pissed off about Kim’s Excuses 2012 Tour and called ‘Wig’ out on her b.s. several of times. Now we know for a fact (as if we didn’t already know) that these ” Real Housewives trips” are planned before shooting, and that there are no coincidences when the cast is free to jet-set across the globe.

– Since this segment dealt with the vets of the show (NeNe, Kim, Kandi, Phaedra, and Cynthia), I was glad that Porsha Stewart didn’t interject with any nonsense. Kenya, don’t speak unless Andy sends for you next time. Okay?

What were your thoughts on this installment of The Real Housewives of Atlanta Season Five Reunion? Was it as busted as Kim’s hairdo? Or did you still think it held up the steam from last week’s part 1? 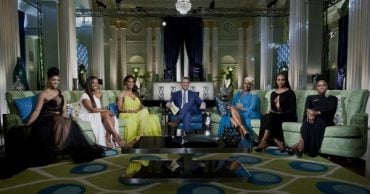 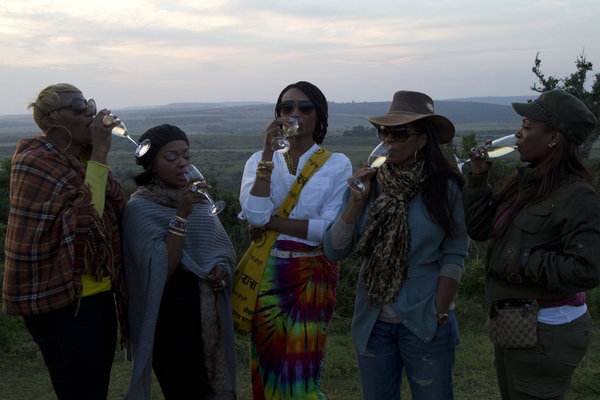 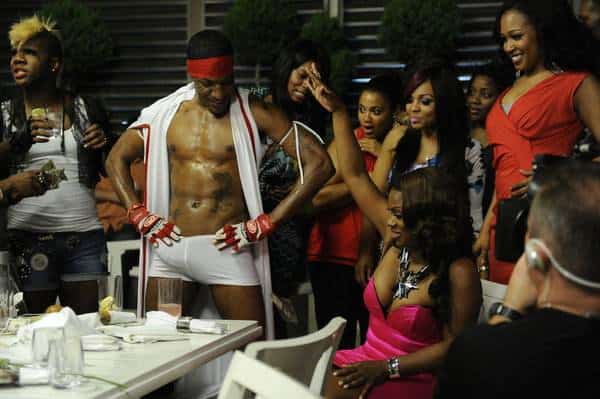 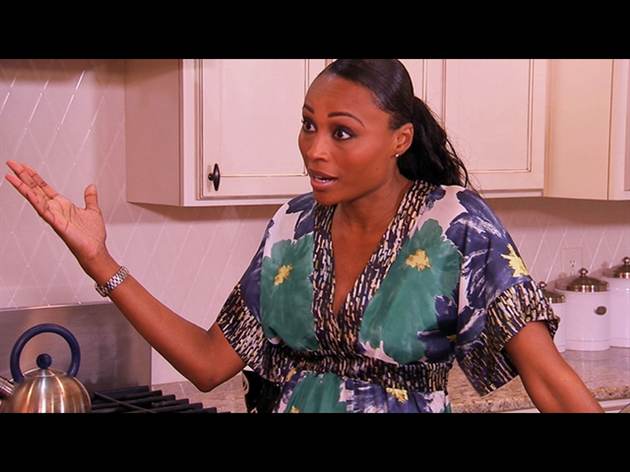