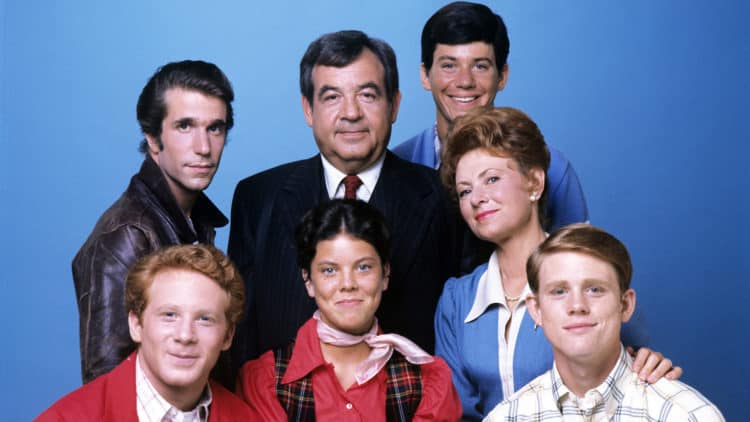 How different would Happy Days have been without Ron Howard? It’s hard enough to think about and something that a lot of us don’t want to contemplate and thankfully don’t have to, but the reason behind it is kind of silly. Garry Marshall, the producer that helped make this show great and passed away only a couple of years ago in 2016, rest in peace, was a big reason why things never changed, at least not drastically enough for Ron to leave. He’s also one of the big reasons why the show was so successful and why the actors are so thankful for the chance they got to know each other throughout the years. To this day several of them are still great friends and spend time with each other whenever they can. But the idea of Ron Howard walking goes like this as Zach Seemayer of Yahoo! Entertainment shows:

“They did come to me and said, ‘Well the network would kind of like to change the name of the show to Fonzie’s Happy Days.’ And I said, ‘Well, I don’t think I wanna be in that show. I wanna be in Happy Days and I think Henry should have, you know, every opportunity to do everything — that’s fantastic — but you know, I signed on for this other thing and I just really don’t wanna do that. I think I’d go back to film school,”

The great part is that Ron had no animosity for Garry or any of the other actors at that time, in fact he was enjoying his time on Happy Days it would seem, but he was bound and determined to stick with the show as it had been written and didn’t want to take part in something that might have been made to feature just one character and have the rest of them be glorified extras. That might seem a bit like whining to some people, but in truth it makes sense considering that the show worked as a group effort, and while Fonzie was by far and large one of the most popular characters around, he wasn’t the whole show. Thinking that Ron was worrying only about his paycheck is something that some folks might claim is the truth, but it does seem as though he was enjoying the dynamic of the show more than anything and didn’t want to upset the balance. What made it great though was that instead of walking out he encountered Garry on his way out of the meeting, as Marshall had not attended but was standing outside the door. When asked how it went, Ron told Garry his thoughts, to which Garry replied that it wasn’t going to happen.

If nothing else that probably seemed like a huge boost to Ron’s confidence in the producer and the idea that Garry had his and everyone else’s back. Whatever other issues might have come during the filming of the show the one thing that everyone agrees with is that Marshall had their best interests in heart a good deal of the time and took care of his cast. There might be some that say that Ron Howard walking out over what might seem like a trivial matter need to understand what it means to participate in a group effort versus participating as an extra to stoke the ego and reputation of a single actor. Fonzie was already a big deal on Happy Days, but to create a show that was centered entirely around him, which was the idea that almost made Ron walk, seems like it could have been a huge mistake since the entire cast had a big stake in creating a show that people came to love so much and still hold up as one of the best ever created. Thinking that Marshall had their backs in a matter such as this, and that the cast were supportive of that decision, is nothing short of awesome since seeing such a thing in show business in the current era is kind of like seeing a blue moon, it does happen and it can be noticed, but it’s rare and is something to really treasure when it does happen.

Thinking of how different the show could have been without Howard is hard to fathom really since he was an integral character that might not have had the same following as the Fonz (aaaaayy), but was still someone that people expected to see when the records got to spinning and the days started being ticked off throughout the opening song. Without him it would have definitely felt as though something was missing, so it’s easy to be thankful for Garry Marshall and all that he did for the show and the cast. To this day Happy Days is still a classic that a lot of people enjoy.