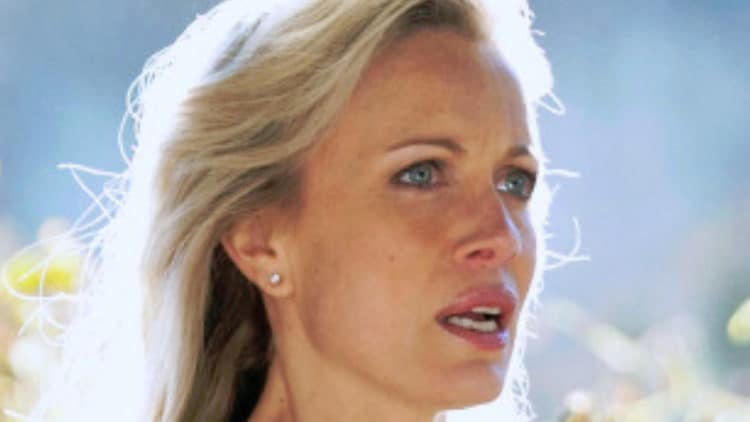 It has officially been more than 20 years since Stephanie Vogt made her first on-screen appearance. In that time, she has built a resume that includes 24 acting credits, some of which were in some very cool shows. She has shown that she has the ability to take on all sorts of projects and she isn’t afraid to step outside of her comfort zone. Now, however, she is on the brink of what could be the biggest opportunity of her career. She was cast in the upcoming Netflix series, Gloria. As we all know, the streaming giant has the power to help take actors’ careers to the next level, and that could very well be what happens to Stephanie once the show is released.  Here are 10 things you didn’t know about Stephanie Vogt.

1. She Was A Talented Athlete

Most people would say that Stephanie was a late bloomer when it comes to acting. Instead of growing up wanting to be an actress, sports were her main focus for many years. She was a talented volleyball player who even earned a scholarship to play at a junior college.

Stephanie was born and raised in Nebraska. When she was growing up she probably had no idea that she would ever make it to Hollywood. Although Stephanie will always have love for her home state, she now splits her time between living in London and Los Angeles.

3. She Went To Modeling School

Stephanie’s road to the entertainment industry was full of twists and turns to say the least. Stephanie told Flickering Myth, ” my mom seemed to think I was a little rough around the edges and enrolled me into a modeling school to help me act more like a lady. haha! Not sure how well that worked out, but it did grant me the opportunity to start working as a catalogue and commercial model.”

4. She Planned On Having A Career In Exercise Physiology

When Stephanie was in college she was studying towards a degree in exercise physiology. It’s unclear if she ever completed her degree but what is very clear is that she ended up following a completely different career path. Stephanie’s journey is a prime example of how the best-laid plans often go astray.

In addition to living in two countries, Stephanie does a lot of traveling. She is an adventurous person who is always looking forward to having new and exciting experiences. Over the years she has gotten to get some pretty cool stamps in her passport. Some of the places she’s been include Maldives, Spain, and South Africa.

Stephanie has spent the majority of her career doing on-screen work, but many people don’t realize that she’s also done some theater work. According to her resume, Stephanie was in a handful of plays including House of the Blue Leaves and Seduced by Sam Shepard. We weren’t able to find any information to suggest she plans to do more plays.

Even though Stephanie’s days as a competitive athlete are now behind her, that doesn’t mean she’s given up on staying active. Stephanie loves to keep herself in good shape and regular exercise is something that is very important to her. Whether she’s running a 5K or going for a hike, Stephanie is always up and moving.

Remember when I said that Stephanie had some great projects on her resume? One of them was the 2019 movie Fast & Furious Presents: Hobbs & Shaw in which she made a quick appearance as a newswoman. Sure, it wasn’t the biggest role, but she will always be able to say she was part of one of the most popular movie franchises in recent years.

From what we know, Stephanie has never been married. However, it does appear that she is currently in a relationship. Although she has posted quite a few pictures with her man, she hasn’t revealed any information about him. As far as we can tell though, the couple seems to be going strong.

We all know how easy it can be to get sucked into negativity, especially these days. But Stephanie does everything she can to avoid getting sucked down the rabbit hole of negative thoughts. Instead, she prefers to look for the good in every situation. Stephanie is all about joy and positivity and those are two things she likes to spread to the people around her.