Home
Television
Should Hyde Be Replaced For That 90s Show Spin-Off? 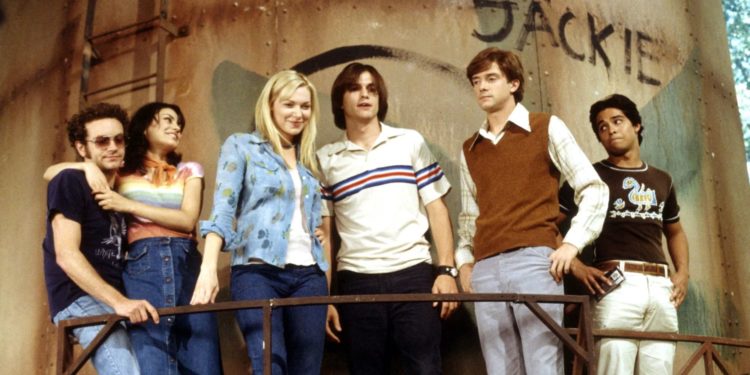 Who’s your favorite friend from the small group from That ’70s Show? I think Steven Hyde would be a very popular pick and it’s not hard to understand why. Although he was often painted as the delinquent of the friends group, he stood out amongst them with his dry sense of humor and sarcastic wit. Basically, his humor was a real pinnacle of what classic humor used to be in the good old days of comedy. In my opinion, it actually really symbolizes the comedy style of That ’70s Show. There was nothing over-the-top with the humor, including heavy profanity or crazy sex jokes. Oh no, everything that made that show great was the classic humor and how relatable it was. I mean, come on, you all know you and your friends acted like that friends group more than once.

And of course, every group has that one friend who acts a lot like Steven Hyde. You both love him and hate him because he’s a bit of a snob, but brutally honest. His sarcasm can also annoy you at times, but you deal with it because you know it’s still funny. But most of all, he puts up that seemingly unshakable exterior because he wants to conceal his sensitive nature. That really sums up the very character of Steven Hyde and it was all perfectly acted out by Danny Masterson.

Before I get into the darker stuff relating to Danny Masterson, I have to point out the recent news related to That ’70s Show spin-off. For those who are unaware, the spin-off that will continue the story of the characters from That ’70s Show will take place in the ’90s. Appropriately so, it will be titled That 90s Show. This spin-off will center around Leia Forman, the daughter of Eric and Donna. Okay, can we all just appreciate that Eric and Donna actually ended up saving their relationship in the end? After Topher Grace stepping away from the final season of the show and leaving the relationship between Eric and Donna into question, it was a treat seeing him return for the finale and reconciling with his childhood crush and former lover.

But what does that mean about the fates of the other characters? Did Hyde get his act together and take advantage of the job his father set him up with? Was Kelso able to become a functional father for his daughter? Did Fez and Jackie take their relationship to the next level? Despite the heartwarming and satisfying ending to That ’70s Show, I think we all feel like there was still a cliffhanger. The characters got their happy endings and decided to move on with their lives, but we are just so curious to find out what they did afterwards. And now, because of That ’90s Show, we’re about to find out.

So far, we have seen images of the Forman parents, Red and Kitty, doing what they usually do. They’re sitting in their kitchen and just living nice, quiet lives. It’s a no-brainer that we want to see fan-favorite Red Forman return to the small-screen and deliver his hilarious insults to whoever he wants. But is it possible he has softened up over the years? It’s possible, especially if he has his granddaughter visiting him and Kitty. That will be a fun interaction to see, but needless to say, we don’t just want to see Red and Kitty come back. We need the whole family.

Well, guess what That ’70s Show fans? You’re in luck. It has been confirmed that the original cast members will be reprising their roles for That ’90s Show. Well, almost everyone. The only original actor not slated to reprise his role is Danny Masterson for Steven Hyde. That is unfortunate news, as Hyde is undoubtedly a fan-favorite. For those who haven’t heard, Danny Masterson is currently in hot water right now, as he is about to stand trial for several sexual assault allegations made against him. These are indeed disturbing allegations and so far, it isn’t looking too good for Masterson. I doubt that this trial will end in his favor, but regardless, it will tarnish the legacy of the Steven Hyde character.

Characters are always bigger than the actor, but despite the controversy, Danny Masterson made Hyde his own. It would be very hard to imagine another actor playing Hyde, but just imagine if that were to happen. I mean, can you really have a That ’70s Show reunion without Steven Hyde? In this case, I suppose there is an exception, but the group would just feel so incomplete without his presence. What if, to compensate for the lack of Danny Masterson’s presence, it was decided that another actor should replace him? Would it even be worth it for just this one spin-off? Maybe not, but I just feel like Hyde is a main ingredient that you need to make this recipe work.

I feel torn on this subject because as a fan of the show, I prefer to see all the characters come back. Unfortunately, the controversies surrounding Danny Masterson are too serious to be ignored. If he can’t come back, then does that mean Hyde can’t come back? I can see arguments for both sides, but I still believe the characters come before the actors. Ultimately, I do not think Hyde will return for That 90s Show if Danny Masterson can’t come back. If that’s the case, I’ll be curious to see how the other friends will acknowledge his absence. I mean, it would be awkward if they just didn’t mention him at all, wouldn’t it? I guess we’ll find out when it premieres on Netflix.

What are your thoughts? Do you think it’s possible Steven Hyde will return, despite the absence of Danny Masterson? I think we can still separate the character from the actor and appreciate the Hyde character. However, it looks like we’ll have to accept that he’ll never be seen again. Quite a shame, especially since Hyde was one of the few people Red actually liked.