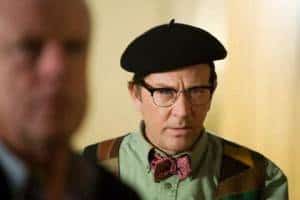 This week is about a corrupt investment banker under house arrest. But most importantly, Sophie has a boyfriend! Except he thinks her name is Catherine and he’s dumping her. Aw.

Anyway, back to the false investment firm and the guy running off with twenty million dollars. At least, he was until he was caught in his apartment, and Nate is convinced that the missing money is also still in the apartment. The problem is that so are the FBI, as he’s under house arrest. They deduce the best way to get him out of the house is through his kid, so…they go to steal a school. Fun times. I would love to get up and just be like ‘Meh, I’ll go steal a school.’

This leads to Timothy Hutton pretending he’s some sort of nerdy private school dean from like…Germany. Bad accent and all. Now I understand what Christian Kane was saying about the characters being bad actors in certain situations. Nate, Sophie and Eliot take over the school, leaving Hardison and Parker to pretend to move in to the apartment above the mark, complete with cute outfits. While Eliot and Sophie try to bolster the confidence of the mark’s kid in order to give the guy some reason to get out of his house, Hardison and Parker come face to face with the FBI. In a nice bit of continuity, it’s the same pair of FBI agents from last season, too.

Sophie finds out the kid has a singing talent and Nate decides they’ll stage a musical…at the science fair. The subsequent backlash toward putting the kid front and center in said musical only proves to Sophie that the child is being punished for the sins of his father, and while Nate wants to get to business she tells him that everyone deserves to be seen for who they really are. All of us who have been through high school can no doubt understand exactly what she means.

On the day of the musical, Hardison stays behind to try and break into the apartment, while Parker goes off with the FBI contingent to protect the mark (allegedly). This means Hardison has to be the one hanging off the side of the building and trying to cut all the wires. This does not go as well as one would hope, but about as well as we expect. Meanwhile, Sophie has to coax the kid out on stage before the whole sham is exposed…which she does by coming clean and imparting the life lesson she’s learned earlier this episode! See how that all comes together?

The team discovers that one of the angry parents is in on the scheme, working to have the FBI agents killed and the mark out of the country. While Eliot jumps the guy, the musical goes on — complete with Sophie trying to shush the fight going on in the background. In the end, they find the guy’s bag with conveniently incriminating tapes, and use the theatre’s sound system to broadcast all this evidence to everyone. The bad guys go to jail, the parents get their money back (and then some), and small children feel better about themselves. All in all, just another day on Team Leverage.

I can see where someone might find it corny how everything comes together so conveniently with Sophie’s lightbulb moment, but for me I didn’t mind at all. Generally, corny moments irk me, but this show has such a good heart to it that it really didn’t bug me. I knew where it was all going, but I wanted it to get there. And that’s the beauty of this show: you really love the characters and embrace their adventures, and want them to succeed. Not to mention, it’s a whole lot of fun getting there.