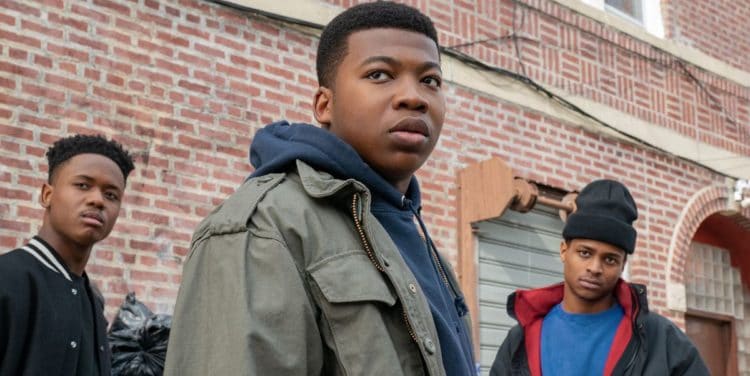 In episode 8, Jukebox is still grieving the loss of Nicole, Raq finds out that Kanan and Marvin are behind the lethal batch of cocaine that’s causing bodies to drop, and she orders Lou Lou to kill Marvin. However, Lou Lou doesn’t get a chance to do it but his house is ambushed by Unique’s crew. If you think things were heating up on the previous episode, they are outright blazing on Episode 9. Below we outline the top noteworthy events on last Sunday’s episode of Raising Kanan:

1. Marvin retaliates on Unique and his crew

A lot of shots are being fired in the opening scene of the show. Marvin calls up the same goon that ratted Kanan out to Detective Howard. Together they take a van to where Unique and his crew are and shoot up the spot and Unique’s car. Unique is sitting in the car with his son when the attack happens.  Unique’s car is bulletproof, he shields his son and survives the attack unscathed. When they escape the scene, Marvin confronts his goon about snitching to the police. Despite his pleas, Marvin puts a bullet in his head and sets the van on fire. Although Marvin’s attempt to exact vengeance for his brother is unsuccessful, Raq realizes that she needs him right now which is pretty ironic since before Lou Lou got hurt she told him to kill Marvin.  Fortunately, Marvin and Raq are able to come to a truce which we love to see since no one wins when the family feuds.

2. Detective Howard stops an assassination on attempt on Lou Lou

When Unique finds out that Lou Lou survived the attack he sends his people to finish the job. Detective Howard is supposed to meet Raq at the hospital but before meeting with her he takes a minute to smoke a cigarette outside of the hospital where he observes a nurse handing two shady-looking goons dressed as orderlies a package. The goons are armed with pistols and they attach the silencers in the elevator ride up to Lou Lou’s room. Detective Howard is able to have Lou Lou moved to a safe location and he arrests the goons in the act. He also has the nurse arrested. In reality, Raq owes Detective Howard big time for saving her brother’s life. Yet, when he pushes her to set up a meeting between him and Kanan she insists that he do her favor first regarding her illegal business.

3. Marvin and Jukebox get into a heated confrontation

Marvin and Jukebox’s relationship has been strained from the beginning and things finally come to a head. Marvin stumbles upon the recording of Nicole and Jukebox singing a love song to each other. He realizes that his daughter is a lesbian and when she catches him watching the tape he goes off. He begins to stomp on the tape which enrages Jukebox because it’s the only thing she has left to remember Nicole. Marvin and Jukebox end getting into a physical fight and for a minute Marvin takes out all of his frustration on her and it seems like he’s going to choke her to death. But then he remembers that she’s his daughter and lets her go. The scene ends with Jukebox charging off and Marvin calling after her.

4. Raq Gives Kanan The Pep Talk Of His Life

Raq is “setting” Kanan to murder his own father. She tells him that the detective is a threat to their family and their livelihood. Kanan is the perfect one to complete this hit because Detective Howard would never see it coming. She gives Kanan the pep talk of his life and teaches him how to properly use a Glock. “Glocks the real work. It’s for people who know what they gotta do. When you put someone down you gotta make sure they stay down. Hit’em twice where his heart beat at and once where he used to think.” Raq tells Kanan as she teaches him how to shoot the gun. She knows that taking someone’s life is serious business and she wants him to be thoroughly prepared.

Detective Howard is a bit emotional when he finally gets to meet with Kanan. He thinks it’s about to be a family reunion but when Kanan pulls out the gun, he realizes what’s going on. He tells Kanan that Raq is setting him up but Kanan will never believe a cop over his mother. Detective Howard doesn’t even get the chance to tell Kanan that he’s his son because Kanan immediately shoots. Just as they practiced, he quiets the detective’s protests with a bullet to the head.