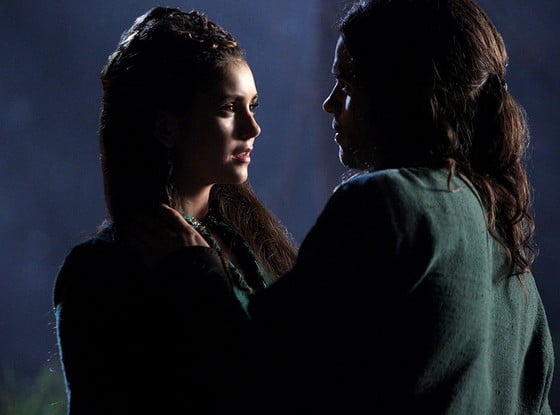 Last night’s The Originals was just about perfect.  If you watch this show for the action, there was plenty of gory bloodshed and fighting.  If you watch for the relationships, well, that Elijah and Hayley scene at the end was definitely a tease amongst other things.

If Klaus had actually gotten in the car and started driving after throwing Mikael in the trunk at the end of the last episode, things could have been much worse.  We saw Mikael was immune to Papa Tunde’s blade and he very easily could have turned it on Klaus.  Luckily, Cami has a heart and wouldn’t leave without making sure Davina was okay.

Speaking of Davina, it’s about time she discovered Kaleb’s true identity.  It’s still weird for me to think of Kaleb as Kol, maybe because Daniel Sharman‘s accent is so distracting.  Anyway, their alliance against the rest of the Mikaelson family will be interesting to watch develop.  Davina is no match for Esther’s powers alone but with Kol on her side they may be able to undermine her with some devious planning.

The Davina/Kol storyline converged nicely with everyone else’s as they all raced to help save Klaus.  Ultimately, Klaus was chasing after Mikael only because he took Cami and found that he even fed from her.  For that he vowed to kill his father but he never stood a chance before Mikael daggered him with the deadly white oak stake.  That’s where Davina and Kol came in handy, channeling the power from the stake not even knowing that it was in Klaus’ chest at the exact moment.

Of course, everyone has their own selfish motives behind this, but it did give me chills to see Davina, Kol, Marcel, and especially Hayley side with Klaus for just this once.  Mikael flees the scene now that he’s outnumbered after telling Klaus to come find him when he doesn’t have “fools, women, and children fighting [his] battles.”  I don’t know about you but I prefer to see a united front like this as opposed to the usual confusing chaos.

Poor Elijah is still suffering at the hands of Esther.  She’s reopening the figurative “red door” in his mind where he hides all the true horrors of his life.  We already knew that Esther made all her kids vampires but it was especially mind-blowing to see how she shaped Elijah into the man we’ve come to come to respect.  In his early days as a vampire, he accidentally drank too much from Tatia (guest star Nina Dobrev) and killed her.  Esther did what any mother would probably do if they could and made him forget his part in this as she convinced him it was her fault.

Talk about tough love parenting.  First she’s torturing him to relive the truth of Tatia’s death, then she plays on his fears that he’d be putting Hayley in danger next if he continues to lust after her.  Her most cruel form of punishment is allowing him to dream that he’s being saved by Hayley.  For the foreseeable future, I’m assuming any scenes with him will be in this dream world while Klaus and Hayley work together to actually free him from Esther’s control.

It’s easy to lose track of things with such a fast-paced episode.  To recap, Mikael is on the loose but Davina has the white oak stake he would need to kill Klaus.  Esther and Finn need Kol to make sure Davina leaves Klaus linked to the rest of his bloodline, which means she plans to wipe out almost the entire existence of vampires.  But what Mother Dearest doesn’t know is that Kol is only looking out for himself, and to some extent, Davina.

Esther seems content with waiting out Elijah’s dreams and is convinced he will beg for her to save him from his demons.  That better never happen because her plan requires a new mortal body and Daniel Gillies is a treasure we must never lose.  It’s bad enough we have to adjust to these new faces of Esther, Finn, and Kol.

Word on the Twitterverse is that Jackson will be back next week.  Oliver’s whereabouts are still unknown, but I hope Jackson helps Hayley and Klaus save Elijah instead.