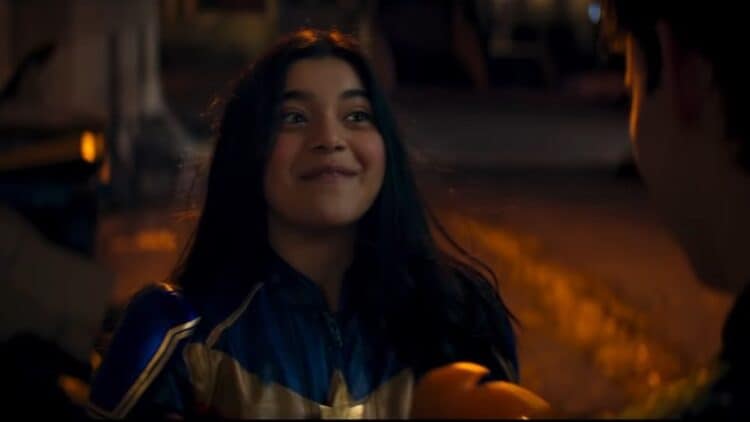 There are pluses and minuses when talking about Ms. Marvel’s premiere episode, and some of the minuses might sound petty, but they’re the type of elements that are bound to get noticed by several fans. The pluses on the other hand helped to balance the episode out and make things a little more even-handed. Meeting Kamala Khan was interesting since her take on the final battle in Endgame was a bit, well, biased considering that she argued for her favorite hero more than anything. In other words, Captain Marvel, her idol, was responsible for the victory all on her own, when in truth, most fans will recall that yes, Captain Marvel did come in late to the party, but she did so in awesome fashion by destroying Thanos’ ship on her own and then taking on the mad titan in a showdown that included several other individuals, who Kamala kind of fails to note. Hero worship is definitely a big part of this first episode, since to Kamala, Captain Marvel is the end-all, be-all of superheroes, much as she’s been built up to be since her arrival. Funny how she was given the keys to the kingdom, kind of, once the other heroes had been doing their thing for a while. But oh well.

Delving further into Kamala’s story it’s kind of evident that she has a rich fantasy life and an ego that conveniently pops up when she’s with her friend Bruno, who does appear to put her on a pedestal at times, even if it’s a small one that’s not that big of a deal. But where Kamala truly falls down at this time is the fact that she doesn’t exactly have the greatest relationship with her parents at the moment. Her brother has her back, which is nice to see, but between Kamala and her mother, there’s a great deal of animosity that feels oddly familiar but is the fault of both women as it’s seen that Kamala doesn’t yet know how to calm down and speak to her parents as the responsible teen she wants to be seen as.

There’s no doubt who the dominant parent in the house is since Kamala’s father simply wants to please everyone and enjoys when things go the way they should. But Kamala’s mother has a few issues to work through, and it’s easy to see that the combination of her parents and their personalities has created a slightly arrogant but also weird and optimistic young woman in Kamala. When seeking to attend the first ever AvengersCon, it does feel that she might have been able to convince her mother that her Captain Marvel costume, handmade, by the way, wasn’t skimpy in any sense of the word. But of course, the domineering mother didn’t want to hear it, especially after she’d made the effort to fashion Kamala a costume that emulated the Hulk, and demanded that her father, who was also dressed as the Hulk, go with her. In other words, Kamala’s mother is definitely a forceful presence that wants to keep Kamala safe and under her watchful eye. In the meantime, Kamala just wants to be her weird self and enjoy her life, which drives her mother crazy.

When Kamala and Bruno decide to attend the AvengersCon despite her mother’s refusal, she takes along a bangle that her mother told her was junk to complete her costume. The way her mother looked at the item though makes it kind of clear that the bangle is anything but junk, and it even brings her mother’s constant concern over her daughter into focus just a bit more. When it’s her turn to get on stage to show off her costume, Kamala places the bangle on her wrist, and things start to happen as a strange power manifests itself and Kamala is briefly transported to a strange, almost ethereal plane that shows a score of humanoid silhouettes with glowing eyes, before transporting her back to the present moment. It’s fair to say that she does and doesn’t ruin AvengersCon as her power manifests in a way that fans have been arguing about since the idea was revealed. But the moment she returns home, her mother is waiting for her, and the hurt seen on the woman’s face is hard to miss. But caring about it that much is even harder since it’s fair to think that she wants to keep Kamala safe, but her overbearing nature is tough to take.

Just from a neutral standpoint, it does feel as though the girl-power feel that was prominent in some scenes was evened out by the fact that Kamala is a fan that’s trying to live her own life and be unique. If this show continues along in this manner it’s not hard to think that it’s going to appease a lot of fans and perhaps irritate a few others, but it should hopefully be another success.