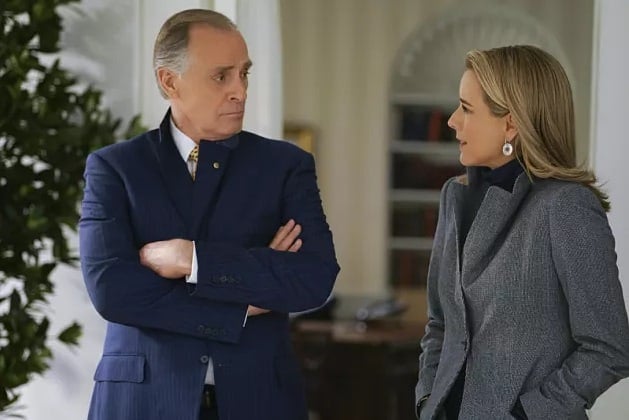 It’s all hands on deck in this week’s episode of Madam Secretary. Elizabeth stops Isreal from taking military action against Iran. It seems that the latter is planning some kind of nuclear activity and it does not sit well with Isreal. With Walter’s help, Elizabeth managed almost to keep the nuclear deal from breaking apart. Though I wonder who is responsible for shooting down the plane that was transporting the Iranian scientists? Was it Isreal?

Meanwhile, Russell Jackson is running around like a headless chicken. The president’s Chief of Staff is trying to get support from Congressmen for President Dalton’s re-election. He even enlisted Henry’s help in getting the latter’s former Marines comrade Jeff Pearson to switch from supporting Evans to Dalton. As a result, Henry managed to do just that, albeit the fact that he got hung over from too much drinking with Congressman Pearson. Then again, it was rather amusing to see the professor nursing a hangover. That and having his children tease him about it.

Speaking of Russell Jackson, Stevie wants him to write her a recommendation letter. She is trying to get it as soon as possible so she can submit her application to Harvard Law. When the Chief of Staff finally got around to meeting with the eldest McCord child, he told her that she shouldn’t go to law school because every single lawyer that he knows are miserable. Perhaps he hasn’t met the lawyers at Pearson Specter Litt. I have to admit, the part where Elizabeth and Henry tried to convince Stevie to go to UVA instead of Harvard was amusing. Elizabeth’s imaginary mic drop brought a smile to my face.

I have to admit, the part where Elizabeth and Henry tried to convince Stevie to go to UVA instead of Harvard was amusing. Elizabeth’s imaginary mic drop brought a smile to my face. Guess they were trying to get their daughter to go to the family school as it were. Shame it didn’t quite work out as they had hoped it would.

Circling things back to Isreal, Elizabeth tried to reason with Evans. The governor said that he’d rip apart the nuclear deal once he becomes president. Evans, of course, did not budge. Unbeknownst to him, their entire conversation was recorded, thus painting Evans in a poor light. Karma, anyone? I loved how Elizabeth kept her cool when Daisy told her that the sound people were going nuts over the recorded conversation. I hope that things will work out when the winter finale airs next Sunday. That and Russell will recover after his sudden collapse in his office at the end of the episode.

Elizabeth tries to stop a possible WWIII as she attempts to stop Isreal from taking military action in this week’s Madam Secretary. Stevie meets with Russell Jackson for a recommendation letter to Harvard Law.